You are at:Home»News & Current Affairs»‘Tide turns in favour of a new Ireland’ – by Michelle O’Neill
Social share: 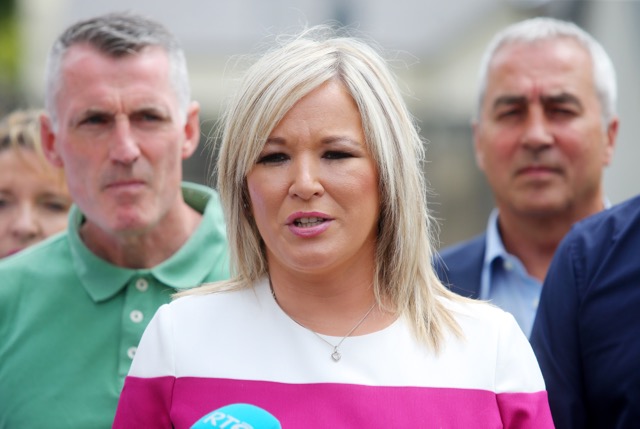 This weekend, Sinn Féin will hold the latest in a series of major conferences to promote, debate and discuss the new and agreed Ireland we are building every day.

Anyone who has attended any of the conferences to date, or followed the recent extraordinary growth in the Sinn Féin vote can be in no doubt that momentum towards reunification is building.

More voices are coming to the debate.

More and more citizens, commentators and politicians are advocating Irish reunification as the best way forward – the best way to protect future generations from the ravages of Tory cuts and the recklessness of Brexit.

In the recent Westminster election, unionist parties failed to secure 50% of the vote for the first time in the northern state, despite pitching it as a referendum on the union. If the result was a high water mark for unionism then the tide is certainly turning because the growing nationalist electorate has clearly turned its  back on Westminster and now see the future based on all-Ireland and European representation.

The trend is obvious. There is a growing nationalist and republican vote, there is a growing progressive vote that is looking for real change. The current high wire circus act at Westminster cannot disguise that trend.

The DUP and Tories are playing a short-term game that will damage our economy, our public services and make reaching agreement more difficult.

If the DUP are serious about representing the needs of citizens here, then they should be seeking to make accommodations with their neighbours on this island, not a Tory party with a microscopic vote of 3,892 in the North, and even less interest.

Sinn Féin accepts that it is up to us to convince unionists of the merits of a new Ireland and we are confident that we have the economic, social and political arguments to do so. We are convinced that no truly dispassionate and independent analysis of the case can come to any other conclusion than reunification as the best way forward for all our citizens.

Independent studies have already concluded that the island’s economy would benefit to the tune of €35 billion. Can any responsible political party really close their minds to that simply because it isn’t what they want to hear?

So we are not trying to coerce anybody into anything. We are simply seeking to advocate the case in a mature, responsible way and to have it heard in the same manner.

Unionism now needs to ask itself if it is as confident about the benefits of a union that has brought us Brexit, austerity, partition, conflict and decades of inequality and discrimination?

One way or another change is coming to these islands and there is a duty on all of us as political leaders to shape that change so that it benefits all citizens.

We do that by engaging, debating and discussing in a rational and respectful manner. It is Sinn Féin’s clear view that a referendum on Irish Unity is the best way to spark that debate and to have a genuine evidence-based discussion on what the new Ireland can offer.

People have a right to make informed choices on their future and their children’s future. What has anyone got to fear from that, particularly as it is our strong view that the new Ireland must embrace and protect the British identity and ethos for those who cherish it?

So let’s begin the process of shaping our future together. Tory governments will come and go. If they can look to buy unionist support today, they’ll be prepared to sell it tomorrow. There’s no long-term secure future for anyone here if we are beholden to the whims of a Westminster regime which has shown time and time again that it cares little for our needs, our hopes or our future.

The only thing we can be sure of is that we will always share this island together.

So let’s make it a place where we can all feel at home.

The Sinn Féin National Conference, ‘An Agreed Future?’ takes place in the Waterfront, Belfast at 12pm on Saturday June 24th. All welcome.

Social share:
Previous ArticleSTORMONT TALKS – WHEN WILL THE PENNY DROP? – By Brian Rowan
Next Article ‘The days of under the table deals, funny handshakes must become a thing of the past’ – By Clare Bailey MLA