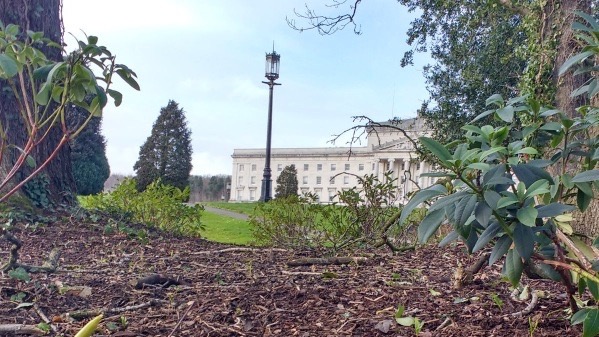 With just twelve days to go to the latest talks deadline, a document read by this website shows a determination on the part of the British Government to close the long-running political negotiation on legacy and move to public consultation.

The detailed draft paper – dated June 14th – has been shared with the five main parties and  is a summary of the current position in the talks.

It stretches across a range of issues, including programme for government, budget, equality and respect, legacy, relations with the European Union, RHI and also deals with transparency and accountability.

This website has been told that the parties have until Tuesday to respond.

In the legacy section, the government’s intention is clearly signalled – “the next step should be to consult the public”.

“The main negotiation on legacy is over,” one source commented.

As part of a consultation, there had been plans to publish a statement of principles on National Security. This will not now happen.

“We told them the [national security]paper was totally unacceptable,” one talks insider commented. 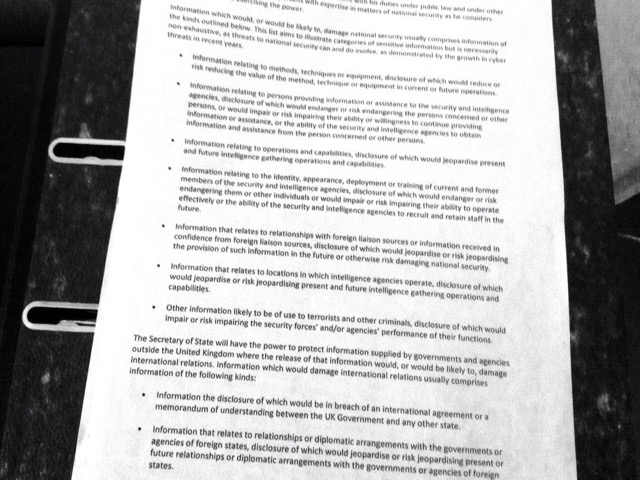 Image of national security document obtained by this website

This website has also read that statement of principles, previously shared with the parties. The National Security veto, which will decide what information can be shared in reports emerging from investigations and information-retrieval processes, is a continuing standoff involving the British Government, Sinn Fein and the SDLP.

It is certain to emerge in any public consultation, along with the funding for a legacy project.

The proposal is for a £150million package covering the Historical Investigations Unit, Independent Commission on Information Retrieval, an archive and reconciliation element. After two years, the funding proposal would be reviewed to be assessed whether sufficient.

Unionist concerns about that new Historical Investigations Unit (HIU) and a proposal from the Defence Select Committee for a statute of limitations are also likely to become part of any consultation.

In the latest paper, Irish language, Ulster Scots, an Armed Forces Covenant and the petition of concern are grouped under the heading Equality and Respect. 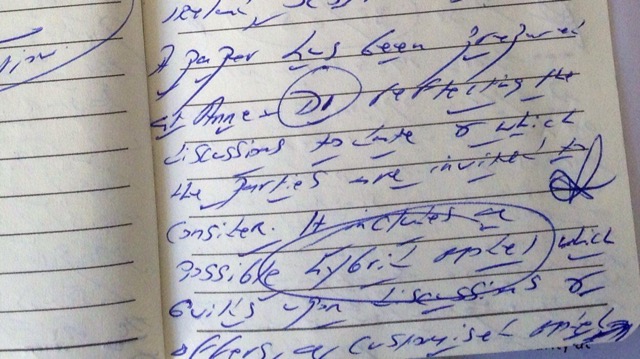 The Sinn Fein/SDLP demand for a stand-alone Irish Language Act has not changed, but the latest paper asks whether a unique hybrid model/option might merit exploration and discussion among the parties.

An immediate reaction from one republican did not suggest that this would work.

The publicly stated position of the SDLP is that the  way to solve these controversial issues is to reform the petition of concern, but there is not yet a consensus or agreement on the way forward.

This is made clear in the latest talks document.

Across several dozen pages, it identifies the key issues to be resolved and the gaps that have to be closed within the latest short time frame of a June 29 deadline.

There is much work still to be done and not much time within which to do it; the effort here in Belfast further complicated by those continuing separate talks involving the DUP and the Conservative Party.

For a second time in recent days, I have been told that if “a good agreement” can be achieved on the key issues in the Stormont Talks, then it would not be impossible to resolve the issue of Arlene Foster as First Minister.

The Sinn Fein position is that the DUP leader cannot hold Executive office until the completion of the RHI Inquiry, but a key source sees room for manoeuvre.

“Let’s think our way through it. Politics is the art of the possible,” he said.

But how much is possible in such a short time – in London and here?

And how final is this final deadline of June 29?

Can the Foster/Dodds leadership move the DUP to the point where an agreement is possible – to force SInn Féin into a rethink on Arlene Foster?

Might another Assembly Election still fit somewhere within this frame?

We are heading for another intense period of talks still not knowing what will be on the far side of all the documents and negotiations that are a part of trying to fix the broken politics of this place.

Social share:
Previous ArticleArlene and the Iceberg – By Brian Rowan
Next Article ‘Perfidious Albion’ ‘La perfide Albion’ and the DUP – by Eamonn Mallie