You are at:Home»News & Current Affairs»May and Politics in a Mess  – By Brian Rowan
Social share: 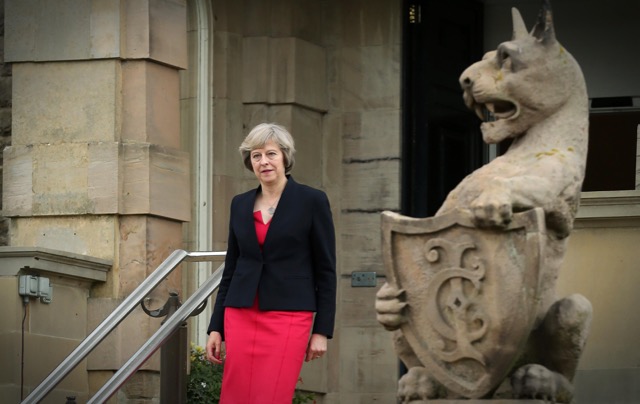 For now the DUP has a place on a big stage – a stage that is far from stable.

Those ten seats won when the counting was done in the early hours of Friday have put the Foster/Dodds leadership into a position of some influence.

The party has found its footing again after the stumbles and shocks associated with the March Assembly elections here when unionism lost its overall majority at Stormont.

But there is a calculation to be made.

Is a deal with Theresa May – some understanding however formal or informal – more important than the effort of trying to get an agreement with Sinn Fein to restore the political institutions at Stormont?

The Adams/O’Neill leadership is also in a position of strength.

“Nationalists and republicans have turned their back on Westminster and accept that the centre of political gravity is now on the island of Ireland,” Adams said in a statement on Friday.

In other words, this latest vote has endorsed the republican position of not taking seats in Parliament.

The only way the DUP will get a a deal with Sinn Fein at Stormont is on the basis of certainty and implementation on issues including an Irish Language Act, marriage equality, a Bill of Rights, agreement on a legacy process and if Arlene Foster agrees to step aside as First Minister until the completion of the RHI Inquiry.

Is the DUP in the mood for such a deal?

There has been no evidence of this up to this point. Now the party has a bigger number of seats and votes – a mandate to sit tight, almost 300,000 votes that will push further away any border poll.

Its got its confidence back – a spring in its political step that had looked flat-footed in recent times.

So, agreement at Stormont may have to wait.

What then could the DUP squeeze out of some understanding with Theresa May on Brexit and on the legacy question – specifically on concerns about the investigation of soldiers and police officers relating to the conflict period?

Is there more to be gained in these talks?

This is the calculation that has to be made.

Sinn Fein raised concerns about the talks that James Brokenshire chaired in recent months – seeing the Northern Ireland Secretary in the role of player and not facilitator.

How much more suspicious and questioning would they be of a Government Minister relying on DUP support?

Nothing that Theresa May has said in the past few hours has sounded confident or convincing.

The stage upon which the DUP has a place is not on solid ground.

Who would rule out another election in the not too distant future, a Brexit mess, the political institutions here remaining stuck in some political limbo?

The numbers have changed – not the issues.

Theresa May speaks of certainty.

Whom is she trying to kid?

There is no certainty in London or in Belfast.

Politics is in a mess.