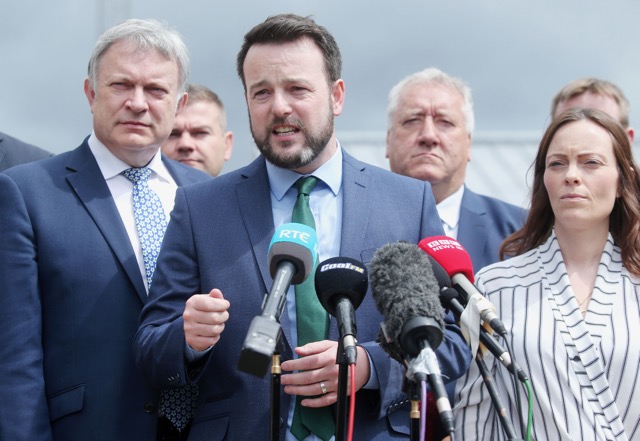 The talks at Stormont Castle are grinding on into another weekend as the deadline for a deal draws ever nearer.

As I said on Wednesday, all of us are wise to the game at play and a deal will have to be struck at some point whether it’s next week or in the autumn – so let’s get on with it.

I know that easy cynicism suggests that the return of local devolution isn’t urgently relevant to the lives of people here. Easy cynicism always ignores deeper and longer consequences. As the talks process drags on and on, the polarisation of our politics grows deeper by the day.

In the aftermath of the recent elections I described Northern politics as having locked itself into an arm wrestle which no-one could hope to win. We shouldn’t fool ourselves into the belief that the tension and consequence of that battle is contained to the hill at Stormont – it has a trickle-down effect across our society.

As the North reverts into vivid political segregation at Stormont Castle – that same segregation is playing out on our streets.

That was witnessed this week with the erection of paramilitary flags in mixed communities in Belfast. You would hope and imagine that this would be met with an easy answer. Illegal flags glorifying illegal organisations should be removed – there should be no room for ifs or buts.

Instead the new MP for South Belfast, Emma Little Pengelly, tells us that she sees no demand to remove UVF flags from this shared housing estate. The DUP MP couldn’t bring herself to say that they should be taken down. This was Mrs Pengelly’s first test and already she has proven her inability to be an MP for all the people of South Belfast.

The fact that this failure of leadership came from a former junior Minister in OFMdFM, directly responsible for developing policy for shared spaces and a shared society, is revealing as to why we have moved so far away from pursuing real reconciliation.

The SDLP has, for years, advocated a system of regulation which would address flag flying, particularly on arterial routes and in such diverse and well integrated areas. The recommendations of the commission on flags and identity must play an important part in removing any ambiguity or excuse which allows the flying of illegal flags to continue.

As we know though, this problem will never be resolved through the implementation of policy alone. One of the most common shields used to defend the mass flying of flags across the North, even paramilitary flags, is that they are part of people’s ‘culture’.

If we continue to leave that argument unchallenged then we run the risk of holding on to everything forever – no matter how corrosive and no matter how ugly. Years of tradition aren’t an excuse for years of symbolic bigotry.

Northern politics needs to develop the maturity to understand that cultures don’t have to be permanent. Things can change but we need to firstly free ourselves to that possibility.

These old battles of culture and identity give definition to the crossroads in which our politics now finds itself. As the constitutional debates of Brexit continue to work their way across both our islands, the choice boils down to either renewing our old division or returning to the road of meaningful reconciliation.

No deal next week means – facing into another summer of segregation – and once again people will pay the price for the failure of our politics.

Social share:
Previous ArticleADAMS “wants to clear up this mess” – By Brian Rowan
Next Article STORMONT – we don’t need another false start… By Brian Rowan