You are at:Home»News & Current Affairs»Could the DUP’s ‘Big Bang Deal’ with the Conservatives blow up in both their faces? – By Eamonn Mallie
Social share: 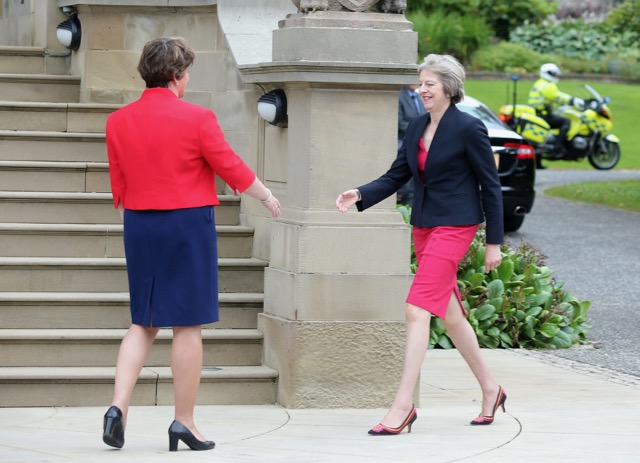 During the Depression in the Thirties in the US ‘Pennies from Heaven” guaranteed:

‘And every time it rains, it rains, pennies from heaven (shoob doobie)

You’ll find your fortune fallin’ all over the town

Be sure that your umbrella is upside down.’

Northern Ireland umbrellas are ‘upside down’ this evening.

Mrs May has not portrayed many of the traits of Saint Teresa of Ávila in her handling of her brief in recent months but she has left something for us all in her will.

Is there any guarantee that the vicar’s daughter will be around to deliver these pounds and pence?

A Sky reporter invoked the use of the term ‘bribe’ on air today. I would not be so crude as to recourse to this language as it is an allegation to which I could not possibly subscribe myself on the advice of my learned judge friend.

This is a staggering price however to pay for power using taxpayers’ money from throughout the rest of the UK. Is it any wonder SNP leader and Scotland’s First Minister Nicola Sturgeon labelled this package “the worst kind of pork-barrel politics?”

So what are the implications of this money from heaven for Northern Ireland?

The money is front loaded over two years dedicated to new infrastructure, help for an ailing health service, protection for pensioners’ income and a guarantee on winter fuel payments. Who could turn their face against this?

What then might be the price to be paid by the DUP in buying into this deal? Conceivably that party is now tethered to the Tories irrevocably for the life of this government. The sun is shining for them today but that party will have to live with Tory warts and all down the road.

What charlatans or cads the DUP would turn out to be if they welshed on their part in what is essentially ‘a Big Bang deal.’

What a pathetic defence of the indefensible we heard from former Northern Ireland Secretary of State Theresa Villiers squirming and wriggling as she sought to justify her government’s cosy little deal with the DUP.

The hopelessness of Ms Villiers’ defence was only matched by the feeble efforts of First Secretary of State Damian Green who in an interview with Gary Gibbon on Channel 4 News failed to convince us that this deal was anything other than ‘buying votes.’

Claiming that ‘special financial deals’ had been necessary in Northern Ireland in the past was a bogus argument. No special financial package was actually ever delivered to secure the survivability of any British government.

‘Sunny Jim Callaghan’ attempted to woo Ulster Unionists in 1979 but only won the backing of John Carson and Harold McCusker. The government collapsed and Mrs Thatcher entered 10 Downing Street.

Will the DUP dine out on the monies squeezed out of the Tories come the day?

You bet – and no-one could blame them.

Back to the ‘Hill’ now. Is there a rabbit to be pulled out of the  hat? We will know soon.

Social share:
Previous ArticleHEAVY LIFTING – and NOSES OUT OF JOINT – By Brian Rowan
Next Article Without a Stormont deal “Sinn Féin’s only relevance in NI politics will be at council level” – by Peter Robinson