You are at:Home»News & Current Affairs»Arlene and the Iceberg – By Brian Rowan
Social share: 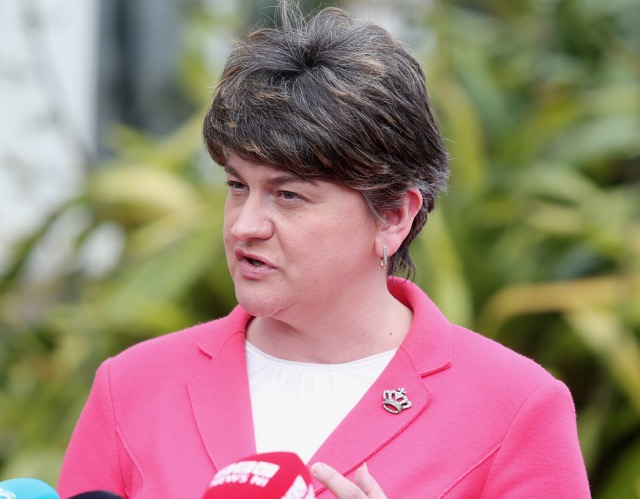 What if Sinn Fein can get what it needs on the Irish language, marriage equality, and a bill of rights?

What then the prospects for a deal at Stormont?

With talks set to develop in London, Belfast and Dublin, there are, of course, other important questions.

Among them, what a proposed legacy process will look like; the structure within which the conflict period will be addressed.

In the course of protracted negotiations, it has become clear that Sinn Fein is not going to break the British Government on the national security question. That veto will remain on what is disclosed in reports from the information-retrieval and investigation processes.

It seems the best that will emerge from any talks at Stormont is a public consultation on a plan for a new Historical Investigations Unit (HIU), an Independent Commission on Information Retrieval (ICIR), the planned archive for stories and the proposed reconciliation element.

What is not yet clear is how a recommended statute of limitations, a proposal from the House of Commons Defence Select Committee in April, might yet play into this legacy debate.

If accepted, this would cover “all Troubles-related incidents, up to the signing of the 1998 Belfast Agreement, which involved former members of the Armed Forces”.

Before the General Election, the Committee encouraged the next Government “to extend this provision to include former members of the Royal Ulster Constabulary and other former security personnel”.

These are now decisions for Theresa May’s government, a government weakened in last week’s General Election and now relying on the support of the DUP and its ten MPs.

In other words, those incidents involving not just security forces but republicans and loyalists that predate the April 1998 agreement. It would be a hugely controversial move. For statute of limitations many would read amnesty.

This is one of the developments for which we will be watching,not just in the talks between the governments and the parties over the next couple of weeks, but as the DUP/Tory relationship and understanding develops.

This is the ‘iceberg’ factor. What will be seen and unseen in any emerging agreement?

Then there is the Arlene Foster question – that  Sinn Fein demand that the DUP leader cannot serve as First Minister until the completion of the public inquiry into the RHI debacle.

Is there any room for compromise on this? “Depending on the deal,” one source responded – meaning depending on how much implementation certainty and agreement there is on those other unresolved issues highlighted by Sinn Fein.

This takes us back to an Irish Language Act, marriage equality, a Bill of Rights, a proper partnership within any new power-sharing Executive and that legacy question that is not going to be settled to the satisfaction of all.

Depending on the detail of any proposed agreement within this frame, then there is a hint, a suggestion that a “workable” deal with Arlene Foster as First Minister might be possible.

It is no more than an opinion at this time, but offered by someone who will be a significant and influential voice when it comes to republican decision making.

Others – more senior – may take a different view.

So, can the DUP move sufficiently on the issues above to at least ask the question of Sinn Fein? We still don’t know.

The group that coordinates the Stormont Talks was meeting on Wednesday afternoon to shape the schedule for the period ahead, and the five party leaders will meet Theresa May and Secretary of State James Brokenshire in London on Thursday.

“The DUP are not going to miss this opportunity,” a talks insider commented – meaning this opportunity to squeeze something out of the Prime Minister, including a financial package.

“She [Arlene Foster] will use Theresa May to pressurise the rest of us,” this source added. Arlene Foster with Nigel Dodds met the Prime Minister on Tuesday – part of this shaping of some understanding with the May Government –  and will be back in Downing Street on Thursday.

“Progress will not come from a deal between the DUP and Tories to prop up a government in Westminster with an austerity and Brexit agenda, but through the full implementation of the agreements and an Executive that respects the rights and delivers for all in society,” Sinn Fein’s northern leader Michelle O’Neill said in a statement on Wednesday.

“We’ve already warned Theresa May that any backroom deal with the DUP could undermine the Good Friday Agreement,” SDLP leader Colum Eastwood told this website – “and we will be telling her very clearly our priorities for getting a government back up and running.”

Robin Swann and Naomi Long will also meet the Prime Minister on Thursday – and then the focus will return to the deadline of June 29 for that devolution deal.

Might an autumn Assembly Election – one that would allow the DUP to restore its position of strength at Stormont – yet be part of the equation?

It is in that mix of speculation – the thinking out loudly that is part of the latest political conversation.

There is no suggestion, however, that it is in the thinking of the Secretary of State: “There is very little time left,” James Brokenshire said in a statement. “An agreement to restore devolved power sharing government in Stormont must be reached by the 29 June deadline.”

This is the next push – a 15-day frame – to try to get a deal. How much more will we know about Arlene and the ‘iceberg’ when we get to that next deadline?

Will we be any closer to an agreement? As always, the devil is in the detail.