You are at:Home»News & Current Affairs»Sinn Féin ready to form Executive but not on DUP terms – By Michelle O’Neill
Social share: 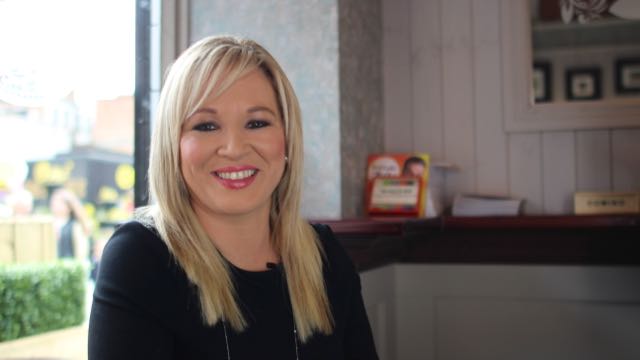 Just ten weeks ago in the Assembly elections, the people of the North overwhelmingly backed the need for change.

They endorsed Martin McGuinness’s position that there had to be an end to political corruption, to disrespect and inequality towards sections of our community.

We will go to the polls again on June 8th and those issues remain unresolved.

Nevertheless, Arlene Foster is correct when she says the Executive could be re established tomorrow.

But only if her party addressed those issues today, because it is the DUP who are refusing to honour past agreements and to accept that all citizens have the right to be treated on the basis of equality and mutual respect.

That is what needs to change for an Executive to be formed. Martin McGuinness made that clear and the people supported him.

Arlene Foster’s engagement with the Irish language community is a welcome step in the right direction.

While Arlene was engaging, the DUP’s grouping on Belfast City Council was opposing very modest Irish language provisions and Gregory Campbell was insisting there will be no Irish Language Act.

So, Arlene may have taken the first step but she clearly still has some way to travel in order to restore public trust and confidence.

This is the context in which the Westminster election is taking place and I have no doubt the public will remember that when they cast their votes.

They haven’t forgotten the RHI scandal, the sectarian decisions on Líofa, bands’ funding and community halls.

They haven’t forgotten that the DUP is the party of NAMA and the ‘dark money’ from anonymous donors to support Brexit, which is of course the primary issue in this election.

Just as they would like to wish away the result on March 2nd, Theresa May and the DUP want to disregard the wishes of the majority of people here who rejected Brexit in the June referendum.

Fifty-six percent voted to Remain because they know that Brexit will be a disaster for our economy, for local business, for farmers and the agri-food industry, for the health service, for workers’ rights and for border communities.

Sinn Féin stands with the 56 percent. We stand against a border, against Tory cuts and against Brexit.

We are the only party to have presented a realisable, credible alternative to Brexit which is for the North to be designated special status within the EU.

Sinn Féin has already secured support from the majority of parties in the Dáil for our proposals. Our all-Ireland team of MEPs are working to secure the same at the EU parliament. We have been engaging with all the other member states and I am meeting the EU’s Chief Negotiator for Brexit Michel Barnier on Thursday.

That is how we will win the case for special status within the EU – by taking the fight to where it matters and to where our case will be heard – not to the green benches of Westminster to be ignored by a British Prime Minister who has already dismissed the democratic wishes of the people here and in Scotland.

An enhanced vote in this election strengthens our hand to do that while also helping to ensure there is no return to the status quo in Stormont.

It will send a strong message that the North is still opposed to Brexit and that our people still demand progressive change – that they still demand equality, respect and integrity.