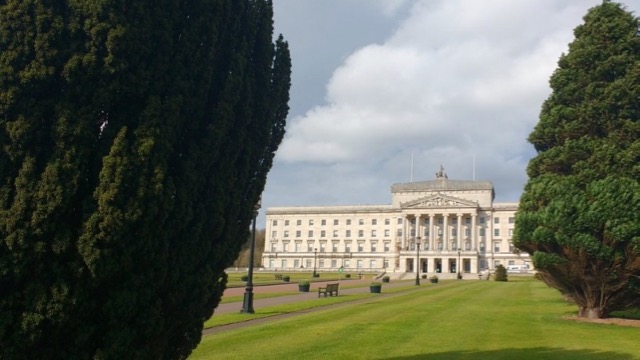 In a briefing at Stormont Castle on Tuesday afternoon, Gerry Adams listed the issues that need to be settled if the political institutions are to be restored.

They were set within a rights-based frame – Civic Forum, Bill of Rights, marriage equality and an Irish Language Act.

Adams also described considerable stumbling blocks on the legacy question – national security as a British “get out clause” and the refusal to fund inquests.

But could there be a return to devolution without the legacy question being settled?

“Arguably, yes,” was his response.

Not definitely yes or certainly yes.

Any agreement without a legacy deal would be on an “infirm basis” and would not be a fresh start.

But the legacy battle is not with the DUP but rather with the British Government. 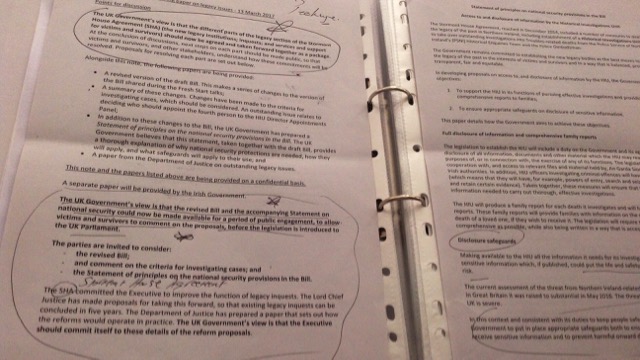 We know from documents obtained by this website that the Government is steering this issue towards public consultation or, perhaps, just steering it further down the road.

There is no shift in the national security stance.

Adams and Michelle O’Neill were speaking to journalists not long after suggestions began to emerge at Stormont of a soft landing plan to avoid a Good Friday disagreement.

Both Sinn Fein leaders said they knew nothing of this, but other sources are pointing to a pre-Friday move to pause the talks, which would resume for a short period after Easter.

Yet more talking, but to what end?

Neither Adams nor O’Neill gave any hint that an agreement was close or even closer.

And, if there is no agreement on that list of rights-based issues?

Well, Adams was clear. “Well sin é” he responded. There would be no return of the Assembly and the inter-connected institutions.

On Monday, the DUP told Sinn Fein that they doubted that they wanted a deal. Senior republican leaders had been pointing to an election if there was no agreement by this Friday.

There is no sense of the type of urgency within these talks that the making of such a comprehensive agreement and implementation plan would require.

Indeed, on Tuesday, Ulster Unionist leader Robin Swann spoke of the need for “a change of tempo”.

The deal that is needed this time, might be too much to hope for – certainly in the here and now and in the aftershock of an election in which the unionist majority disappeared.

These talks are not just about the issues that have to be resolved, but the fact that Sinn Fein has not moved on its publicly stated position that it will not serve in an Executive with Arlene Foster until the report of the RHI public inquiry is delivered.

Unless there is some dramatic, unexpected development in the days to come, these talks appear to be running out of road.

Adams and O’Neill appear under no pressure. They are not interested in a bad deal.