You are at:Home»News & Current Affairs»“An anti Brexit coalition to fight General Election was worth exploring” – By Colum Eastwood
Social share: 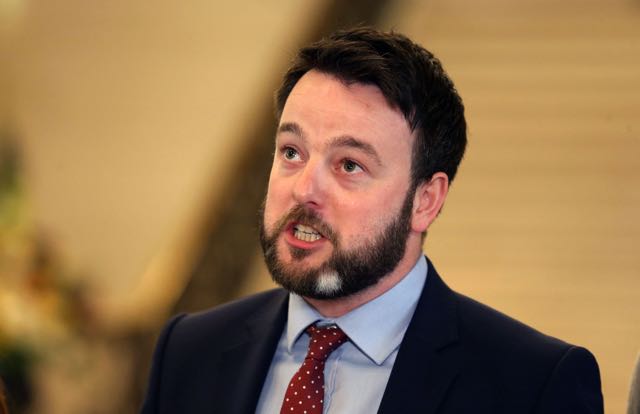 In proposing an anti-Brexit coalition I always knew I was potentially throwing seeds on stony ground.

The politics of the North has never offered the best environment to grow new ideas and build new coalitions – and so it has proven once more.

I remain absolutely convinced that an anti-Brexit coalition was worth exploring. I still think it was worth a try.

Why do I believe this?

I think Brexit will directly or indirectly consume every aspect of our immediate political future. In saying this I am all too aware that politics is naturally rich with exaggeration, especially at election time, but there is no exaggerating the scale of the threat and the change which Brexit will bring.

People in Northern Ireland, nationalists and unionists alike, voted to remain part of the European Union. Amongst all the complexity, it is that simple.

Yet in this snap election the British Prime Minister is determined to strengthen her hand in order to implement a hard Brexit here – outside the single market and outside the customs union. That can only bring one outcome – a hard border in Ireland.

Theresa May is determined to impose a future upon Northern Ireland to which we have not given our consent.

This is the seriousness of the political context we all face. That is why over the course of the last week I initiated a discussion to explore whether co-operation was possible between the pro-Remain parties to reflect our opposition to a hard Brexit and our support for special circumstances in the North.

As has now unfortunately become clear it has not been possible to construct a broad based coalition which would fight against Brexit and represent the majority of people here who voted to remain.

This is deeply disappointing and it is important to outline some of the reasons as to why that happened.

I obviously knew that Westminster abstention would be an issue and the Green Party made clear from the outset that this was a potential deal breaker.

In fairness to Sinn Féin they make their abstentionist position clear at every election – just as we in the SDLP make clear that we see the value of representing our constituencies and ensuring the Irish nationalist voice is present at Westminster.

With the specific conditions generated by Brexit I had hoped there may have been some room for manoeuvre. I was mindful of the words of the veteran Sinn Féin politician Mitchel McLaughlin who always maintained that ‘abstention from Westminster is not a fundamental republican principle’.

In the context of Brexit, in the context of the threat of a return of a hard border in Ireland and in the context of a broader coalition of anti-Brexit-MPs from the North and from the SNP in Scotland, I had hoped that Sinn Féin might seek to tactically review their abstentionism stance in order to defend the interests of all of our people – even if only on specific votes.

However, Sinn Féin made it clear that they are not of a mind or not in a position to change their stance.

As a compromise I proposed that non-party, non-abstentionist candidates could challenge sitting pro-Brexit MPs in constituencies in which there had been a Remain majority last year. This was designed to ensure that no political party be seen to individually benefit from an anti-Brexit coalition.

This morning Sinn Féin also rejected this proposal and thus it became clear that agreement wasn’t going to be possible.

There were obviously other obstacles too. The proposal by the Green Party that a current SDLP MP stand aside was always a non-runner and perhaps was always intended as such. Alasdair McDonnell has worked tirelessly against Brexit at Westminster and is by far and away the best candidate to continue that fight as the current and future MP for South Belfast.

In fairness though to Steven Agnew, at least he was up for a conversation. The Alliance Party undoubtedly did damage to the proposal of an anti-Brexit coalition by instantly naming it as sectarian. That extreme tone continued with a statement from an Alliance party ‘spokesperson’  which referred to the Green Party being ‘tainted by nationalism’ for even talking about an anti-Brexit coalition.

As if it even needed to be said out loudly  – that Alliance ‘spokesperson’ should consider the radical notion that it is possible to be a nationalist, anti-Brexit and anti-sectarian all at the same time.

It is important to say that I know that particular statement doesn’t reflect the many good people who make up the Alliance party and I would be genuinely surprised and disappointed if Naomi Long approved its release. However it is also important to say that in future all of us in northern politics should resist the urge to throw out the serious accusation of sectarianism every time we might feel a twinge of political pressure.

I would also like to address why I have refused to enter into a pact with only Sinn Féin – since I know I am already facing some criticism from republicans.

It might surprise some of those venting that criticism to know that my reasoning for rejecting a nationalist pact is largely based on my own republican beliefs. I do not believe in mirroring a unionist pact with a nationalist pact because I believe it would prove damagingly counter-productive in the medium to long term.

The SDLP’s nationalism, our attachment and loyalty to the Irish nation we wish to see and build, will always include a place for unionism.

I do not believe in backing unionism into a corner either electorally, politically or culturally. This is all the more crucial when the possibility of persuading others towards a new and agreed Ireland is all the more real and relevant as the constitutional future of these islands hangs in flux.

It is this broader context to the election which demands we all challenge ourselves to think bigger and broader than before. This period in our politics isn’t just about the North or the rest of the island.

As I said repeatedly during the week, Scotland and Ireland are in this together.

I can give clear assurance that every SDLP MP elected will join with the SNP to represent the Remain majorities in Ireland and Scotland. That is the unique offer we can give to each voter at this election.

Attempting to build an anti-Brexit pact was about maximising the strength of that broader coalition. That is why, even though it didn’t succeed, it was worth a go.

Attempting to build that new coalition was also a first step in acknowledging that our politics will rapidly need to realign its positons and its priorities. The out-workings of Brexit guarantee that we will all be faced by a canvass of change.  I think the time ahead will increasingly challenge us with a lot more of the unprecedented and the uncomfortable.

Opening ourselves up to that evolving reality is the only way to carve a political path beyond the North’s traditional stony ground in which nothing new grows.

Social share:
Previous ArticleWhy the Green Party is staying clear of pacts – by Steven Agnew MLA
Next Article “Take this message to Arlene” – By Eamonn Mallie