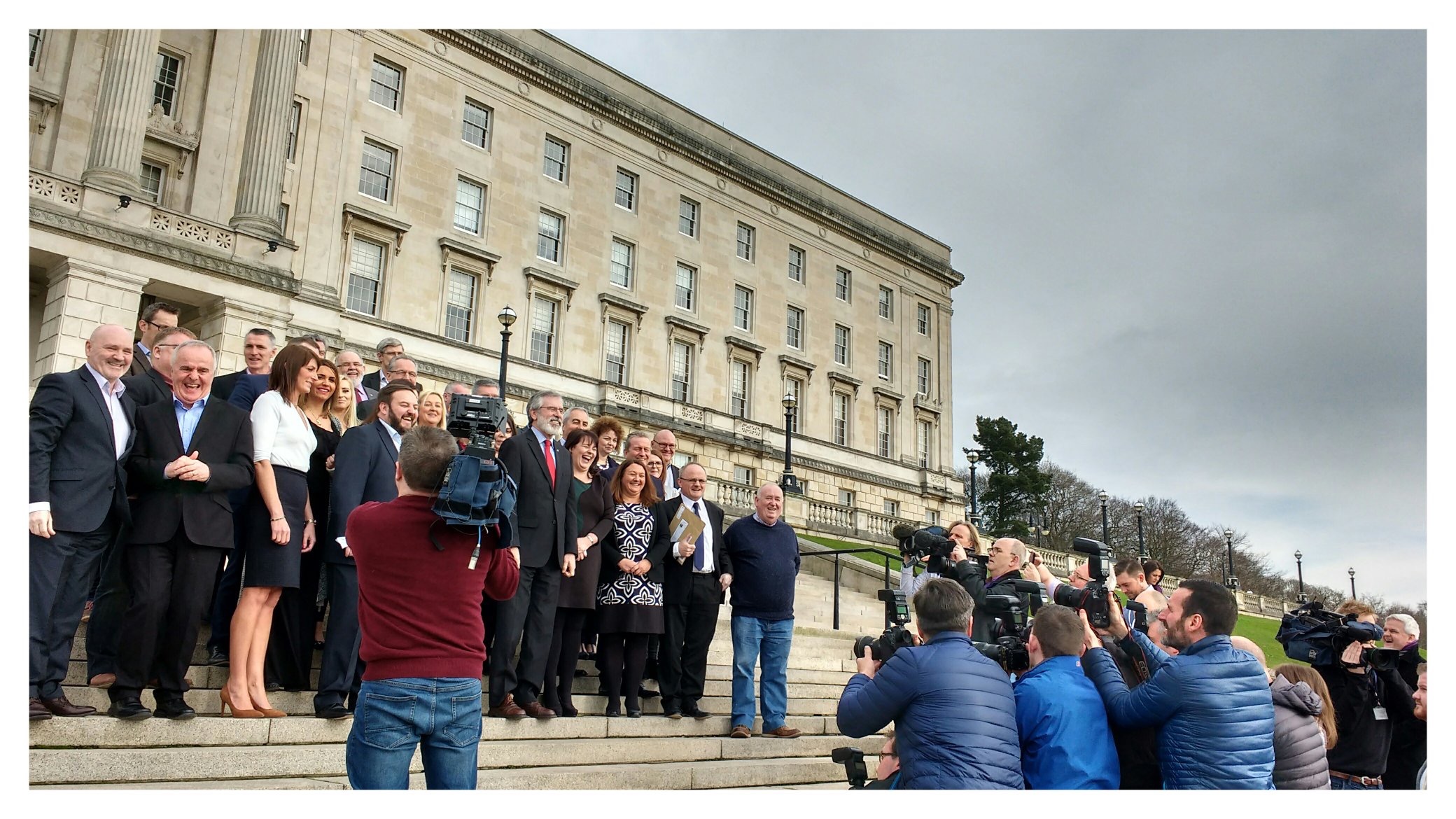 That picture pose on the steps of Parliament Buildings yesterday told the story of the day.
There is a new spring in the Sinn Fein step.

Within this smiling frame, Gerry Adams and Michelle O’Neill stood at the front.

Moments earlier, the party’s northern leader had said a few words – making the point that this was not Groundhog Day, nor would it be business as usual.

Ms O’Neill was adding to earlier comments by Gerry Adams, in which he put a focus on the British Government.

“If the recent statements by both James Brokenshire and Theresa May are to be taken at face value it would seem that the British Government is determined to repeat the mistakes of the past,” Adams said.

Brokenshire met the parties throughout yesterday. There is talk of a two-baskets approach.

Within one, issues such as a programme for government, budget and nominations to the Executive – the other, holding the unfinished business that has been re-cycled, re-worded and re-worked through numerous previous negotiations, including the weighty subject of a legacy process.

Can you have an agreement on the past without loyalists? Are they involved in these talks? No is the answer to those questions.

On Monday, there was also much talk about Arlene Foster, after an election in which the number of DUP seats fell by ten and unionists lost their overall majority within the Assembly.

Across the 18 constituencies, when the counting was done, a little over a thousand votes separated the DUP and Sinn Fein.

Mrs Foster pointed to her party’s tally of 225,413 votes and dismissed talk of a revolt within the DUP.

There is the other issue of Sinn Fein’s refusal to serve in an Executive with the DUP leader until the report of the public inquiry into the RHI debacle has been delivered.

This issue does not have to be addressed immediately. If an agreed implementation plan on past agreements cannot be achieved, then there won’t be a government or First and Deputy First Minister.

Will those parties be prepared to re-enter the Executive if an agreement is reached?

It is too early for an answer to that question.

These talks are at a preliminary stage. Monday was a day for people to get things off their chests.

Can all that needs to be done be achieved in a three-week time frame?

Such is the scale of the task, that seems unrealistic – unlikely.

Do the British and Irish Governments understand this crisis and the work that needs to be done?

My colleague Eamonn Mallie has described their approach as “casual”. That needs to change.

A DUP insider told me he believes it will take months. A republican used the term “elastic” to describe the deadlines of this place.

There is agreement on something. That devolution is the preferred option over direct rule.

Then there is the challenge of Brexit.

So, this time, this process needs an agreement that won’t lead to another false start and yet another crisis.

It needs proper time to get this right.

As he headed towards talks with Brokenshire yesterday, one of the talks participants quipped: “We’ve seen this deja vu before.”

What will we see at the end of these talks?

Social share:
ae17 Sinn Fein
Previous Article‘The Long Wait that Paid Off’ – By Clare Bailey
Next Article “Too many unionist leaders and representatives behave like a mouse in search of a cat” – By Terry Wright