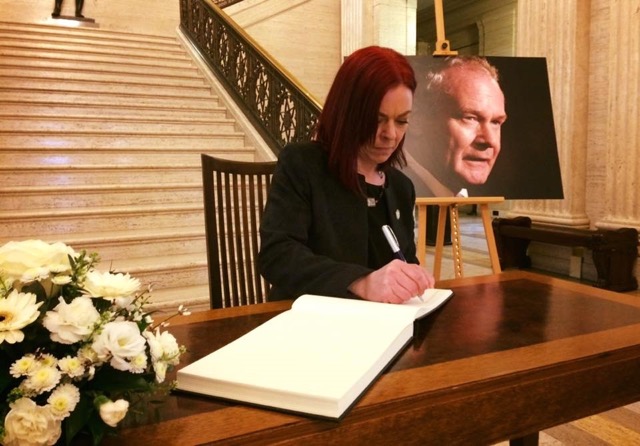 The legacy of our past – a neat little phrase which belies an enormous and complex problem to which we need to get to the core. It’s so high we can’t get around it, so low we can’t get under it and so wide we can’t get round it. A possible solution might be to go through a gate, if one existed.

It’s wrong to talk about victims and survivors of our past as a homogeneous group. No such group exists due in part to the fact that our conflict was not  simple or straightforward. Politicians sometimes speak about our past in binary terms; good, evil, black, white, innocent and guilty. That doesn’t work for me, things were messy and extremely ugly during our conflict.

One factor that unites victims and survivors is that they have all been failed by our post conflict political system. The impact of that failure on wider society has been catastrophic. It inhibits political progress, as demonstrated by the current political impasse. There is no doubt that dealing with the past is difficult – it encompasses grief and bereavement, which is often complex. Complex grief is linked with traumatic events and can give rise to post traumatic stress disorder. Trauma is not something that can be overcome by politics. It is personal and there is no one size fits all, simple solution.

Most of us will have experienced or will experience grief at some stage in our lives. That grief doesn’t disappear, we just learn to live with it. Complex grief is something entirely different and can cause significant distress and mental and physical impairment.

This distress and impairment have become intergenerational. Alcohol and drug abuse, mental and physical illness, and socio economic problems are often the outworking of the failure to address the legacy of our past. The areas which took the brunt of the conflict remain the most economic and socially disadvantaged in Northern Ireland, even after 25 years of our peace process. The problems have become ingrained and deep seated for our next generation.

The ongoing Stormont talks show that we can’t get around, under or over these legacy issues. When we have some politicians who were players in the conflict, when we have political parties who are founded on an ideology of division or sectarianism, how can we have faith that they can move us forward in any sustainable way?

This current round of talks is the seventh attempt to deal with legacy issues. Good Friday, St Andrews, Eames-Bradley, Hass, Stormont House, Fresh Start and now. Agreement and compromise have been reached before and deals signed off but yet here we are again. How long will we allow this to go on and to what cost?

We need outside assistance and I believe that an international, independent model or system of truth recovery could provide the gate. Post conflict transformation and truth recovery systems were instituted in South Africa, Kosovo and Rwanda. The systems have made a positive contribution to peace building and cohesion. Meanwhile, the Northern Ireland peace process is held up as a beacon around the world and yet we continue to allow communities, families and individuals to be poisoned by the grief and pain of the legacy of the past.

The British and Irish governments must acknowledge that their participation in the conflict means that an international dimension to truth recovery is essential. Are they waiting for victims to die before they are offered any form of truth recovery? If so, that approach is exceptionally cruel and contrary to natural justice. And, it doesn’t work, the complex grief doesn’t go away, it simply slithers across from generation to generation. Perhaps now is the time to separate our political process from a legacy process and do all we can to create the peace needed for those still suffering.