You are at:Home»News & Current Affairs»Opinion»‘Petition of Concern procedure should be banished’ – By Jim Allister
Social share: 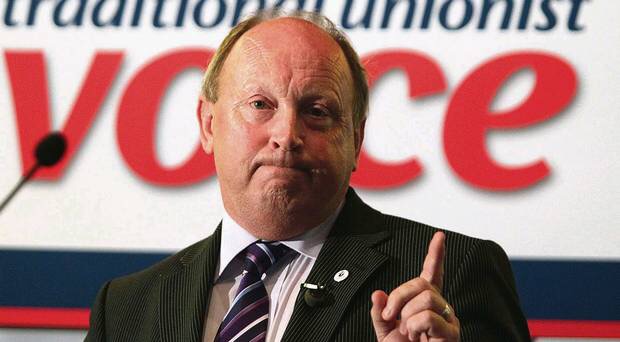 Stormont has never been held in high esteem by the general public.

It’s clear Republicans see this as an opportunity to further their agenda. Having said that Stormont will not return unless they get serious concessions, the danger for Unionism is that DUP will oblige – as they did when forced by Sinn Fein to climb down over the Liofa funding.

The DUP is in concession mode and that £50,000 to the Irish language is just the start.

Upon What else will they roll over after an election to get their jobs back? An Irish Language Act? The Maze? Allowing Sinn Fein to rewrite the past? Remember – just a few weeks ago Ian Paisley Junior lauded IRA Commander McGuinness as a peace maker who saved lives.

Now during the election they scaremonger about Gerry Adams’s Sinn Fein taking the First Minister’s post. Of course, the First and deputy First Ministers are equal. One cannot do anything without the other. In fact, the election was caused because once McGuinness resigned Mrs Foster was out on her ear too. Remember that last October neither Adams nor Sinn Fein was mentioned once in Arlene Foster’s conference speech. How soon after the election will the DUP and Sinn Fein kiss and make up? And at what cost for Unionism?

TUV has long argued that the present structures at Stormont are incapable of working and only operate at all so long as Sinn Fein want them to.

TUV has a clear vision of what will work and provide durable government. It is voluntary coalition with an Opposition. This does not deny cross-community government. With no party big enough to govern on its own, coalition is inevitable. Those, after an election, who can agree a programme for government and can command the requisite majority, form the government. Those who can’t agree form the Opposition.

To ensure cross-community involvement, TUV would accept a weighted majority of 60% in an Assembly vote to approve the new government and its programme.

The much abused Petition of Concern procedure should be banished, along with designations which entrench sectarian divisions.

If this isn’t possible then we should have government by British ministers, but with the vital distinction from the Direct Rule of the past that they would be accountable to the Assembly.

In practice this means that the British ministers would introduce their legislation to the Assembly.

Individual MLAs would still have the opportunity to introduce Private Members’ Bills.

As for the British ministers’ exercise of executive functions, these would be subject to all the scrutiny powers of the Assembly.

Clinging endlessly to the failure of mandatory coalition is not serving Northern Ireland well.
The perpetual cycle of crisis and sticking plaster talks, before lurching to crisis again is destroying the body politic and public confidence in it. It is time for fresh thinking.