You are at:Home»News & Current Affairs»Opinion»‘Partnership not Domination’ – by Mike Nesbitt, Leader of the Ulster Unionist Party
Social share: 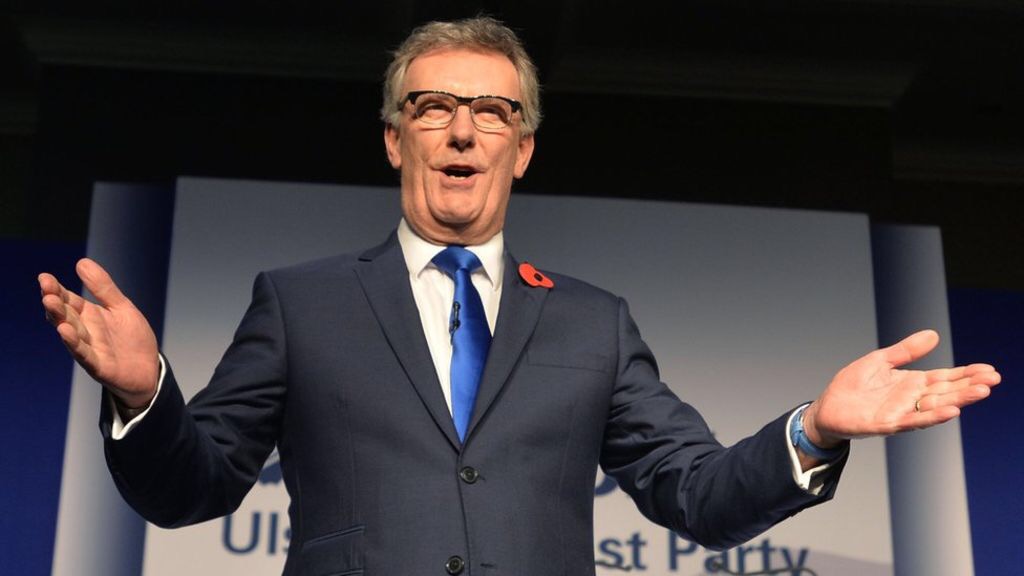 As local politics stumbles incoherently towards Northern Ireland’s centenary, it seems an appropriate time to define unionism for the second century.

A real fresh start, if you like, but unlike the false dawn of the previous DUP / Sinn Féin effort. In fact, the words of the original fresh start document, the Belfast / Good Friday Agreement of 1998, remain a guiding light to unionism for our second century. It is a matter of profound regret that the public discourse on that agreement has not focused on the underpinning values we and the SDLP sought to embed into our politics.

The key paragraph from the Agreement’s opening Declaration of Support is worth revisiting:

‘The tragedies of the past have left a deep and profoundly regrettable legacy of suffering. We must never forget those who have died or been injured, and their families. But we can best honour them through a fresh start, in which we firmly dedicate ourselves to the achievement of reconciliation, tolerance, and mutual trust, and to the protection and vindication of the human rights of all.’

19 years on, I doubt many would conclude we have done well in advancing reconciliation, tolerance or building trust.
In the very last week of the failed 2015-2021 mandate, one of the younger DUP MLAs summed it up in the debating chamber in Parliament Buildings:

”This party, over the last 10 years, has made a huge effort to move Northern Ireland forward in the right direction, even though it is very difficult to do business with a party that we do not want to do business with and, as one of our party members quite rightly said, when sometimes we have to hold our noses to do that business.”

Not only is there no sweet smell of cooperation, the tenth year of DUP / Sinn Féin control has seen the whiff of something unedifying. Incompetence, arrogance and allegations of corruption are not unionist values, nor should they be the values of anyone occupying Stormont Castle, the home of the Northern Ireland Executive.

Unionism must imagine better for Northern Ireland’s second century: a coalition of the willing; parties seeking proper partnerships; leaders who want to share space, power and responsibility because they understand it is for the greater good, not simply because the law says sharing is compulsory.

Imagine a Northern Ireland where the Health Service actually works as intended, with an economy that generates serious wealth for our people, generating the taxes that fund public services that are the envy of others. There is nothing orange or green about making Northern Ireland work, an aspiration I hear articulated by Colum Eastwood as often as I say it myself. Of course, his motivation is different, focused on making us more attractive to a future united Ireland; but that is no inhibition to a collective effort to improve the lot of all our people.

Imagine a single education system, where children mix from age four, receiving a virtual inoculation jab against sectarianism, but which also protects a family’s right to education within a religious context.

Imagine a country that actually heeded the warning of Edward Carson from a hundred years ago about the need for a shared future. Speaking in the House of Commons in 1920, as Northern Ireland was being established, his warning to the politicians who would eventually populate Stormont was clear:

“They must forget faction and section …… If Ulster does what I ask her to do, and what I hope and believe she will do, in setting up an example and a precedent of good government, fair government, honest government, and a government not for sections or factions, but for all, her example may be followed …”

That’s what we must commit to for Northern Ireland’s Second Century: a fair, honest government for all, blind to factions and sections, advancing diversity for what it is, something greater than the sum of the parts.”

In his classic novel The Adventures of Huckleberry Finn, Mark Twain draws a striking metaphor from the dinner table:

“When you got to the table you couldn’t go right to eating, but you had to wait for the widow to tuck her head down and grumble a little over the victuals, though there wasn’t really anything the matter with them. That is, nothing only everything was cooked by itself. In a barrel of odds and ends it is different; things get mixed up, and the juice kind of swaps around, and the things go better.”

Twain was, of course, discussing America’s Deep South at a time when black men and women were not free. You might think our challenges are minor by comparison but the principle remains. Do we truly value sharing? Is it understood that when things get mixed up, they go better?

It’s not about everyone jumping into a virtual blender and emerging the human form of beige. It’s about changing the signs in the pub window from “No sports tops” to “All sports tops welcome”, cherishing and celebrating difference.

It’s about transforming society so people feel prosperous, not only economically but in mind and body.

I yearn for an Executive built on a proper partnership, based on trust, equality and mutual respect. I want to Clean Up Stormont, and have published a Five Point Plan, covering: greater accountability for Ministers and for their Special Advisers; electing a Speaker by secret ballot, as they do in London, Dublin, Cardiff and Edinburgh; giving statutory committees a legal duty to scrutinise the work of Executive departments, not just “assist and advise”; ending the abuse of Petitions of Concern, and; greater transparency in politics, including financial donors.

As a Victims Commissioner, it was immediately clear that while victims and survivors are not a homogeneous group, there were common themes, like the fact there was a reasonable expectation that in the wake of the terrible event that made them victims, the state and its services would form the wagons in a circle and protect them and their families, but too often, the opposite happened.

I sat in the Crowne Plaza Hotel in south Belfast on the 20th of January, as Sir Anthony Hart delivered his report into Historical Institutional Abuse. I was surrounded by victims, some of whom had waited decades for this moment. 41 times – forty-one – Sir Anthony used the word “systemic” or “systematic” in describing the abuse carried out in the institutions he reviewed. Is it any wonder the victims felt vindicated? But they were also left deeply frustrated, because Sir Anthony’s recommendations sit in a report delivered to the Executive Office in Stormont Castle, and that department is effectively closed to those victims. That is the ultimate obscenity of this political crisis – that people whose early years were cruelly and brutally scarred by those in whom the state put its trust, find in their later years justice and redress is, Tantalus-like, just out of reach.

It’s not an experience exclusive to victims. A quarter of a million of our people are on some form of NHS Waiting List; meanwhile, GPs threaten rebellion. In education, the same families see children under achievement at school, generation after generation; meanwhile, issues like post-primary transfer arrangements remain unresolved. And our economy continues to suffer the imbalance of an under-developed private sector; meanwhile our people are less well off than our counterparts in Great Britain.

The Executive’s own Budget document for 2016-2017 makes that clear, using Gross Value Added (GVA), recognised as “a broad measure of living standards”, that if someone in GB has £1 in their back pocket, our people are lucky to have 80p:

Over the last two decades, Northern Ireland’s GVA per head has remained consistently at around 75 to 80 percent of the UK average – peaking at 83.7 percent in 2007.

It is noteworthy that the gap was at its narrowest in 2007, the year the DUP and Sinn Féin took charge of the Executive.

It is time unionism received the leadership that accurately reflects its positive values; time for politics to catch up with the people; time to recognise identity is not binary. My parents were Belfast traders, of Ulster Scots and French Huguenot – so were Henry Joy McCracken’s!

As John Hewitt put it:

‘Firstly, I am an Ulsterman steeped in the traditions of this place. Secondly, I am Irish, of this Ireland. Thirdly, I am British, and finally, in a more diffuse way, I am European. It may make it easier for you to understand if you remove one of those elements but if you do you are no longer describing who I am.’

For this modern world, I would add we should all have a sense of being global, not just European citizens.

Unionism for Northern Ireland’s second century needs to offer better than has been demonstrated over the last decade at Stormont – something offering integrity, something honourable, delivered by people who will put the country’s interests ahead of their party’s, who understand there is such a thing as the common good and the greater good. We must try to inspire and excite, at the same time reassuring them that we care for our community above our own petty self-interest.

Unionism means being united. Our second century must promote greater unity among our people than ever before; uniting education, business, industry, the public services, the Opposition at Stormont, and above all else, uniting the coalition government in united objectives, united principles, united beliefs – a government that is finally fit for purpose!

We will enter Northern Ireland’s second century suffering 21st Century problems, not least our appalling rates of poor mental health and well-being. I have campaigned on this subject for over four years now, and while there is now a broad political consensus it is a massive issue, we have yet to take decisive action. If we do, we achieve a triple win: addressing one of the most toxic legacies of the conflict; helping those trapped unwillingly on benefits; and in helping people become economically active, we rebalance the economy. But above all that, we restore some dignity and purpose to the lives of so many who wake each morning denied a proper sense of purpose in their lives.

Mental health is something we could agree to action immediately, as a first step to dealing with the past. It is cruel to acknowledge the problem but leave it lingering because parties want a “nothing is agreed until everything is agreed” approach. In all humanity, these people need help today.

We may not be able to solve all our great problems in a single act, or mandate, but as the great Russian writer, Ivan Turgenev puts it:

‘If we wait for the moment when everything, absolutely everything is ready, we shall never begin.’

This county needs a new beginning. The Assembly Election is that opportunity, but only if we stop voting Orange and Green and embrace democracy, where the parties of government are judged on performance and those in opposition are told if they are to be given the chance – to do better.