You are at:Home»News & Current Affairs»Opinion»‘Partnership’ is the only way to secure devolution’ – By Colum Eastwood
Social share: 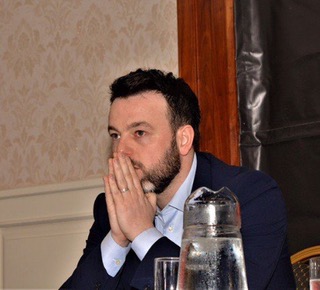 The days before an election usually follow a similar pattern. As the finish line draws ever closer, nerves are frayed, nails are bitten and hyperbole always ends up being the only winner.

This election has been different though. The approach of polling day has actually helped to bring focus and clarity.

The starting challenge of any campaign is to attempt to frame what the election is actually about and what is at stake. The SDLP began with a simple view on the cause and consequences of this election.
March 2nd is about the collapse and failure of the ‘Fresh Start’ government.

The DUP have corrupted the centre of our politics and it is right that the electorate now give their verdict on their arrogance.

Alongside this there is another judgement to be made.

Since beginning to play the senior hurling of government – Sinn Féin have always been second to the breaking ball. They have been consistently out-paced and out-manoeuvred.

If the DUP were the chief culprits behind the catalogue of scandals of Red Sky, Nama and SIF – then Sinn Féin have been standing next to them with their eyes and their mouths firmly shut. The DUP have run rings around them in Government and it has ended up costing us all.

Those judgements will remain on the ballot paper on Thursday. However, it has also become clear there is another stark choice.

As red lines have been drawn and ultimatums issued during the course of the campaign, the DUP and Sinn Féin have made it crystal clear that if their positions are solidly endorsed on March 2nd – there won’t be a return to government in the North any time soon.

That clarity means that there is now much more at stake than one election result – voters deserve this honesty.

If Direct Rule is the result delivered by Arlene and Michelle – it will take a long time to bring back our devolved institutions. We know from history that bringing the institutions down is the easy part – getting them up and running again will be much more difficult.

I know that some might even find themselves apathetic or even tempted by that prospect in order to punish the failings of Stormont- but they should be clear as to what that prospect means in the longer term.

On March 2nd – we can have devolution delivered by partnership or Direct Rule driven a Tory party threatening to impose a hard-Brexit in Ireland.

Therefore, this election is a critical moment for power-sharing.

The SDLP fought with everything we had to bring power back to Irish soil after the long years of violence. Our people, North and South, won that battle in 1998.

As we enter into the final stretch of this campaign – it is that power – it is the very idea of power-sharing in the North which is now at risk.

Devolution belongs to the people – it should not be removed because some parties are not capable of the challenge and the compromise of being in Government.

Therefore, if people believe that power and decisions should be retained on Irish soil – then a new partnership government is the only way to secure it.

If they believe that, at a time of instability and insecurity, the North needs a local voice and a local government that can speak for us – they should turn out and vote for that.

If people still believe that Nationalists and Unionists can share power and work together for the common good – they should turn out and vote for that.

That new partnership government is what the SDLP is offering every voter this Thursday.