You are at:Home»News & Current Affairs»Opinion»‘Nothing about us without us’ – By John Kyle
Social share: 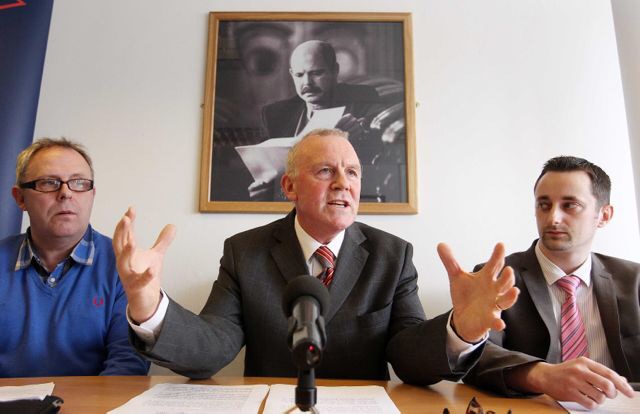 On 17th September 1997 David Trimble, flanked by David Ervine and Billy Hutchinson, returned to the George Mitchell talks in the full glare of the world’s media thus rescuing talks which were teetering precariously on the brink of collapse.

This was not the only important contribution that Loyalist parties made to the negotiations which resulted in the Good Friday Agreement.

The Loyalist ceasefires helped create the circumstances in which political negotiation could take place. The involvement of the PUP and UDP robustly representing Loyalist concerns, demands and aspirations ensured that an agreement was reached which was acceptable to all and which created the social and political architecture for a peaceful and democratic Northern Ireland.

It would not have been possible had not every section of the community been represented and assured that their voice had been heard in the negotiations.

We now are on the eve of an election which is, in effect, an election to another negotiation. While the achievements of the Good Friday and

St Andrews Agreements have been substantial in moving us away from violent conflict towards a multiparty democracy, the vessel has run aground and needs refloated.

One of the acknowledged weaknesses of our governing system over the past decade has been the perception among Loyalist communities: their voice has not been heard in Stormont; their interests have been overlooked and their concerns have been treated dismissively by the political establishment.

We could argue whether this perception is justified or not but it is widespread nevertheless. Issues which cause angst within working class communities such as educational underachievement, welfare reform and austerity measures, housing stress and lack of social housing particularly for family members within the local area, mental health issues, addiction and suicide prevention never seem to be priority issues for politicians from the main Unionist parties – the notable exception being Mike Nesbitt’s championing of mental health issues.

I cannot recall hearing a single Unionist politician rail against the crude, blunt instrument used to re-evaluate benefit entitlement, despite the fact that the assessment tool used has been shown to be woefully inadequate.

Even when we have a Unionist Education Minister, to the dismay of many, his first priority seems to be the perpetuation of academic selection and the defence of grammar schools rather than the plight of those who are not ‘selected’.

Successful communities are created when every citizen feels valued and is able to make his or her contribution. A sense of pride and ownership is engendered. A creative synergy occurs resulting in a sense of belonging.

This should be the goal of the next round of negotiations, not narrow self interest or victory over ‘the other side’.

Furthermore in any important negotiation if all the key stakeholders are not at the table how can they be expected to agree with the decisions made?

If people are excluded they cannot offer their ideas to create solutions and may not take ownership of the outcome.

The legacy of our past is one of the outstanding challenges facing the next cohort of MLAs.

We have procrastinated long enough to the detriment of victims and survivors. An inclusive process is essential and Loyalism, which to date has been largely excluded from the process, is willing and ready to participate.

Throughout the past three decades smaller political parties such as the Women’s Coalition have made invaluable contributions to our peace and political processes. The tribal rhetoric of the two largest parties should not frighten voters from voting for smaller parties.

David Ervine, who is still revered ten years after his untimely death, is proof that small parties like the PUP and indeed individual politicians can make a lasting difference to our imperfect political system.

Social share:
ae17
Previous Article‘Time for the next ‘impossible’ conversations’ – By Brian Rowan
Next Article “It’s lovely to meet you.” I replied “I love you.” – By Clare Bailey