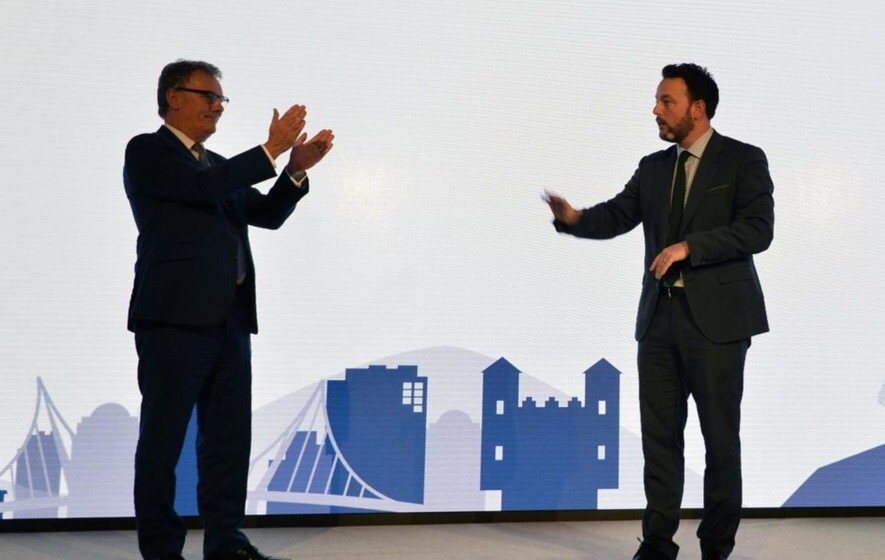 This week, the DUP are playing the same Project Fear card they played last May, and in every Election they have ever fought.

Since they entered government 10 years ago, they say never mind their record of delivery, think of this – the DUP have identified people called “themuns” and plead the need to keep DUP feet on their necks. It’s the same old, same old offer.

When I was CEO of a small business a good few years ago, I was struck by a quote from the great business guru, Charles Handy, who summed up the need to break away from doing the same old thing and embrace change. He made reference to a particular type of frog. He said:

… a frog if put in cold water will not bestir itself if that water is heated up slowly and gradually and will in the end let itself be killed, boiled alive, too comfortable with continuity to realize that continuous change at some point may become intolerable and demand a change in behaviour.”

On the cusp of this Election, I am even more convinced that partnership is the only credible, positive way forward. People sometimes ask me to define the difference between the Ulster Unionists and the DUP. One answer (of many) is that we want to be willing partners within a government led by two parties representing the two halves of our traditional divide; as opposed to parties that share because the law demands it, as the DUP and Sinn Féin did for the last decade.

Tell me this! Why did devolution stop at Stormont? All the evidence I have seen says you make real, positive change in people’s lives the closer you get power and a sense of empowerment to the domestic unit. So, for example, why did the last DUP / Sinn Féin Executive keep Regeneration powers at Stormont when they were promised to our local councils?

It seems clear to me the conflict inevitably led to the dominance of two big political blocks, both scarily similar in their Command & Control structures. Power for power’s sake is dangerous; as the great Irish philosopher and politician Edmund Burke put it:

The greater the power, the more dangerous the abuse.”

The abuses of political power over the last ten years must surely direct people to vote for a sea-change in the way this country is managed.

A few weeks ago, I wrote an article called ‘Partnership, or Domination’ for Eamonn.

I reflect I mean more than one big party trying to dominate the other. The more I hear about the modus operandi of DUP/SF, I fear how they appear to collude to dominate the poor people of this country.

Since writing “Partnership not Domination”, I am reminded of one of the many quotes of the great former First Lady of the USA, Eleanor Roosevelt:

I would rather be damned for obeying the Ulster Unionist credo: Country First; Party Second; Individual Third; but I also acknowledge how challenging that order of business is in an Election!

To make Northern Ireland even more secure within the United Kingdom, the political imperative is to make the maximum number of people happy. Remember the American Declaration of Independence?

We hold these truths to be self-evident, that all men are created equal, that they are endowed by their Creator with certain unalienable Rights, that among these are Life, Liberty and the pursuit of Happiness.”

Nearly 250 years later, the delivery of happiness does it for me as an aspiring First Minister.

If I were given the opportunity to lead the next Executive, I would encourage my partner(s) to concentrate on some areas where delivery is required:

If we make significant progress on all those fronts over a five year mandate, I am sure we could finish by identifying some areas of disagreement!

A few hours from an Assembly Election that may define our collective future for a generation,

I am not unhappy in pointing you to the recent past, only because in a proper democracy, you vote on the record of government. If that is not up to scratch, you look to the Opposition.

For the first time since 1998 there is such a thing as an Official Opposition to which to look.

For the first time in the 96 year history of Northern Ireland, voting for the Official Opposition offers the realistic opportunity of change.

As Shakespeare put it, in Julius Caesar:

There is a tide in the affairs of men.

Which, taken at the flood, leads on to fortune;

Omitted, all the voyage of their life

Is bound in shallows and in miseries.

On such a full sea are we now afloat,

And we must take the current when it serves,

Or lose our ventures.’

Politicians are not wealth generators; quite the opposite, we draw our salaries, expenses and office costs from the public purse.

What we can do to create the best environment in which you, the wealth generators, grow our economy, employ more people and yield the taxes that fund excellence in our public services?

So, on the Ulster Unionist watch, we would listen harder and react better to what you have to say.

I remain extremely concerned by the lack of a plan for Northern Ireland post-Brexit.

We committed initial thoughts to our Vision paper in September (www.uup.org) which has a three-stranded approach (i) a vision for NI outside the EU (ii) the plan and (iii) ten key asks.

We need to identify our policy priorities and, crucially, determine whether they clash or complement the UK Government’s. There will be clashes and we need the communication channels to red flag our concerns.

Our key ask is a tripling of investment in Infrastructure, paid for by the billions we are told will be repatriated from Brussels, and above all, a recognition that we lack any coherent energy policy, to the point the lights could start going out by 2020, not least for FSB members.

We also prioritise a step change in education and skills – again listening more closely to your needs.

We are investing in expert research into developing our own energy policy and also business rates; there is little point trying to gather business rates from a company that has closed over its inability to pay rates.

Other issues we hear you say need tackled include: broadband provision; red tape; timely payments, especially by the public sector.

The Ulster Unionist Party were the first to promote the devolution of Corporation Tax rates. We still support it, but acknowledge the advantage has eroded over time.

In short, we are not afraid to devolve power from the hill at Stormont and further empower you to do your job, of wealth generation.

Social share:
ae17 Mike Nesbitt SDLP Stormont UUP
Previous Article‘Partnership’ is the only way to secure devolution’ – By Colum Eastwood
Next Article ‘Questions for the Opposition’ – By Colm Dore