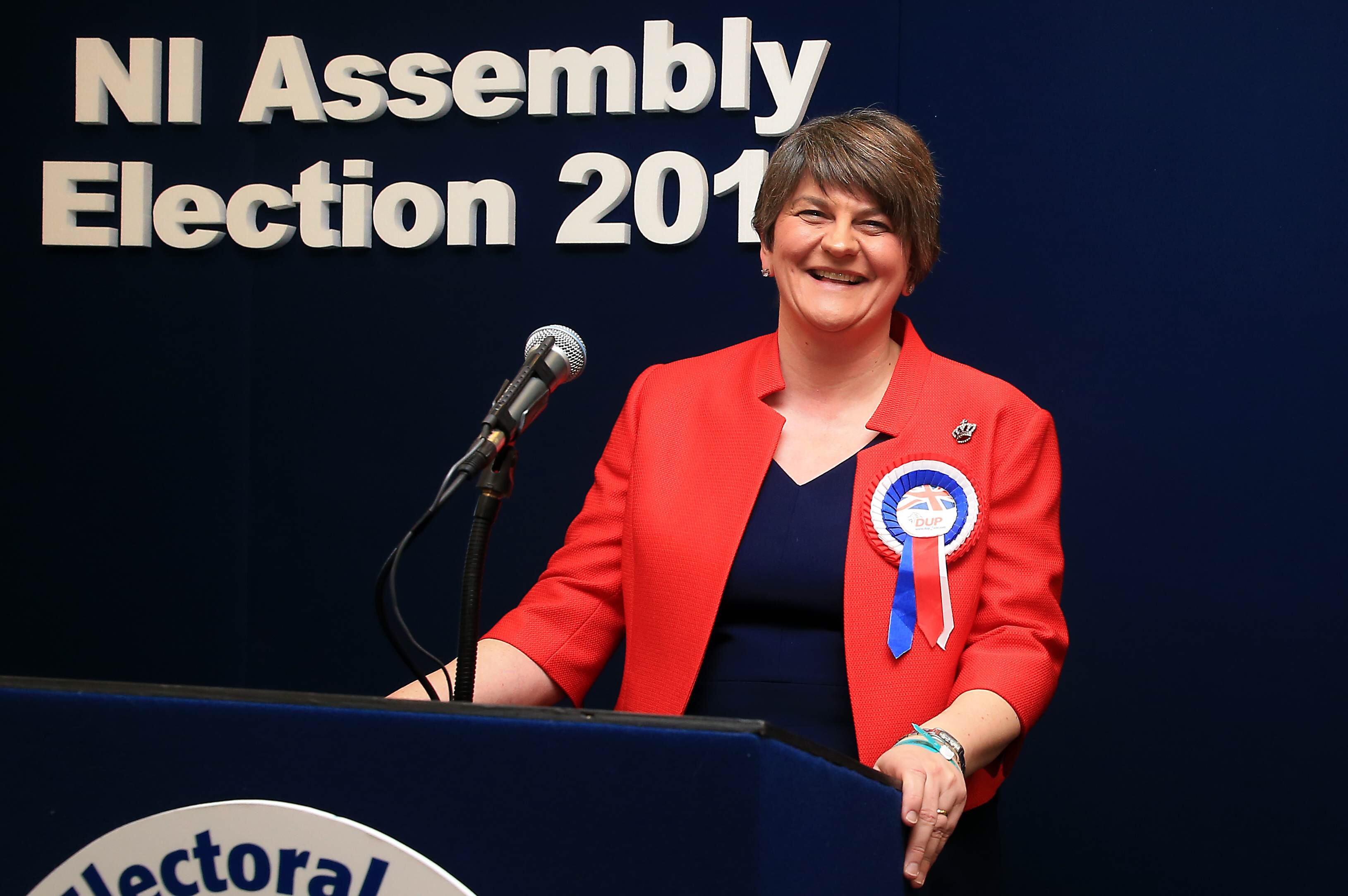 I doubt if many people track US president Donald Trump and DUP leader Arlene Foster more assiduously than I do.

The two leaders have many traits in common: self-righteousness, absolutism and both appear to lack humility.

The reality is, the County Fermanagh solicitor and DUP leader has not fired a pea shooter in her life not to talk about a bullet and yet, the signal she emits has resulted in an incessant odium being heaped upon her right across the political spectrum.

Let me state – I have no animus towards Arlene Foster and any professional interaction I have had with her has been civilised. The fact is however – I am irrelevant.
Journalists, as in the case of Donald Trump, afford Arlene Foster no quarter.

Rival party leaders collectively and metaphorically spend their time gun toting around her as witnessed in the UTV leaders’ debate last Thursday night.

Mrs Foster’s appearance on ‘The View’ with Mark Carruthers in the chair, also last Thursday night, made for uncomfortable viewing as she squirmed in the face of questions on a wide range of issues.

A friend watching the incessant volley of questions fired at the DUP leader who spent much of the interview ducking and diving trying to escape Carruthers’s fusillade exclaimed, “I feel sorry for her.”

The judgement of commentators Newton Emerson and Deirdre Heenan left nothing remaining to be said. This was a car crash.
Arlene Foster’s performance set my mind a thinking of the words of ‘The Gambler’ sung by Kenny Rogers:

That the secret to survivin’

Is knowin’ what to throw away

And knowin’ what to keep

‘Cause every hand’s a winner

And every hand’s a loser.”

A little bit of humility from the DUP leader might have retrieved the evening for her.

Had she the presence of mind to say that perhaps comparing Sinn Féin to a ‘crocodile’ was “injudicious” many people might have said “fair enough.”

One can only conclude Mrs Foster considers this is the ‘terra firma’ which she needs to occupy if she wants to survive and mobilise the Unionist vote.

Her strategy and the advice she is receiving seem to lead to one conclusion – ‘hobbling republicanism’ is the ticket to guaranteeing not just an electoral win but remaining the biggest party.

The fact is a botched energy scheme overseen by DUP ministers exposed the community to the possibility of picking up the tab for millions.

This hasn’t given Arlene Foster cause to blush once in public. That says a lot.

She has chosen to play on what stirs Unionist emotions – fears of ‘assimilation’ into a united Ireland: talking about a border poll, and portraying Sinn Féin President Gerry Adams as a monster.

Into this anti Adams potion of ‘eggs and marrowbone’

the DUP leader is tossing the following ingredients:

“No” to same sex marriage;

“No” to funding of controversial inquests (many of which would have members of the security services at their heart);

“No” to recommendations on the table about legacy issues;

“No” to a resurrection of the originally agreed Peter Robinson Maze Prison site plan;

“No” to an Irish Language Act for which she has not a clue about cost.

When asked a direct question on ‘The View’ about the amount of money involved for an Irish Language Act (a key plank of the DUP’s policy) Mrs Foster literally floundered.

The question is this? Will using Gerry Adams as the ‘bogeyman’ work again for Arlene?

A DUP insider said “there are no votes for the DUP in wishy washy liberalism.”

The lessons for pollsters and the Media which flowed from the election of Donald Trump as President of the US, from the Brexit referendum in the U.K. and even from the Conservative Party’s own private predictions in the last General Election cannot be ignored.

Allowing for all this, even the smart ones in the DUP must be asking themselves some questions about their leader’s performance, utterances and judgement.

Comparing Sinn Féin to a ‘crocodile’ was jaw-dropping and a gift for satirists and cartoonists who had a field day portraying the DUP leader as ‘vicious.’

Surely no self respecting party leader wants to be depicted as a figure of fun?

When Mark Carruthers pressed Mrs Foster about the wisdom of using such a simile as ‘crocodile’ to describe Sinn Féin she ‘sneered’ – a facial expression which prompted the interviewer to ask – “Why do you find that funny?”

In bluntly refusing to be accountable or responsible for any aspects of the Renewable Heating Incentive scheme débâcle, and choosing to ‘dump’ in the words of former Northern Ireland Secretary of Sate, Peter Hain, on her senior civil servants, Arlene Foster miscalculated and exposed a weakness.

Taking refuge in claims of misogyny was deemed risible:

Mrs Foster’s ongoing claim “I am the leader of Northern Ireland” against the backdrop of the Brexit outcome when the majority here voted to stay in Europe strikes a discordant note in the catholic nationalist community. That community takes the principle of ‘parity of esteem’ very seriously.
The office of First and deputy First Minister is co-equal. Arlene Foster seems to have driven a coach and horses through this incontrovertible fact. Does that matter to her electorate?

“We will hold our noses and do business with you,”

prove damaging to Arlene Foster and the DUP..?

Does the fact that the post Paisley Democratic Unionist Party ends up perceived to be contaminated through alleged contact with big business matter?

How damaged will the DUP be at the polls having replaced Sinn Fein as ‘the nasty party’ despite the fact that the Democratic Unionist Party was not the political wing historically of a paramilitary organisation?

Prevailing pluses for Arlene Foster: an attitude which argues:

“She’s one of our own. We are not happy about RHI and some other things but we will not allow them to drive her out.”

“She’s a tough woman and she is standing up to them.”

DUP types who might have been more than annoyed and possibly a bit ashamed about the RHI scandal are puzzled at Ulster Unionist Party leader Mike Nesbitt’s declaration that he will transfer to a pro United Ireland party candidate in East Belfast.

This will probably further consolidate the DUP vote.

On the other hand there is the possibility that the Ulster Unionist voter unhappy with Mike Nesbitt’s pro SDLP stance will not vote at all. That is a worry for the DUP.
There is grave concern in some Ulster Unionist quarters Mr Nesbitt in going public about transferring to the SDLP in his own constituency could cost that party three/four seats across Northern Ireland.

Time to put my hands up: I can’t read what the Trumps and the Fosters of this world are about:

So with the clock counting down to the Assembly election what are DUP insiders and political rivals saying?

One bright boy in the DUP declared “a win is a win’ meaning as long as the DUP emerges as the biggest party with 30 seats then the ‘Petition of Concern’ and the office of FM etc are secure.

Another insider is more pessimistic predicting the DUP could end up with considerably less than thirty seats. It would be “Good night Arlene” at that point.
Another seasoned DUP campaigner is predicting delivery of thirty two seats even allowing for the possibility of losing a Minister, possibly Peter Weir or Simon Hamilton in Strangford.

The ‘leafy suburbs’ are of grave concern to the DUP. That party is having trouble reading the minds of those constituents. The RHI scandal is hurting among those people.

The possibility of Robin Newton losing his seat in East Belfast has been raised in conversation.

The fallout from that could prove interesting in the short term since Mr Newton is still The Speaker.

Were he to lose his seat, conceivably I am told, South Down DUP candidate Jim Wells – ‘The Father of the House’ could end up in the chair in the interim.

The bridesmaid would have eventually ended up the bride!
To say this is a very tribal society is an under statement:

I wouldn’t rule out the possibility of Arlene Foster on March 2, bringing home the bacon – all thirty two slices: In golfing terms that is called ‘Par.’ In political terms that will be called ‘Parlene.”

As in Dolly Parton’s song Jolene, a lot of DUP MLAs and Ministers will be humming these words in the coming days:

“Arlene – my happiness depends on you.”

Social share:
ae17 Arlene Foster
Previous Article‘Our politics is the politics of the cudgels’ – By Brian John Spencer
Next Article Naomi Long’s dream – “A Community of Many Voices but One Vision”