You are at:Home»News & Current Affairs»Opinion»“Arlene Foster wouldn’t step aside, so we did it for her. She will stay stepped aside” until… – By Michelle O’Neill
Social share: 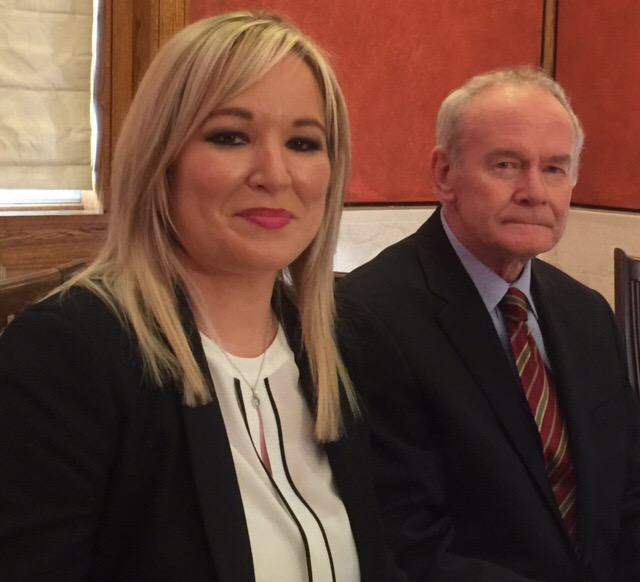 The election on March 2nd has the potential to be a defining moment in the peace and political process.

Over the past ten years, despite the valiant efforts of Martin McGuinness, the potential of our peace has been slowly and deliberately fractured by the DUP.

They refused to embrace any meaningful process of reconciliation, repeatedly spurning the many positive initiatives, which Martin McGuinness took in order to reach out the hand of friendship to our unionist neighbours.

Rather than embracing diversity and parity of esteem, they chose to mock and pillory the Irish language and identity and our neighbours of different ethnic background.

They have blocked marriage equality and repeatedly descended into racist, sexist and homophobic attitudes and actions.

They refuse to respect the cross-community majority in the North who voted to remain within the EU and continue to pursue a reckless and right-wing, anti-immigrant agenda that will have devastating political, economic and social consequences for our entire island.

And then we have the repeated financial scandals and allegations of political corruption, from Red Sky to Nama and, of course, the RHI cash for ash.

Even in the face of an outraged public, furious at the potential loss of £500 million, the DUP still could not bring themselves to do the right thing and have treated the electorate with contempt.

While others were calling for Arlene Foster’s head, Martin McGuinness privately called on her to stand aside in order to facilitate an independent investigation and establish the truth in order to try and restore public confidence in the institutions.

Even that proved too much for DUP arrogance to swallow.

Far from doing the right thing, Arlene Foster continued to refuse to accept any responsibility for the mess she created as a Government Minister.

Rather than humility we had more hubris.

Rather than respect, we had more crude and blunt sectarianism from her fellow DUP Minister Paul Givan who scrapped a bursary helping disadvantaged children to attend Gaeltacht language courses.

The posts of First Minister and deputy First Minister are co-equal and interdependent. That is the context in which Martin McGuinness acted. Arlene Foster wouldn’t step aside, so we did it for her.

She will stay stepped aside until such times as the DUP accept that the only way we will allow their return to government is on the basis of genuine power-sharing based on equality.

There must be integrity in government and respect for the citizens we serve.

We will accept nothing less.

So where do we go from here?

There are those who want to sectarianise this election, to circle the wagons and tilt at windmills and bogeymen. They cannot have their way.

This election is about the future. It is about the type of society in which we want to live and about how we want the political institutions to work.

We are also seeking the strongest possible mandate to enter into the negotiations, which will follow the election.
These talks will be make or break for our political process. I want a political breakthrough.

We have a limited opportunity here to fix what is broken and to get our political system back on track, towards genuine bridge-building, equality, reconciliation and prosperity. A limited time to progress the process that will resolve the legacy of the conflict.

The people want action. They want institutions which work and deliver for everyone not just for some.

They want an Executive and Assembly that delivers, that treats citizens decently – that works for all in the community. Nationalist and Unionist, women, ethnic communities, victims of the conflict, LGB&T communities all deserve respect and equality.

There is no advantage for our society in denying anyone their rights to live and prosper and enjoy a good quality of life.

They want institutions that make a difference in people’s lives, including a transformed health service where patient care comes firstly, with quality education and more jobs.

They want Institutions that deliver for our young and old, and which close the gap between those who are well off and those on low incomes -dependent on tax credits to help them make ends meet.

The people want the Irish and British governments who have taken a hands-off attitude to nurturing our peace, to now live up to their responsibilities, honour their agreements and respect the democratic wishes of the peole. It is time for them to deliver.

The best way to achieve that is by returning the strongest possible Sinn Féin team in this election, because we have shown time and again that we will put the interests of all citizens firstly and stand up for integrity, equality and respect.
What we win in these negotiations, we win for all.

We are determined to get things back on track and to create a genuinely progressive power-sharing coalition where we work with one another and together for the future in the best interests of everyone in this society.

That is what I am determined to achieve as the leader of Sinn Féin entering into these negotiations.

That is what I am asking the public to endorse when they go to the polls on March 2nd.

Together we can seize this opportunity and with your support get the job done.

Social share:
ae17 Michelle O'Neill Sinn Fein
Previous Article“Victims are paying the price of the peace that the rest of us enjoy” – a Colin Davidson sentiment shared by Peter Osborne
Next Article ‘The SDLP is asking voters to vote for change and we are also asking them to transfer for change’ – Colum Eastwood