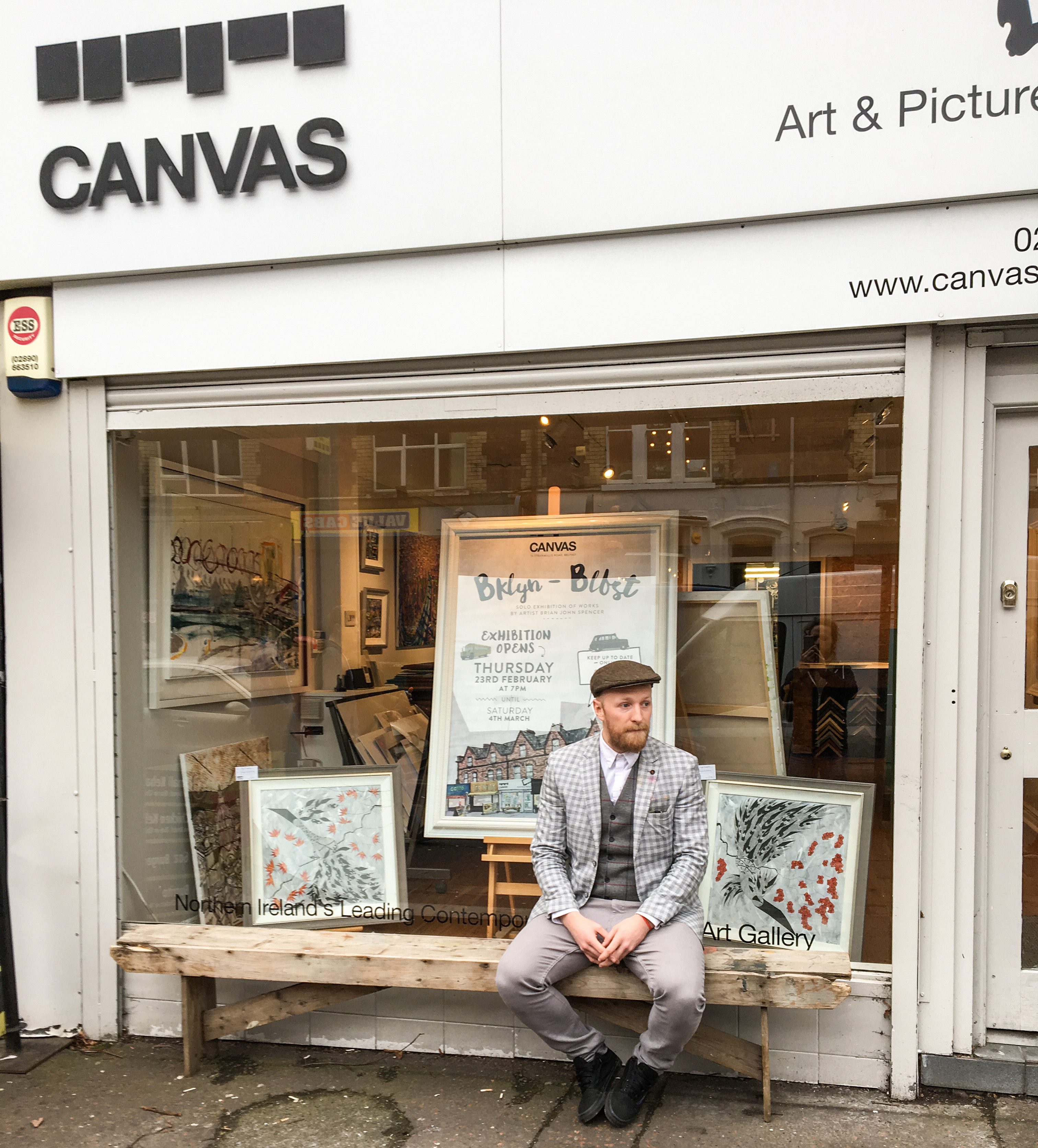 He attended RBAI – read Law at Queen’s University, turned his back on all of this, took up a paint brush and a pen and opted for life in the raw in the streets of Belfast and Brooklyn New York.

A new exhibition of his paintings marks this journey, ‘BKLYN-BLFST – Breaking Brooklyn and Belfast’.

Anchored to the banks of The River Hudson he melted into a way of life foreign to him.

On returning to Northern Ireland in October 2011 he swapped his office job, in pursuit of a living yielded up from the streets and coffee shops of his beloved Belfast.

Emboldened by the carefree, anything goes, defiance of the youth of Brooklyn, Brian kissed goodbye to comfort and conformity yoking many of his Belfast contemporaries in the offices of solicitors and accountants.

Espousing the Brooklyn way Brian took to Parisian style flaneuring, imagining the real and unreal in word and tint in the manner of many creative spirits before him.

Brian was determined to forge a life as a man of his city and a maker of things.

The odyssey of self discovery, through photography, videoing and painting into which Brian stumbled in October 2011 has become addictive and incurable.

This lust for life and discovery will shortly draw Brian into to the four corners of Ireland as he goes in search of the soul of an island people whose oral tradition lit up the literature and music halls of the world… people such as Liam Clancy, Joyce, Beckett, Wilde etc. (Follow the Ireland in 32 days project here.)

Exactly five years after returning to Belfast from New York Brian was invited to the United States again, travelling for 10 days in October 2016 with a Stormont delegation through Washington, Arkansas and Columbus. This was Brian’s return ticket to the Big Apple.

Two months in Brooklyn living on his wits were turbulent, the trial and adversity were great, but in the end the adventure was a great success. 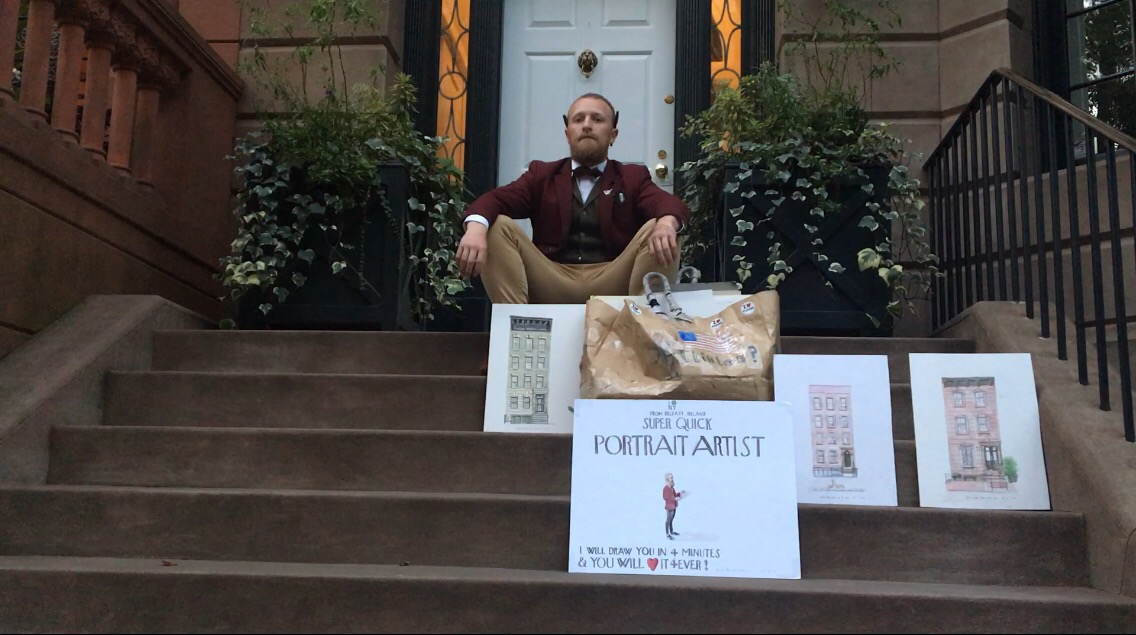 Brian drew in the Dead Rabbit and many Irish bars across Brooklyn and Manhattan, drew at the farmers’ markets at Union Square and Prospect Park, drew at the American-Irish Historical Society opposite MOMA, the Waldorf Astoria and at the Irish Consulate on Park Avenue. 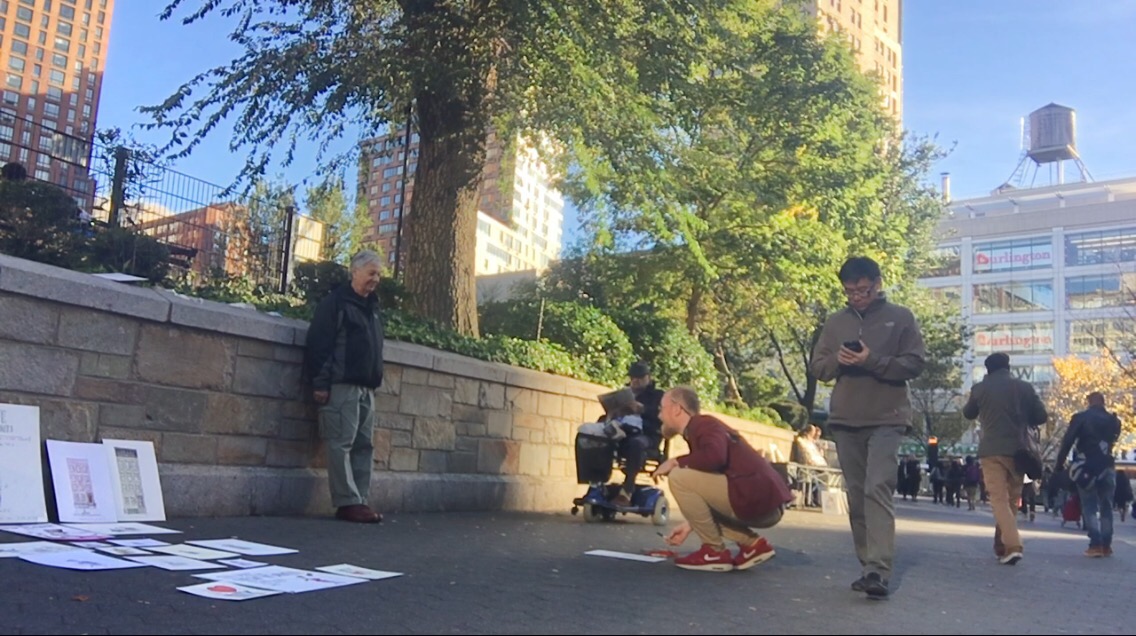 Brian was consciously following in the footsteps of the great artists who came to the city before him, like the Chinese dissident artist Ai Weiwei, as Corey Kilgannon explained in the New York Times:

“Mr. Ai himself worked there (by Fifth Avenue and 59th Street) as a street artist during the dozen or so years he spent as a young artist in the United States before returning to China in 1993…

Mr. Ai was one of many young Chinese artists trained at top art schools in China who came to New York in the early 1980s for artistic freedom, as well as the chance for fame and fortune. Many resorted to earning a few easy dollars by using their charcoal-sketch training to become street portraitists, rendering in minutes a caricature of a customer, who would buy it for as little as $5.”

The more Brian interacted and networked and shared business cards the more doors opened, the commissions flooded in, drawing people, families and the buildings of Brooklyn. 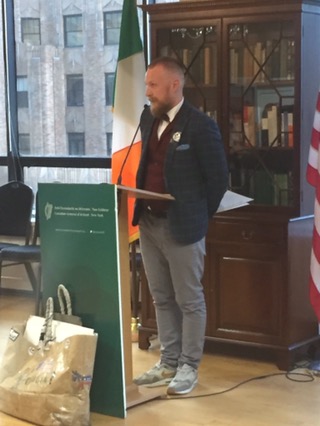 Anchored Back in Belfast Brian is continuing to make and create charged with his Brooklyn mojo, still taking orders and shipping work back to the the US.

Brian plans to return in May 2017 for a few months to augment his US experiences.

He is delighted to team up with Canvas Galleries in the Stranmillis area of Belfast to exhibit the fruits of his labours in Belfast and Brooklyn, two cities, that inspired him and others before him.

Mixed in with the art is text which captures Brian’s time in his two favourite cities.

This is a lesson in ambition, adventure, achievement and change – the story of Brooklyn, a city where people go to make it, and of Belfast, where one of its sons has demonstrated there is merit in being a Brooklyn burglar.

See all Brian’s videos and vlogs about his time in Brooklyn and Manhattan here and below. 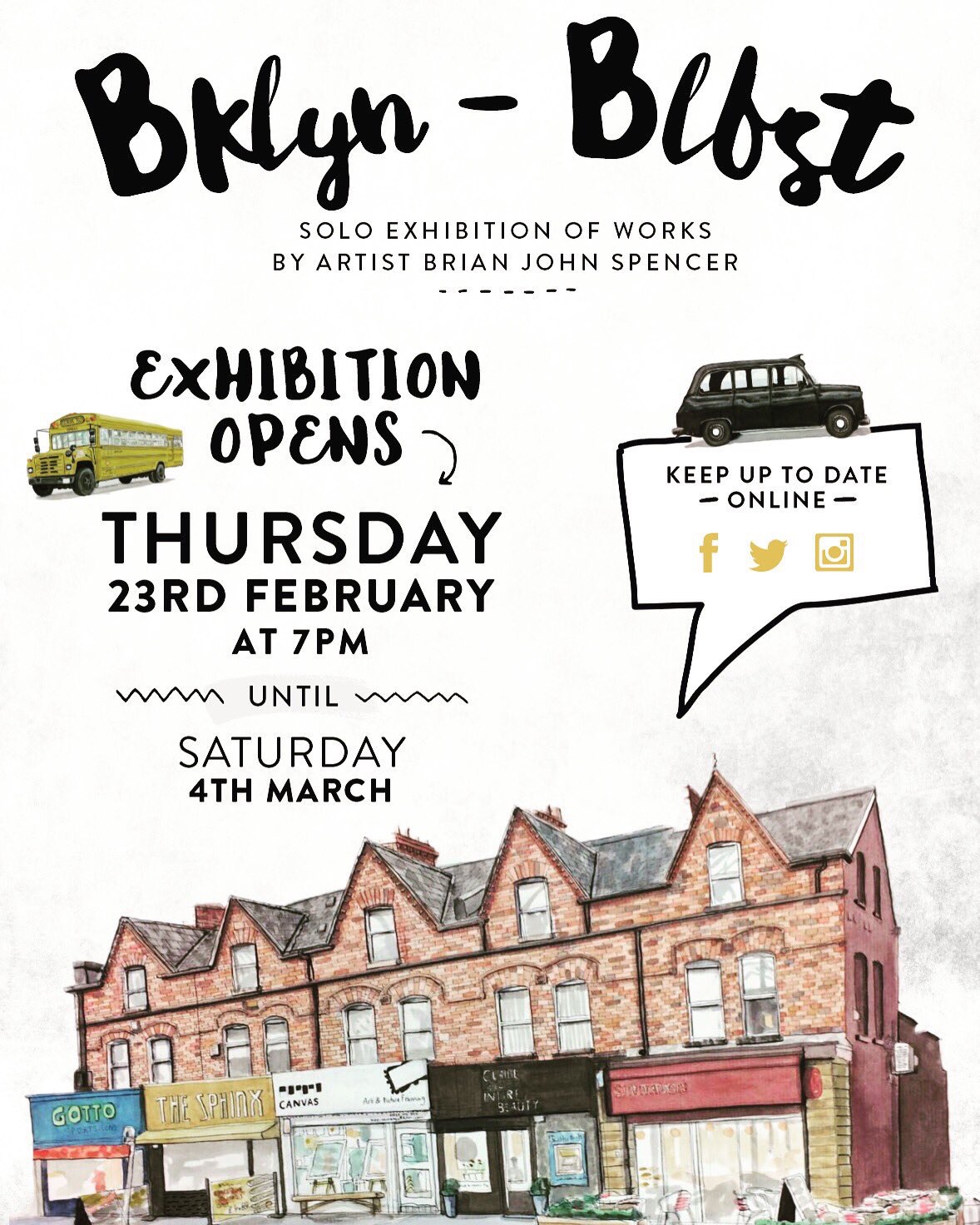