You are at:Home»News & Current Affairs»Opinion»‘The DUP and Sinn Fein can save face in the current RHI crisis and work together’ argues Jamie Bryson
Social share: 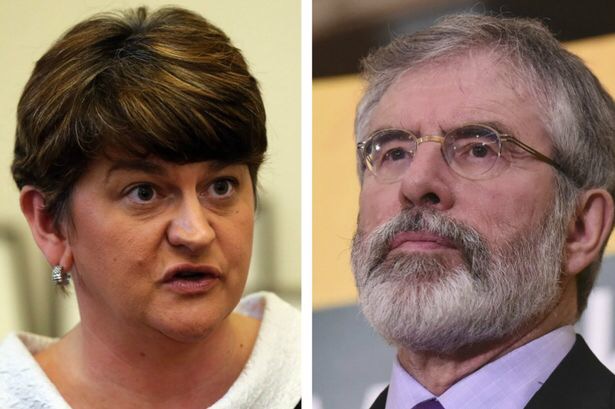 The scandal over the RHI crisis is yet again signalling Stormont’s institutions are on the verge of collapse.
Sinn Fein are packaging all their post ’98 ‘process’ grievances into a gradually developing narrative which centres on the DUP’s commitment to power sharing per se.
As a staunch critic of the architecture of the Belfast Agreement, I would argue that this developing narrative was always inevitable, given the fault-line that underpins our system of Government, namely mandatory coalition.
Mandatory coalition can be summed up in a paragraph; It is designed to bend democracy in order to accommodate division and allow such division to co-exist within the framework of a political system.
The problem, outlined in the paragraph above, is that mandatory coalition allows division to co-exist. It doesn’t deal with the problem. It creates a vacuum in which it can have just the right amount of oxygen to breathe.
So now that we have summed up mandatory coalition in a paragraph, let us also take a paragraph to try and sum up the effect of same.
It gives the fundamental message that the two major traditions in Northern Ireland cannot trust each other to govern.
Therein lies the problem. Mandatory coalition will always lead to mis-trust and gridlock, because it is, of itself, a safety lock, a safety lock against a true system of democracy, such as a voluntary coalition or majority rule.
My criticism of the DUP centres on their acceptance of such a system, but upon more than this – the pretence that their participation in such a system of Government doesn’t wed them to their partners, Sinn Fein.
We have seen the electoral message of the DUP reduced to ashes (pardon the pun) as Sinn Fein have humiliated the DUP and shown that they cannot even speak in the chamber without Republican permission and on Saturday came the greatest humiliation of all for the DUP.
Gerry Adams stood in the Felons Club and mocked the joint-First Minister. She can only remain in power so long as Sinn Fein allow her. The DUP, by their acceptance of the iniquitous architecture of the Belfast Agreement, have sown the wind, and now they are reaping the whirlwind.
The system, I suspect, will still be resurrected. Sinn Fein need the systems functioning because it is precisely the architecture of the Belfast Agreement that provides them with their only pathway towards their goal of Irish Unity. The DUP want the systems functioning because they lust for power, and the trappings of such.
There is a clear path out of this mess for Sinn Fein and the DUP. Martin McGuinness could resign, leaving Arlene Foster to run effectively a zombie Government.
This would give 6 weeks breathing space before the Secretary of State would have to step in and either dissolve the Assembly or schedule fresh elections.
Inside the 6 weeks the DUP and Sinn Fein could settle on mutually agreeable terms of reference for an investigation into the RHI scandal. The basis for such an agreement is already there.
Alongside this, an election could be stalled by agreement to enter into negotiations in which Sinn Fein will package all their post ’98 grievances.
The DUP will be able to tell their electorate that Arlene Foster stood firmly. They will also escape the scrutiny of a full public inquiry under the Inquiries Act 2005.
Sinn Fein will tell their electorate that they followed through on their threats and that the DUP agreed to their terms of reference. They will also get the chance to use fresh negotiations to pocket more concessions.
The above scenario allows both of the partners to save face, and an avenue out of a mess largely of their own creation.
Such a sticking plaster will only work for so long. Eventually the perpetual cycle of crisis, spawned by the unworkable system of mandatory coalition, will have to be addressed. That is where real peace and stability will be found.

Social share:
RHI
Previous Article‘POLITICS in the TRENCHES – Adams speech not a hint, more an ultimatum’ – Writes Brian Rowan
Next Article ‘A Green v Orange War that neither side can win’ by Eamonn Mallie