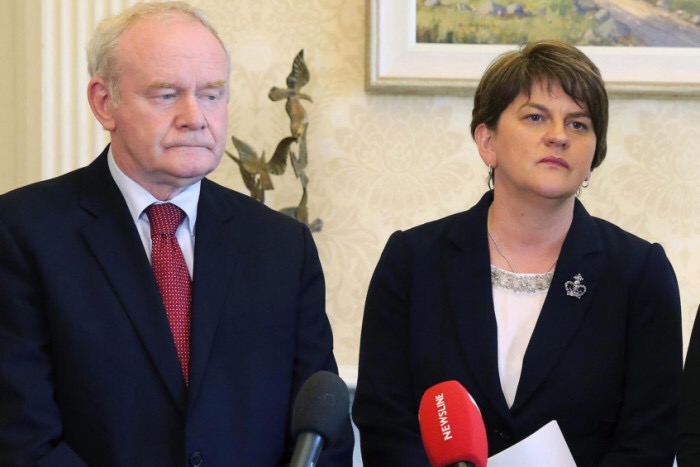 Some RHI Stormont crisis analysis pessimistically cites the fact that the two main parties don’t share the same constitutional aims, and don’t agree on the name of the place.

This can feed false equivalences. Reductive discourse, which says both sides are as bad as each other, can provide political cover for those who are less interested in making partnership work.
That’s the premise and promise of the Good Friday Agreement: partnership.

Martin McGuinness believes that the institutions can lead to Irish unity. Ian Paisley and Peter Robinson believed that they could secure the Union.

Commitment to GFA principles enabled these diametrically opposed constitutional aims to result in constructive politics: a partnership, however imperfect.
The leadership of Martin McGuinness, in terms of constructive engagement with the other community, is evident in deed and tone. Tone is no mere matter of presentation, but a matter of substance in a deeply divided post-conflict society, as it is in any fractured relationship which requires healing.

Delivering the Carson lecture on Irish Unionism in Iveagh House in 2012, Robinson sought to fill the sails of Unionism with expansive values leading to a pro-Union consensus, inclusive of people of a non-Unionist background. Robinson presented this as a political imperative for Unionism. It could be called enlightened self-interest. A reductive, but still useful, way of putting it might be ‘killing nationalism with kindness’.

No less irascible than his successor, Robinson dismissed colleagues who didn’t get it as ‘having the strategic vision of lemmings’.

That’s why he was ‘the last man standing’ on the Maze project. It’s the reason he was prepared to use up his last remaining political capital to immediately end ‘hokey cokey’ ministerial resignations when confronted with the external challenge represented by a MI5 report on paramilitaries in Autumn 2015.

In Iveagh House, Robinson addressed the Decade of Centenaries: “It is a sign of real progress that unionists and nationalists can consider the events of a century ago, in a spirit of respect, reconciliation, and understanding of our shared history.”

Yet pronouncements on the 1916 Easter centenary from Arlene Foster, First Minister for all the people, were closer to Jim Allister’s talk of “some foreign old grubby rebellion”.

Magnanimity is often difficult for the modern leadership of historically dominant groups, and the DUP has habitually channelled Craig more than Carson, but it got unnecessarily, belligerently, drunk on the idea of Arthurian Arlene.

It spurned SF attempts to steer it toward safety, prompting SF to call a halt. Was SF dithering on the terms of a RHI investigation influenced by its long-term commitment to keep the Executive from crashing? It fed into long-standing frustration among SF supporters about reaching out to the DUP without reciprocation.
Seasoned observers have been surprised at the uncoordinated DUP response. Jeffrey Donaldson says the DUP deeply regrets losing a precious power-sharing partnership. This is immediately contradicted by Simon Hamilton’s boast that “we ran rings round SF in government”. Does that sound like valued partnership?

Gregory Campbell tells an interviewer that “digging works both ways”, before adding “I have campaigned for parity of esteem for years if not decades.” Everyone puts their best foot forward on their CV, but that is more analogous to attending a work-review before sobering up.

Perhaps political intoxication explains such frequent declarations of strength, which indicate an impaired understanding of strength, relating it only to might.

Celebrating one of his leader’s imperious pronouncements, a DUP councillor tweeted that she ‘will not step aside ‘for a single day’’, alongside emoticons (cartoon images) of flexed muscles.
Unseemly DUP jibes about consequences arising from the health of Martin McGuinness suggest a similarly one-dimensional understanding of strength, not least in Irish political history. Perhaps a fuller appreciation of the ‘Decade of Centenaries’ might increase appreciation of thematic strengths like dignity, patience, generosity, endurance.

A rather different tweet said Martin McGuinness left his sick bed to address arrogance, so the least people can do is call at a polling station.

SF has widened discussion of the RHI debacle to other issues affected by the DUP approach to power-sharing. The DUP response has been to widen the discussion further, apparently to include the participation in government of “unrepentant” republicans. This has resulted in dismissal of UUP criticism by dredging up old accusations that the UUP “allowed” elected SF representatives into government. Such politics does not seem futureproof, not least because increasing numbers of SF representatives were toddlers in 1994.

It does, though, explain the boast of DUP Ministers that they are not friends with SF Ministers, and have minimal contact to get business done. Is that boast conducive to governing a post-conflict deeply divided society? Does it lead by example for a shared future? Is it tenable in view of friendly associations with all kinds of characters who happen to share the DUP’s constitutional preference?

That pharisaic politics is the historical snare, from which GFA principles enable release.
Rather than opt for that release, “strong Unionism” seems to determinedly validate a republican thesis, which is as follows: ‘we’re trying to engage in progressive politics, within a conflict-resolution relationship with Unionists, but both of those elements are problematic because of a powerful minority of bigots within the present leadership of Unionism’.

It will not have escaped a deft politician like Jeffrey Donaldson (whose regret, noted above, seems genuine) that his leader has squandered more political capital, of various types, in weeks and months than her predecessors did in years and decades.

Will that type of “strong Unionism”, retain pre-eminence in Unionism indefinitely, forever repeating the pattern whereby flexibility is dismissed as weakness, before too little too late?

The DUP sees the Gerry Adams “Trojan horse” remarks as an electoral asset.

A read of the transcript, or a listen to the passage on tape, indicates the expletive is a reference to some Unionists who, he argues, “scunder” other Unionists. He names Gregory Campbell in his remarks. How many people will read the transcript? (It is available on the ‘Impartial Reporter’ website.)

The perception that “strong Unionism” is self-serving has been an electoral Achilles heel in the recent past, but perhaps lasting change will come if Unionism which is not inclusive is seen as weak Unionism.

Perhaps the future of Unionism can be seen in the more inclusive, confident, Unionism of ideas and conflict-resolution which is espoused by David Ervine’s PUP heirs like Sophie Long.

It will have to offer more than a Unionist strategy which rests on the static presumption that Irish nationalists have nowhere to go, no alternative to being belittled, or splitting.

Brexit suggests that politics is not static, and the presumption that Irish nationalists have no alternative results from an impaired view. Paisley was able to get his party over the St Andrews line, despite the recalcitrant ‘dirty dozen’, by presenting an even less appealing alternative.

If the leaders of the two traditions wouldn’t run the North, the two governments would increasingly cooperate to do so on their behalf. Might a 32 County party be in one of those future governments?
The future is uncertain, but strong partnership may be a more successful approach than the approach of “strong Unionism”.

Social share:
RHI
Previous Article‘MAKE-UP or BREAK-UP – can a Stormont divorce be prevented?’ – By Brian Rowan
Next Article “Unionism quarrels its way to agreements” – By Terence Wright