You are at:Home»News & Current Affairs»Opinion»‘STORMONT UPSIDE DOWN’ – Brian Rowan on a day when politics was rolled down its hill…
Social share: 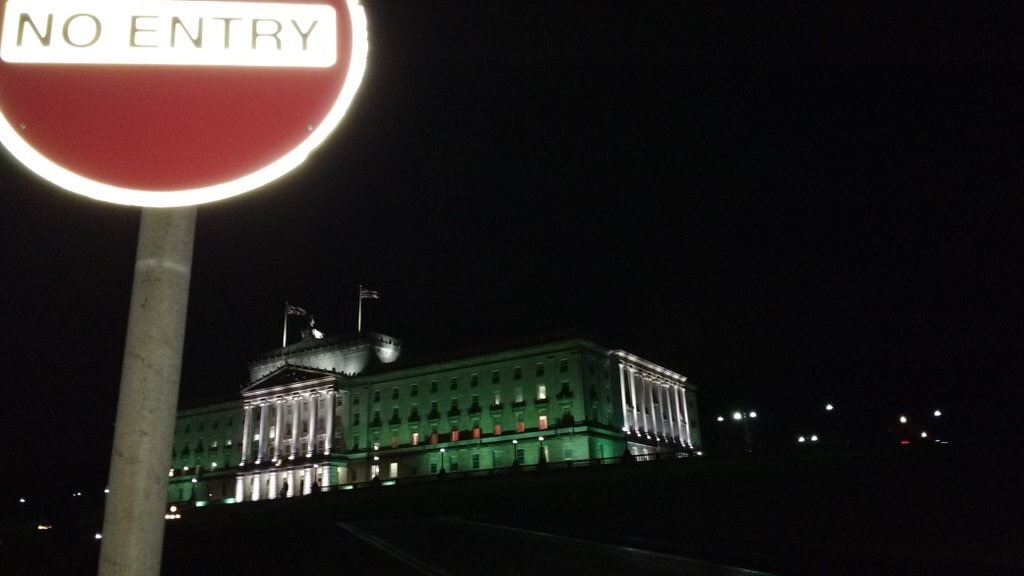 The signal that the politically nuclear option was about to be used was in that speech by Gerry Adams on Saturday.
What was interpreted by some as a hint that Martin McGuinness could resign was an under-reading of the message.
This website reported the Adams speech in the context of an ultimatum – what sounded like the final demand that Arlene Foster should step aside.
In front of a packed republican audience in Belfast on Saturday, the Sinn Fein President warned that his party would bring “this ongoing and unacceptable state of affairs to an end”.
That end could only be achieved by a McGuinness resignation. Mrs Foster had described Sinn Fein as being involved in “a game of chicken” in which the DUP was not going to blink.
This time, nor were republicans.
For days, there was background talk that this crisis could be brought to a head before the scheduled Assembly sitting on January 16. 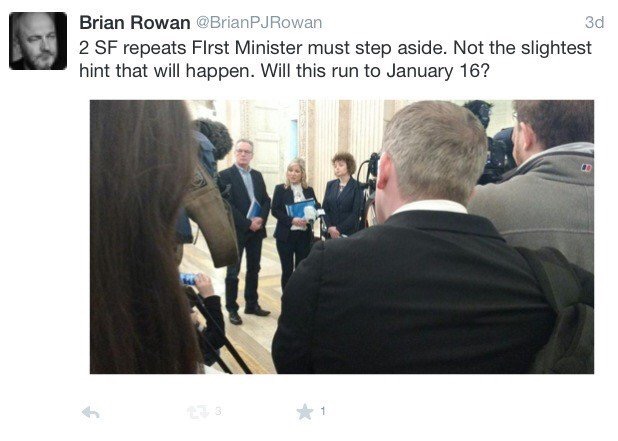 What republicans were looking at was the procedural process of bringing forward the McGuinness resignation, the when and how of that.
Their stand aside demand to Arlene Foster was rebutted on numerous occasions to the point that it was sounding like a broken record.
So, the soft exit option rejected – the hard exit choice was all that remained.
This website was also reporting this Stormont crisis in a wide frame – stretching beyond the RHI fallout.
For republicans, the what next after the McGuinness resignation is “no return to the status quo”.
An election in the short term will change the numbers but not the issues.
So, almost 20 years after Good Friday, this process has been catapulted towards negotiations and onto political ground where a New Agreement will be needed. 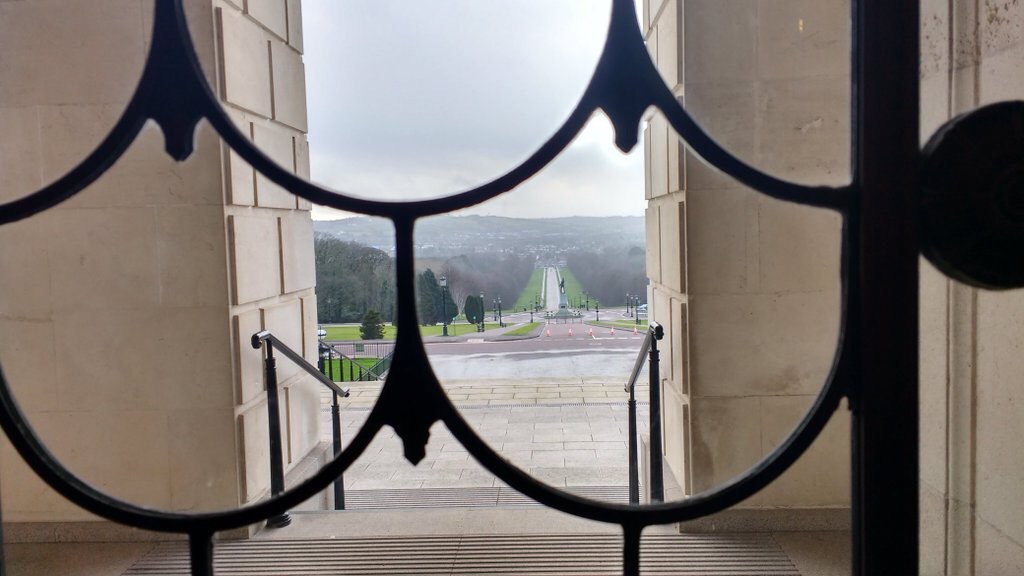 The republican leadership had been hearing its grassroots question the viability, credibility and work-ability of the Stormont institutions and openly question the supposed partnership with the DUP.
“RHI is a tipping point…the final straw that has broken the camel’s back in terms of trying to build a relationship with the DUP,” a senior republican commented.
He was describing a mood and anger expressed when Saturday’s public speech by Adams paused until the media left and then turned to a private briefing. Adams’s audience was several hundred republicans.
“People have reached the end of their tether…the anger in our community is palpable,” I was told by a source just hours after that meeting.
It is reported that the loudest cheer came in response to a comment: “Bring the institutions down now.”
Throughout the peace process a key objective of the republican leadership has been the cohesion of its movement. The resignation to force the collapse of the Executive is what was being demanded and that leadership heard what was being said – indeed, what they were being told.
With an Executive meeting scheduled for Thursday, there was no mood for business as usual.
This morning I was told there were no private conversations involving the DUP and Sinn Fein to suggest this was “recoverable” and a very clear message was delivered that there is no short term fix.
By lunchtime on Monday there was talk of “watch this space” and, then, came the confirmation of the McGuinness resignation.
Politics, the Executive, were rolled down Stormont’s hill. 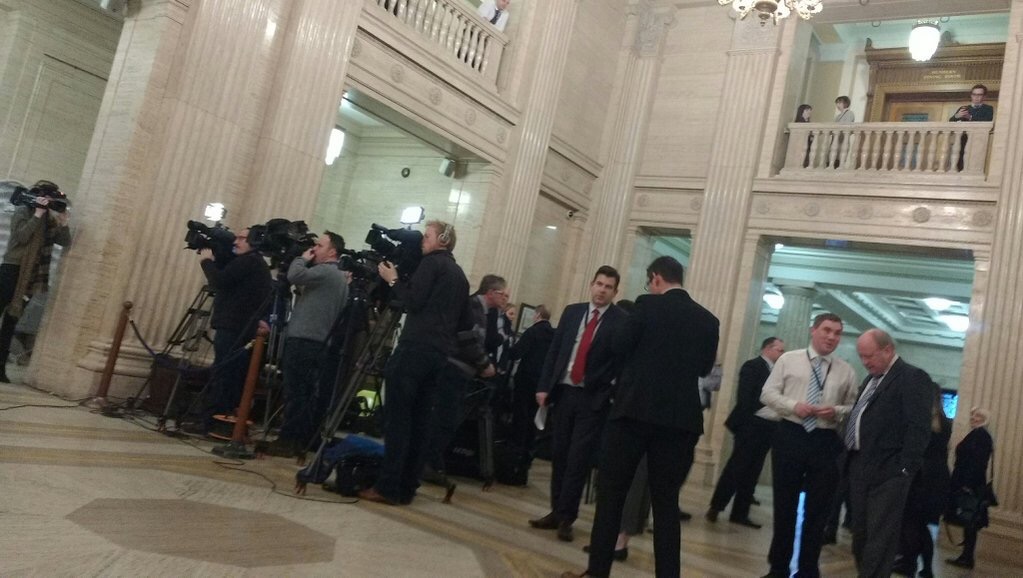 No one knows what is on the far side of this mess.
If it is about a New Agreement – that will take time. The impossible issues of the past decade and more will be on the table, including legacy.
Then there is the issue of whether republicans believe a relationship with the DUP is worth having.
In its present form, they are not interested.
What happened at Stormont on December 19th – that pantomime, shambles and the farce – was a reminder of ghosts of the past. The DUP doing things its way. Broken-up rather than joined-up politics.
Stormont had become in the words of one republican “a strategic liability”.
There was anger at Martin McGuinness’s presence at a recent unveiling of Irish artist Colin Davidson’s portrait of the Queen in London, a sense that in terms of reaching out, republicans have been doing all the stretching.
After today, can this be fixed? Not easily, not quickly and only if that republican leadership decides it is worth the effort.
In their thinking, ten years of government with the DUP have not worked and the republican mood suggests there won’t be ten more years, unless there is a dramatic, certain and very different relationship going forward.

Social share:
Arlene Foster Martin McGuinness RHI
Previous Article‘A Green v Orange War that neither side can win’ by Eamonn Mallie
Next Article Has Jamie Bryson been reading Sinn Fein’s mail? Make up your own mind.