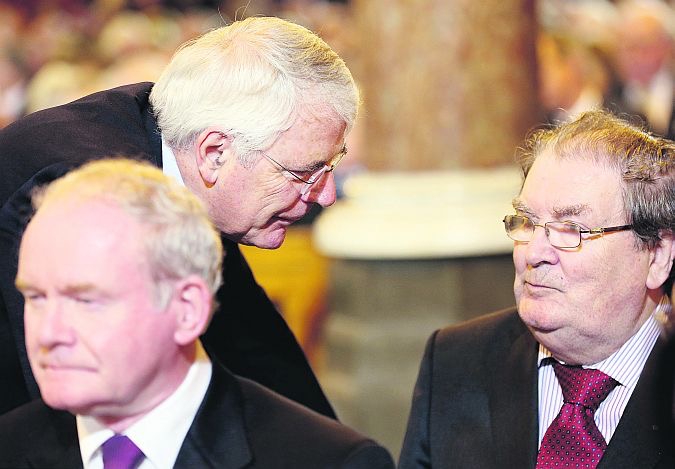 Since I began working for John Hume in the 80s I have known Martin McGuinness as an opponent, a formidable figure, a trenchant critic, an engaging negotiator, a partner in dialogue, and a partner in government and wider political leadership.

Even when I have felt frustrated by misdirected party posturing, I grew to appreciate Martin’s developed sense of civic purpose and the collegial ethic he is able to display.

These personal qualities were certainly assets in the early years of the Executive which, contrary to some references, was never suspended due to internal strains or tensions but due to internal factors in the process.

As well as doing a good job as a well-engaged Education Minister, Martin was helpful – and not just around the Executive table – in some of the budgetary challenges we encountered.

I have also worked with and watched him in various talks processes. As someone with some insight into the difficulties that can come in the joint First Minister’s office, I have been able to acknowledge Martin’s estimable performance in a pivotal political role.

One of the grace touches in Martin McGuinness’s conduct of politics has been his personal facility to acknowledge.

He has often used acknowledgement of other events, facts, positions, requirements or contributions in ways that help the tone of an often difficult negotiation while still adhering to the primary thrust of his own case.

He has also employed that power of acknowledgement in public discourse and outreach, not least in public office as an Executive Minister and joint First Minister.

This has been one of the qualities that has allowed him to achieve levels of personal political engagement across parties and public engagement beyond his electoral base.

It is therefore especially appropriate on his retirement from elective politics that Martin receives due acknowledgement of the telling contribution he has made in the advancing democratic and peaceful life of our country.

Due fulsome acknowledgement of his role in our peace process and the calibre and tenure of his service in our democratic institutions does not have to completely ignore the questions from his previous adherence to physical force or valid political differences about the course and detail of the peace process or governance.

However, we should not allow such legitimately felt considerations eclipse the democratic appreciation and personal recognition due to someone whose journey in peaceful democratic public service has seen him as both an agent and example of the change which our peace process has emancipated for all of us.

Clearly, Martin and I could argue our own differences about choices and episodes in the course of our process or other standpoints, but we can both acknowledge that we were both able and duty bound to engage in partnership with each other and others in working towards agreements and in trying to deliver the outworkings of agreement.

Albeit from different starting points, the SDLP has shared with him a sense of working democratic allegiance and mandated purpose for the institutions and precepts of the Good Friday Agreement which were ratified by the Irish people North and South.

While commentary and reflection on Martin’s eminent roles can try to draw the lines or points in the path of his change, we might do better to recognise the import of his own observations about the significance of the 1998 all-Ireland referendum for the Good Friday Agreement.

While always avowedly proud and precious about his own party’s mandate, Martin also grew in displaying a wider sense of legitimacy, responsibility and democratic obligation derived from that definitively expressed will of the Irish people.

I would agree with him that that landmark national democratic mandate should not only be seen as a redefining point for the Republican Movement to which he belongs. It needs to be seen and respected as the democratic common denominator which forms and informs the conduct and construct of politics North and South and between these islands.

John Hume drove the joint referendum concept into our process as the way of recruiting and respecting the senses and sources of legitimacy for both unionists and nationalists. This was to enable our shared allegiance to shared institutions with a compatible constitutional premise for the principle of consent.

That May 1998 is the high watermark of shared democratic expression on our island must be accorded enduring not ephemeral significance.

The source of the current apparent malaise in our Executive and Assembly arrangements has been the erosion of adherence to the primacy of the Good Friday Agreement as mandated by the overwhelming majority of people in Northern Ireland and Ireland as a whole. Going off-road from the Agreement, even for intended shortcuts, has risked us getting lost and bogged down in ways that the SDLP warned about and should now be apparent to all.

As well as the institutional departures from key provisions of the Agreement we now have a British government and some parties failing to show sensitivity to the delicately compacted constitutional precepts of that agreement, which are in turn reflected in the Irish constitution.

The negotiations which will be needed to restore due regard for the fundamentals of the Good Friday Agreement will not be just about reaffirming the consubstantial role of joint First Ministers and returning due accountability and transparency in the Assembly.

The adverse implications of different dimensions of Brexit for the institutional workings of the Agreement will also need to be addressed by all parties and both governments.

The British and Irish governments need to recognise that imposing Brexit against the consent of the North has been a factor in the recent political discoloration. (This in no way diminishes the criticism due to Ministers, parties or others over RHI and the misgovernance it typifies).

While his current health problems have forced him to step back from elective politics, I would hope that Martin McGuinness will be well enough to contribute to such negotiations given the significant perspective and experience which this week’s tributes rightly recognise.

I wish him, Bernie and their family all strength as he works for the full of his health. And I hope that as well as restoring himself he can still help in restoring the primacy of the Good Friday Agreement. Indeed, in the terms of his resignation he has shown already some personal service in that regard.

Social share:
Martin McGuinness
Previous Article‘A PAGE TURNS IN THE STORY OF MARTIN McGUINNESS…’ – By Brian Rowan
Next Article ‘H.M.S. DUP might be unsinkable, but it’s no statesmanship’ – By David Maley