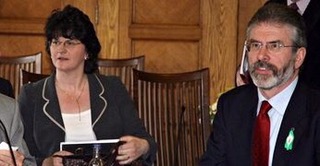 History is not on the side of Arlene in the DUP. That party ruthlessly removed founder member and leader Ian Paisley and eventually the knives came out for his successor Peter Robinson.

The DUP is no longer a party of ‘uno duce, una voce.’ (One leader, one voice – a quote infamously linked to the Italian dictator Benito Mussolini and to former Taoiseach Charles J Haughey.) For the DUP leadership, bigness is a millstone.
There is always a Judas in the camp. That day that the DUP MLAs gathered around their leader Arlene Foster in Sandy Row after her full frontal attack on the character of Jonathan Bell, former college friend and ministerial colleague, I asked myself “who is the Judas among you?”

In 1990 during a November visit to Northern Ireland I fired a question at PM Margaret Thatcher amid speculation about her future ” are you here to say ‘good bye’ to some old friends?” “Certainly not” the Conservative party leader and PM snapped back.

Forty eight hours later she had gone. Colleagues had scented blood and realised the ‘Iron Lady’s’ humiliation captured in that infamous photograph of Mrs Thatcher, tears in her eyes, as she was whisked away from Downing Street for the last time.

The RHI scandal has been a slow burn predicted to potentially cost the tax payer up to £600m.
£600m is a lot of money yet a paltry sum of £50,000 may well be the true amount of money which has landed us all in ‘political gaga.’

A decision by Communities Minister Paul Givan of the DUP to choke off grants to the tune of £50k for Irish language scholarships to Gaelic speaking regions in Donegal has cut the average law abiding nationalist to the quick. This was deemed petty and gratuitous at the same time as Tyrone GAA boss Mickey Harte was reaching out to the protestant unionist community suggesting he could see the day when the GAA would cease to play the ‘National Anthem’ and fly the Tricolour at championship matches. Harte was the third major influential voice in the GAA to travel down this road reaching out to the non catholic community – Jarlath Burns had made his feelings known last year on this issue followed by GAA president Aogan O’ Fearghail just before Christmas.

Over and over I have listened to the charge among nationalists that Sinn Fein was allowing itself ‘to be rolled over’ by the DUP in Parliament Buildings. The last Assembly elections did lend credence to this contention. There is a deep sense in all brands of nationalism that the Good Friday Agreement is being ‘hollowed out’ by the DUP with cross border bodies being reduced to nothingness while so called ‘petitions of concern’ are being deployed at will by the DUP to block progressive legislation.

Having fallen from political grace on the back of the Fr Brendan Smyth child abuse scandal the former Taoiseach Albert Reynolds remarked “it’s amazing. You cross the big hurdles and when you get to small ones, you get tripped up.”
Political death can come in many guises due to an injudicious remark, a bad decision, self interest, greed and a desire to cling to power to the point of self destruction.

Sinn Fein’s day could come too. Its leader Gerry Adams could be faced with others who conclude he has served his purpose and has run his course.

Perhaps any leader ought to peruse these words in Kenny Rogers’s best known song ‘The Gambler.’

‘You’ve got to know when to hold ’em

Know when to fold ’em

Know when to walk away

Know when to run

You never count your money

When you’re sittin’ at the table

There’ll be time enough for countin’

For Arlene and Gerry it may well be death by a thousands cuts or it could all be over
very suddenly. We are now in ‘retslu’s political gaga.’

Elections could bring us into March. “Be ware of the Ides of March” I say. Political gaga…