You are at:Home»News & Current Affairs»Opinion»‘Moving inexorably towards an election’ – By Brian Rowan
Social share: 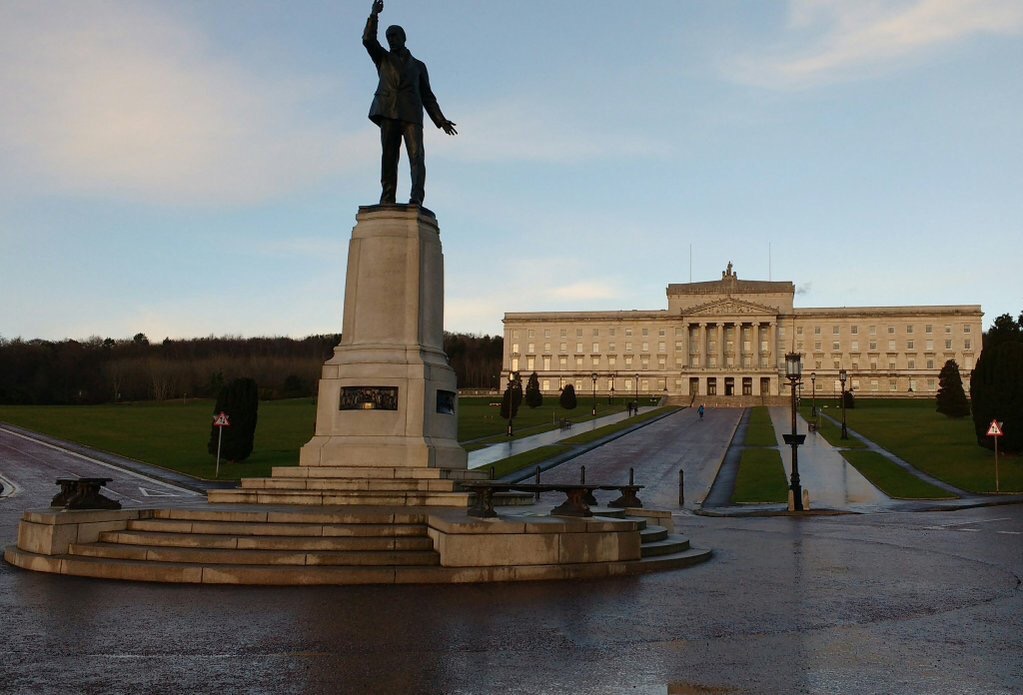 A week ago in Limerick Gerry Adams took a moment to remember David Ervine – a former prisoner and loyalist political leader.

Twenty four hours earlier, the Sinn Fein President had made a speech in west Belfast to a packed republican audience – a speech that delivered
both a message and an ultimatum to Arlene Foster.

His words pointed to the decision that Martin McGuinness would take the next day, his resignation as deputy First Minister – the politically nuclear option that has wakened some in politics out of their complacency.

Alongside panic and shock, there is stubbornness.

Two governments have come running to the scene of a political mess.

Last Sunday, Adams would have known the likely timing of the next steps.

Those of us watching did not know that the Sinn Fein Ard Chomhairle – its leadership – had met hours after that second weekend speech Adams gave in Limerick.

Its Officer Board had met on Friday.

Yet, in all of that build up, in the midst of this crisis, Adams took that moment – that minute in Limerick – to remember Ervine.

It had been ten years since Ervine’s sudden death.

Adams attended his funeral, as did former Taoiseach Albert Reynolds, sitting in a church on the Newtownards Road in east Belfast at a service attended by many in the loyalist leadership and also by then Secretary of State Peter Hain and then Chief Constable Hugh Orde.

That moment provided us with reason to have greater confidence in the developing peace.

Just months later, we would see the formation of the Paisley-McGuinness led Executive, but now what?

Politics in a cul-de-sac is the observation of the former Methodist President Harold Good. 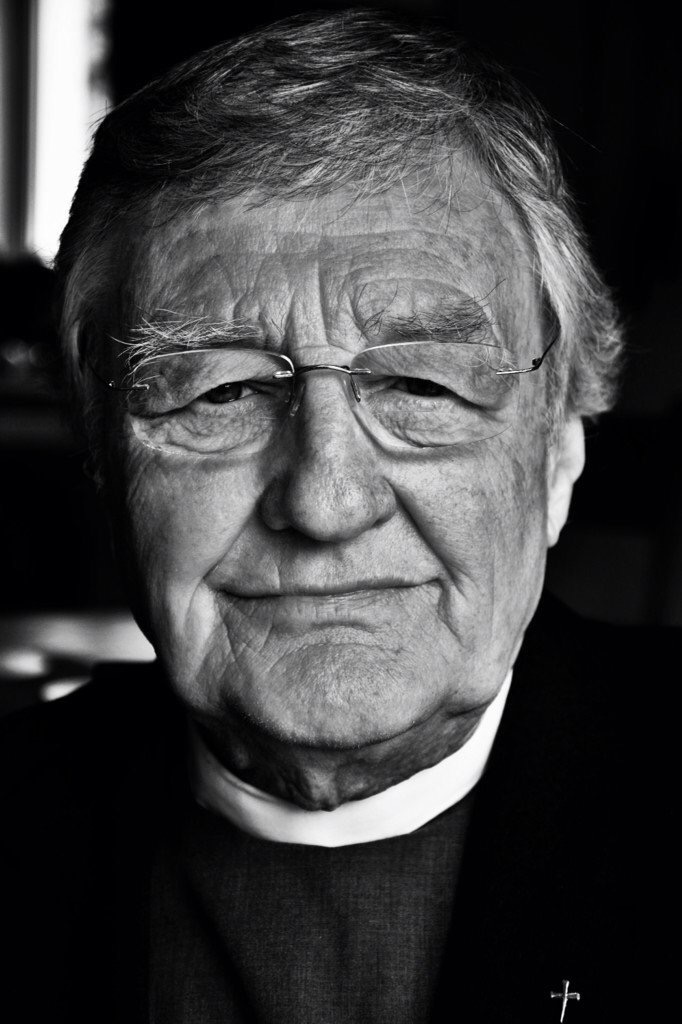 Good was one of the church witnesses to IRA decommissioning, someone who a decade ago worked quietly in the background helping Sinn Fein and the DUP take those first steps into government together and, who more recently, helped facilitate a breakthrough marching agreement in north Belfast.

“You asked where I thought we were. Immediately cul-de-sac came to mind,” he told this website.

“Probably because that is where I found myself a few days ago, and not for the first time.

“I had taken a wrong turn, which led to nowhere and found I was not alone,” he continued.

“For a moment we glared at each other with a ‘what are you going to do now’ look.

“Neither of us wanted to be the person to back out.

“Fortunately, from experience, each of us knew that the only way out of this was to manoeuvre our way out, together, to the benefit of both.

“Isn’t this what Mallie and the good book calls grace?”

The churchman is referencing the article ‘Grace’ written by my colleague Eamonn Mallie on this website just a few days ago. There has been an incredible response to that piece from many readers wondering how politics has ended up in this place.

Good is right, its wrong turn has been into a cul-de-sac.
Now it is stuck.

No manoeuvring yet “to the benefit of both”.

A few days ago a senior DUP politician told me that his party believes the republican movement “is hunkering down for a period outside government to manage the transition to their new leadership”.

“It’s nothing to do with a transition,” a senior republican responded.

“It’s a question that patience has snapped in relation to the DUP. Nothing is going to move before the election,” he said.

His last thought was a response to that DUP politician’s observation that there was just a few days to “crack something” that would avoid that election, a deepening crisis and, thereafter, the likelihood of a long period of direct rule.

“We might not be talking months. We could be talking years,” that senior DUP source had commented.

A week ago, Arlene Foster was describing “a game of chicken”. What we were watching and are watching is something much more deep rooted.

There has been a very public breakdown in relations involving the two parties of government and no sense that it will be easily or quickly mended.

“I think there’s an implacability about the Shinners,” a close watcher of this crisis commented.

“I think it’s also about testing the Brits. The British Government hasn’t performed a challenge function with the DUP. Up to now, there have been no consequences for bad behaviour” he said.

So, we hear this conversation about the need for a new agreement.

For republicans, this means an agreement on implementation, and certainty and confirmation of the principles of partnership and power sharing written into the Good Friday Agreement.

It is about settling issues such as a legacy process and Irish Language Act and it is about respect.

On Sunday afternoon, Sinn Fein again made its position clear: 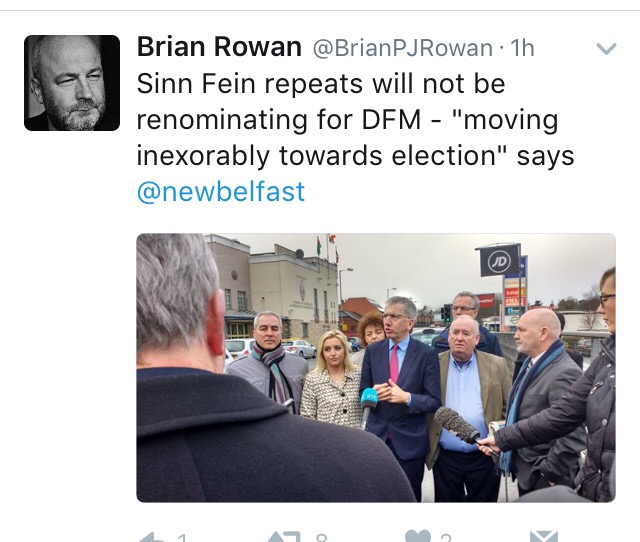 There are fears about what could be on the far side of an election – the “toxic” scenario of direct rule and brexit.

Politics is in that cul-de-sac described by Harold Good, no one yet able to perform the manoeuvre that will take it away from arriving at some dead end.

At some point, there is going to be another negotiation not just on republican demands but on the unresolved issues that unionists want addressed.

The idea that we have been here before is much too complacent a thought. This is a different and a defining moment.

Social share:
RHI
Previous Article“Unionism quarrels its way to agreements” – By Terence Wright
Next Article Ghost of 1969 – a restless Nationalist people & as Eamonn Mallie explains only ‘DUP crumbs’ on offer