You are at:Home»News & Current Affairs»Opinion»‘At the Crossroads with O’Neill & Paisley’ – By Colm Dore
Social share: 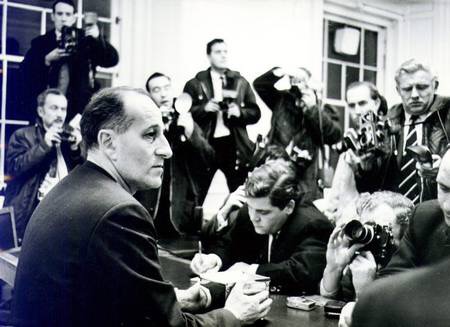 The leadership of Unionism is at another crossroads, with another O’Neill, and another Paisley.

Historical resonance abounds.
Sinn Fein has rarely been more in tune with such a range of Irish nationalist opinion.
One reason for that is that this is not the 1980s. The Troubles meant a type of containment and stability.

It is impossible to avoid Jim Molyneaux’s observation that the ceasefire was ‘destabilising’.
Today, when the DUP says it will not “bend the knee” and “surrender to SF”, it may be setting its face against something more than SF.

That includes nationalists “with a small n”. They do not see why parity of esteem for Irish identity, and equality in government, should be controversial.

More remarkably, it is possible that rejecting Agreement commitments is a rejection of the constitution of this place.

The Belfast Agreement was endorsed by the people, to an extent to which Brexiteers can only dream. Is rejecting it a rejection of democracy? In this Decade of Centenaries, some see parallels with the Home Rule crisis.

The DUP frames debate on other grounds. Parity of esteem is a SF demand which the DUP, the leading exponent of “strong Unionism”, is best placed to resist.

There is much talk, in NI, of the need to move beyond ‘orange v green’ politics.

When Naomi Long recently expressed solidarity with Irish language activists, it indicated that parity of esteem is not a ‘green’ issue.

If parity of esteem spills into other questions of equality, could tribal containments crack open? Could it clear the way for wider progressive politics?

That might channel 1790s pluralism, when ideas transcended differences of Catholic, Protestant, and dissenter.

Some might find that this chimes with James Connolly’s equation of liberation causes.

In the short-term, parties other than the DUP and SF must be tempted to use the image of equivalence between those two parties.

That would be a straightforward route to votes. Hearing is freighted with history, and just saying “Orange & Green election” can ping equivalence into minds.
It can be difficult to follow John Hume’s example, relegating party self interests.

Spilling parity of esteem into other areas may also deliver a second profound change: creating a shared “now”, upon which to build a shared future.

That is evoked by Ian Paisley’s remarks about Martin McGuinness, in which he highlighted the need to build relationships.

To what extent are these thoughts shared by DUP leaders?

Ian Paisley emphasised that there was no need to qualify his remarks. Others in politics, and media, have tried to do so by asking republicans to unilaterally apologise for the past.

To nationalists, that is another example of inequality. Official history, as expressed by a statue in Lisburn which extols the virtue of the UDR is not their history.

In his poem, ‘The Nod’, Seamus Heaney described everyday disempowerment in the pre-1969 north:

‘Saturday evenings we would stand in Loudan’s butcher shop.
Red beef, white string,  Brown paper ripped straight off for parcelling  along the counter edge.
Rib roast and shin  Plonked down, wrapped up, and bow-tied neat and clean  but seeping blood.
Like dead weight in a sling,  Heavier far than I had been expecting  When my father shilled out for it, coin by coin.
Saturday evenings too the local B-Men,  Unbuttoned but on duty, thronged the town,  Neighbours with guns, parading up and down, Some nodding at my father almost past him  as if deliberately they’d aimed and missed him
Or couldn’t seem to place him, not just then.’

The insufficiency of the past as the basis for building a shared future was recently shown by controversy around a film about Bobby Sands.

In discussions, the word “terrorist” came easily to moderate Unionists. Which current nationalist (or PBP) MLA would describe Sands with that appellation?

“History is a nightmare from which I am trying to awake”, said Stephen Dedalus.

‘Though we live in a world that dreams of ending that always seems about to give in something that will not acknowledge conclusion insists that we forever begin.’

The immediate, official, DUP response was social-media imagery which depicted Michelle O’Neill as an extension of old enmity.

Similarly, nationalists hear echoes of the past, of Lord Brookeborough, in the attitude of some to the Director of Public Prosecutions, Barra McCrory a distinguished lawyer from their community.

In the South, civil war pain was bridged by agreeing to go forward from a shared “now.”

Is that less necessary in the north, after centuries of division?

Is there a better way to face down “dissidents”?

Widespread violence is not in prospect, but it is worth thinking about Philip Orr’s play, ‘Half-way House’. One character says that, although there is little shared understanding, the young have escaped the past. The setting is 1966.

Social share:
RHI Stormont
Previous Article‘Truth that Dare Not Speak its Name’ – By Earl Storey
Next Article ‘Seeing the wood pellets through the Trees…’ – By Brian Rowan