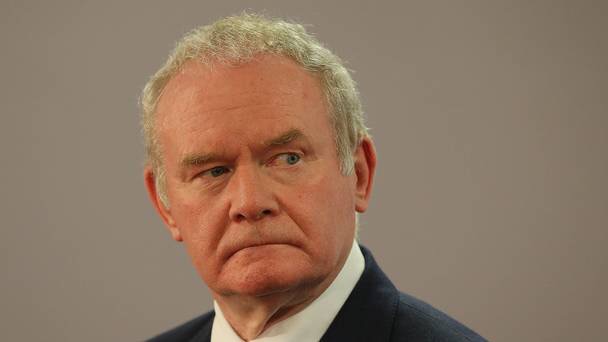 At least Deputy First Minister Martin Mc Guinness MLA, probably using the local idiom to explain that he was feeling fine rather than the dictionary meaning of feeling majestic – although who knows – did not accompany his reply with a royal wave when answering the question put to him by Joanne Dobson MLA.
In truth the question, focusing as it did on how the Minister felt as a Republican using a royal prerogative, probably pleased a few DUP members as well as those seated on the benches closer to Joanne Dobson but in truth it was a somewhat weak attempt at point-scoring, a self-indulgent waste of parliamentary time by UUP strategists and an indication that those parties opting to go into opposition need to up their efforts. At the moment, with occasional exceptions, they even do nothing badly. Smouldering resentment at being outside the tent is no substitution for constructive, cohesive and meaningful opposition.

The DUP and Sinn Fein buoyed by filling the Justice Ministry and needing to portray all the best aspects of ‘ A Fresh Start ‘, not least by sorting out their differences behind closed doors and avoiding public disagreements, have moved, judging from the handling of the appointment which called for secrecy and use of ‘ royal prerogative ‘, from collaboration to collusion in getting their man.

It is entirely in keeping with parties not averse to abusing the use of Petitions of Concern as a mechanism of defence and party interest.

Within the NI Assembly both parties co-define each other as never before.

Based on their response to any critique regarding the recent appointment the respective leaders in their Ministerial roles expect approval for their decisions no matter how unacceptable or unethical. Parity of esteem, equality, transparency and social justice are falling victim to overlapping and cynical interpretations compromised by the exercise of unchallenged government devoid of any internal ethically based quality assurance. Any claim to this merely serves as operational mythology.

Were this not so, the manner of the recent appointment and the decision-making process which informed it, would have been open, fair and competitive. Instead, It is a sloppy example of questionable adherence to legitimacy to those outside the corridors of power and this is the real concern. When set alongside well-recognised costly policy failings and the world of small expectations that Stormont is becoming in respect to major issues, it is hard to escape the conclusion that the values and the type of community for which the electorate voted in 1998 are to be forever postponed.

Social share:
Martin McGuinness
Previous Article‘LEGACY TALKS – everybody in the front door…’ By Brian Rowan
Next Article ‘THE INTELLIGENCE WAR – winners and losers…’ By Brian Rowan