You are at:Home»News & Current Affairs»Opinion»‘Stretching out the hand of friendship is not a betrayal of the tribe’ – by Brian John Spencer
Social share: 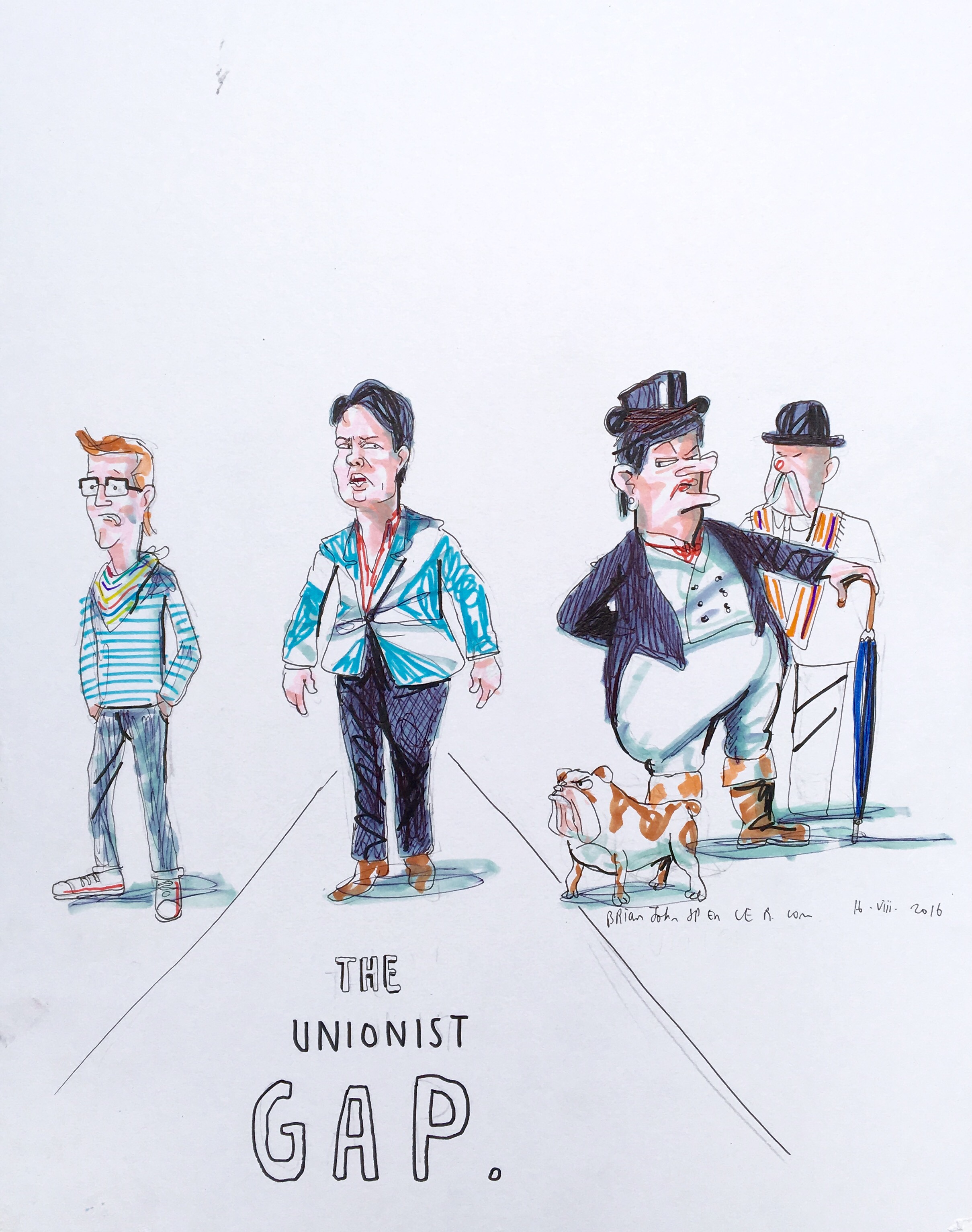 In September 2013 I asked: why did unionism turn away from the passing of Seamus Heaney?

In October 2015 I asked why unionism turned its face against the passing of one of Ulster’s great culture and history makers, the playwright Brian Friel.

Now in August 2016 I ask again, why has unionism turned its back to another central figure of recent Ulster history, Bishop Edward Daly?

A hello, a thank you, a hand-shake and a condolence letter are the basic table manners of life.

Attendance at the funeral of a cherished community leader is a basic function of public office, whether the deceased is a spiritual or political adherent or adversary.

While the First Minister paid tribute to the retired Bishop of Derry, she did not attend the church service.

When the Fermanagh born Duke of Westminster died on August 10 2016 the First Minister tweeted her condolences, public thoughts for the third richest man in Britain likely unknown to most in Ulster.

In contrast there were no such condolence tweets on the the day Bishop Daly passed, August 8 2016.
The austerity of words and action makes unionism look, once again, mean and cold-hearted.

Arlene Foster is the leader of the DUP and with Martin McGuinness are the co first ministers with responsibilities to all the people of Northern Ireland.

Fionnuala O’Connor recently wrote that we’re living in the age of “perked up Unionism“, with Newton Emerson concurring in a column.

The recent Assembly elections confirmed the perkiness of unionism, and continued the trend of peak nationalism.

Yet when it comes to gestures and outreach unionism remains miserly, and nationalism perky and magnanimous.

Trump shows that those shouting loudest hide insecurity, while those who communicate softly belie confidence.

Likewise, those who build bridges and walk uncomfortable paths show not weakness but strength.

The gesture gap between nationalism and unionism highlights confidence and insecurity respectively.

In this new age of “perked-up” unionism and fresh leadership, unionism should be able to untether itself from the old mould of defiant insecurity and journey into a new space and demonstrate confidence and generosity.

On the passing of Bishop Daly, civic unionists with whom I spoke with were shocked at the lack of elementary human solidarity.

“I don’t think they’ve [the Protestant community]ever been able to cope with that – so you walk away from it in a sense.”

Leadership by definition is the opposite of “walking away”. It is the role of leaders of Northern Ireland to lead and not to walk away, to show Protestant and catholic how to heal the hurt and division of the past – a handshake, a word, an embrace.

Bishop Daly was about so much more than that Bloody Sunday event and that famous photo.

The Foster absence underscores the Unionist Gap, something that is becoming more and more apparent.

The unionist community is wide and diverse, including a catholic unionist demographic. The civic and Catholic unionist is the keystone to the Union that unionists cherish, yet this group is ignored, often treated with contempt.

There are less than 30,000 members of the Orange Order, a tiny proportion of Northern Ireland’s 1.8m inhabitants. Orangemen are 21 times more common in the DUP than in the general population.

“There has been a shift and change I think across the electorate. Across upper bann i canvassed many areas where there would be a unionist voice and a unionist vote, and I would have to say I was pleasantly surprised with the reception I received on the doors. Often in the past you would have been chased or people would have taken great exception to you calling at their door. People were willing to, the unionist electorate were willing to engage with me on the doorstep. Now they were putting across their point of view across as unionists, but it was been done in a way that was amicable, we were able to share ideas with each other, we were able to challenge each other, and I don’t think this fear of Sinn Fein that the DUP are promoting will work for them in the future…

Joe Brolly said at ‘West Belfast Talks Back’ in August 2016:

“Gregory Campbell talks about the GAA for example, he talks about Kevin Lynch. I’ve heard these guys, Nelson McCausland and all, and they create those impressions obviously with working-class Protestants, and it doesn’t wash with the middle-class Protestant who don’t listen to any of that stuff.

Like you have great Gaelic football teams now like Ballymena where half the team is Protestant. They were U14 all-Ireland champions last year. I went up to the prize giving. Half the boys from the All Saints team are playing rugby at Ballymena Academy.

With the middle-classes, none of this washes with it. As for working-class kids, I have absolutely no doubt there are working-class kids in and around the Diamond and who think, in Dungiven, that it’s like North Korea, that children are lining up in squadrons and marching up and down on the Kevin Lynch pitch being trained in small arms.

This is the image that must be created – these fenian bastards, you don’t know what the fuck they’re at – that’s what the message is Gregory – you know that’s the message – you fucking couldn’t watch these Fenians”.”

“The DUP leadership is at one with its members in being old – and disconnected from the modern world. Neither the leadership nor the party is representative of unionists as a whole.”

“None of these internal émigrés participate in or endorse the antics of the yahoos waving flags or hammering big drums outside Catholic Churches… Yesterday’s [Haass talks] failure will simply reinforce the majority of unionists in their opinion that, in the words of Alex Kane, they prefer to go to the garden centre than bother voting.”

The unionism that Foster so often represents is the hard edged and rasping traditional unionism of bands and parochial protestantism.

This is only a tiny proportion of the Protestant and unionist demographic. Much of the unionist vote has been orphaned; but for the mean-time they are voting for the DUP as the lesser of two evils.

Speaking as a garden centre Protestant I agree with Mick Fealty’s analysis that “Martin McGuinness is now the greatest recruiting sergeant for the DUP.”

There is a still a Cromwellian aspect to Sinn Fein for many civic unionists – the man with the armalite is as harrowing to the Protestant as the pitchcapper is to the Catholic.

Alex Kane recently wrote that “The Union may look safe for now, but unionism can take nothing for granted.”

If unionism continues to invest in a mean and narrow path, it’s returns will contract, imperilling it’s very future and the very Union.

There is a way forward, and I believe that the leader of the Scottish conservatives Ruth Davidson has shown unionism in Ulster the route to securing the Union.

The leader of Scottish Tories said in her recent Amnesty NI lecture ‘From Scotland With Love’:

“There is a reason in terms of talking about the space that can be created for people who are from a Unionist background and now you can support this without losing support within their own community.

I’ve just had an election where I more than doubled our vote. We went from 15 MSPs to 31, in the 5 elections that we had in the parliament, our previous highest tally had only ever been 18.

Now I would not have attracted people who had previously voted for other parties, whether it be Labour or Liberal Democrats, to come and support my party if we had been the Tory party of old, that was socially conservative as we used to be.

You know I’m from a socially quite liberal, almost sort of libertarian streak of my own party, but fiscally very conservative – I believe in low taxation and all that sort of stuff.

I have been able to, and the party has been able to demonstrate a level of social liberalism whilst still attracting people to the cause, keeping our voter base and expanding it. So there are ways in which you can demonstrate a commitment to your own community but also look outside your own tribe.

I think there is an example in Scotland, that I could cite from ourselves that can show how it can be done.”

To secure the Union unionists need to expand the cause. That requires a make-over and reconfiguration of tactics – accommodate, convince and seduce. As the story of Ruth Davidson tells us, that requires change through brave steps forward.

Social share:
Arlene Foster Bishop Edward Daly Bloody Sunday Brian John Spencer Derry
Previous ArticleA Protestant voice in the wilderness in pursuance of decency.
Next Article ‘The Past – and the push for an autumn agreement’ – By Brian Rowan