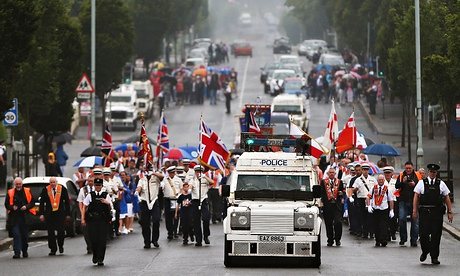 Every word will be scrutinised – when the fine detail of the north Belfast marching formula is revealed.

Think of the policing money that runs down the drain at this time every year and upon what else it could be spent – and think also of the battered image of Belfast and how this place, supposedly at peace, is undermined.

There is nothing dramatically new about the proposed agreement.

This idea of a return march to complete the banned 2013 twelfth parade has been on the table before – as a last return march.

That final full stop has not been placed on this proposed agreement. Rather there will be a moratorium and a forum to allow for dialogue or conversations in a better atmosphere.

The five annual morning parades would remain, the protest camp at Twaddell would end and, at 07.30 this Friday morning July 1, the return parade would march away from the point at which it has been stuck for the best part of three years.

But there is a but.

There is not buy-in from all three local lodges but there is majority support and, it is on this issue, that crucial last-minute meetings are happening.

“Two of the lodges are fully in support of the proposed agreement,” one source said.

A scheduled 2.30 news conference on Monday afternoon has now been delayed with no definite indication of when it will take place.

Another issue is that the Greater Ardoyne Residents Collective (GARC) has not been part of the talks that have come up with this latest plan.

Their response to any announcement will be watched closely.

The big question is, can those who have been working on this plan make it work?

They will need help – publicly stated support from across the communities, from the churches, business and from politics.

Marching disputes are part of the unfinished peace.

A new Commission on Flags, Identity, Culture and Tradition has just been appointed.

But what is being worked on in north Belfast is a local initiative with outside help.

The talking towards this proposed agreement began after the Orange Order decision in April to cancel one of its nightly protests in the Woodvale area as a mark of respect for a church vigil for the murdered north Belfast man Michael McGibbon.

That decision encouraged new and different steps – created a new and better mood.

Will it work? It can if people want it to.

This is the next test for this proposed agreement – the focus of last- minute discussions.

Social share:
Previous Article‘Loughinisland Report – what next?’ by Brian Rowan
Next Article Remembering and learning at the same time