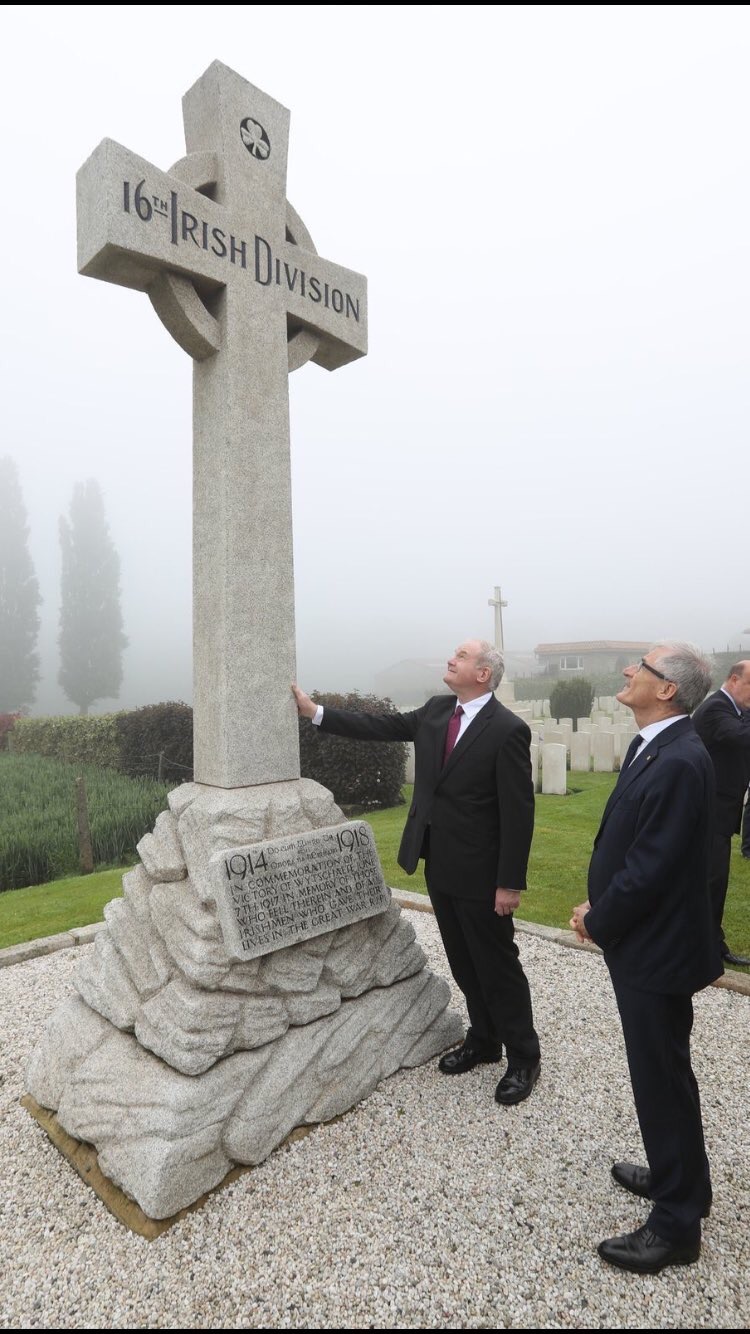 DUP Education Minister Peter Weir MLA visits an Irish medium school; the First Minister accepts the decision of Sinn Fein Michelle O’Neill MLA regarding the use of blood donated by gay men and the Deputy First Minister tiptoes though the trenches metaphorically and actually.

This indeed seems A Fresh Start, but to what degree?

That these events were juxtaposed against a background of cultivated government over Justice where the d’Hondt principle is conveniently ignored and disclosure of the brutality of the Kingmills massacre, alongside the re-opening of an investigation after forty years, says much for the sense of denial and expediency that continues to permeate our political institutions.

Do leaders believe that the Fresh Start desired by the electorate is satisfied by photo calls bordering on formulaic public ceremonials and trade-off scenarios?

These cannot detract from the impression that the Fresh Start remains aligned with the culture and politics of mistakes and wrong-headed decisions.

If there existed the confidence to believe that the leading parties are taking ownership of their past failings then it would be reason for optimism but there seems little to suggest that the fault lines of selective democracy and selective morality have been erased.

In spite of emerging as the two leading parties the election was a chastening experience for the DUP and Sinn Fein. The electorate demanded delivery of meaningful politics addressing issues affecting their lives and West of the Bann, Sinn Fein drew heavy criticism for failing to deliver on investment and infrastructure.

The openness of a Sinn Fein MLA, subsequently unsuccessful in the election, in acknowledging this and claiming that Sinn Fein was ‘ up for ‘ the Fresh Start, was surely recognition of the criticism but election results suggest that it came too late, for it this that is reflected in results.

The DUP made a better job of things. A fresh face in the leadership role identified with robust resistance to republicanism and willingness to battle to preserve the orthodox unionist narrative which denies the process that contributed to conflict, had sufficient appeal when allied to a commitment to deliver for the electorate not least in curbing the roguery of Sinn Fein policies on education.

The vocabulary and rhetoric had sufficient appeal among those who voted to return the DUP as the largest party and the main party of unionism. Now as the DUP and Sinn Fein form an Executive populated mainly by the two parties, ‘delivery and outcomes ‘ are put on a political pedestal for all to see.

In the case of the DUP political sacred cows on gay blood and Irish medium schools are hastily abandoned.

It is not just the almost 50% who have no identifiable politics who ask what were all the rear-guard actions on these issues during the last mandate about and why were they allowed to detract from vital matters of welfare, health and the economy?

Has the DUP suddenly become aware of the fact that many unionists have no major problems with an Irish language that is part of their heritage?

It cannot all be due to the fact that some of the more vociferous rage politicians of the DUP are now ensconced in Westminster.

If we are only now getting an emphasis on delivery and outcomes does this explain the meandering and stop-start nature of politics that characterised the previous Executive dominated by the two largest parties? Can they really deliver this time? Can First Minister Arlene Foster MLA deliver progress on social justice issues where her predecessor failed or will her DUP revert to territorial and social space inherited from the past?

The Deputy First Minister’s visits to the World War One battlefields and cemeteries of Flanders and Northern France are as welcome as they are overdue.

Some time ago a group of 6th form students drawn from a variety of Controlled and Maintained schools made this same visit. On their return some of the individuals described the experience as life changing. The sheer volume and diversity of names and ages on the monuments at Thiepval, Vimy Ridge, the Menin Gate and the many cemeteries scattered over the area, all of them the result of war, serve as a reminder of the human cost when conflict is the preferred method of bringing political change; that when leaders call for the sacrifice of blood it is all too often someone else’s. The Deputy First Minister would do well to pause for reflection on his past political choices as would many of our leaders.
If we do not make our past clear and acknowledge our failings, then we will not progress unburdened into a Fresh Start. Mr McGuinness has a key role to play in moving beyond a belated acknowledgement of the role of Irish soldiers of all persuasions who served in the regiments and uniforms of different countries in World War One.

He speaks of reconciliation but to what end? Reconciliation has to go beyond acknowledging different narratives and tolerating diversity. It needs to be framed around truthful answers to pivotal questions that bring understanding and healing rather than issues and gestures selected to serve a political agenda. To do this over the First World War is tantamount to stealing the dead. It is an all too common flaw in Irish politics, North and South.

Inclusion is writ large into our politics but if we do not share our truths then inclusion remains superficial and devoid of integrity, politicised rather than ethical.

Delivery of outcomes on health, the economy and education are likely to prove central as the new Executive seeks to consult on a Programme for Government and this was the very clear message from the electorate which gave a mandate to politicians to work together. These are the bread and butter issues on which all governments should be able to build consensus and govern with effect. As to the possibility of underlying issues in need of resolution beyond public gestures that only mask the tunnel vision of tribalism, the reality of A Fresh Start remains untested.