You are at:Home»News & Current Affairs»Opinion»Is The Ulster Unionist Party snatching its clothes back from the DUP in going into Opposition asks Terry Wright?
Social share: 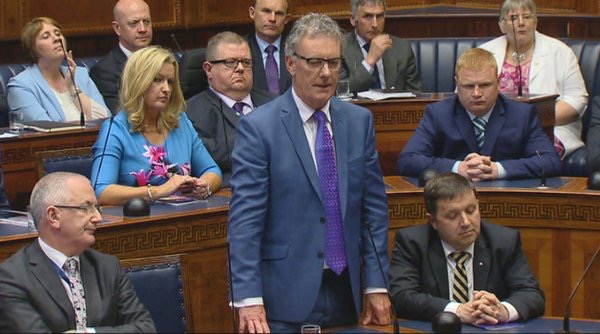 Stormont is not Westminster. In the latter politicians do not choose Opposition. They are placed there. It is a mark of limited success within the narrow democratic capacity of a particular voting system. In Stormont, it is a choice but one that needs to be shaped by positive challenge and constructive integrity. To see it as the commencement of a battle and an opportunity to score political points over seating arrangements is not encouraging and borders on self-indulgence.

To engage at this level is to forfeit the higher ground of distinctly reasoned principles whilst pulling yourself closer to the people. It is they, above all, who know what everyday life is like when living with the consequences of decision-making by polarised interests who cannot trust each other to deliver justice and lack the decency to feel ashamed at fudged compromises and narrowing output. Rather is it to snuggle in a comfort zone of the hurt and resentment of electoral disappointment with the potential of its becoming a vicious circle of confrontation, criticism and ridicule. To visit this on the project and process that is Stormont will be to make for a mental diet of negative political exchange and there is no future in it. Those parties, who were in the last Executive and were effectively an opposition within, should know this most of all. It is no short cut to power. You might as well cross your fingers and hope.

Since losing its place as the main party of unionism – one former UUP Party President chided the leader of the day that the DUP had been allowed to steal its clothes – the UUP has meandered in policy and strategic terms. The light that seemed to have been ignited by the Westminster successes of Danny Kinahan MP and Tom Elliott MP shines less brightly now. Every time it seems The Ulster Unionist Party have turned a corner it is shown to be walking in circles. There is an inherent dynamic that feeds this.

Within the UUP there are those who are DUP-light. Their main differences with the DUP are personal and historical. Many would share the fundamentalist views of the DUP on social issues and close adherence to the Loyal Orders. Hence the limited room for manoeuvre on gay marriage and parading. During the leadership contest involving John McCallister and Mike Nesbitt MLA when the party rejected opposition, there were many leading individuals who favoured the strategy yet doubted the capacity of the party to deliver. They viewed the party as being in opposition in any case.

In the ensuing years the party has been managed rather than led. There are obvious improvements in the professional production and presentation of policy, PR and internal self-discipline. However, in terms of strategy there seems to be questionable reliance on spin to justify obvious posturing and serendipity. There is something of this in the current leap into opposition. It is too early to offer a firm assessment but this will be made easier by the output and performance of the MLAs.

At the very least the UUP has the opportunity to disentangle unionism and the web of dysfunction that has prevailed at Stormont.

The UUP cannot be used any longer to provide political cover for the uncomfortable compromises of the DUP. Until now the electorate, with several parties having the right to nominate Ministers had no opportunity to choose an alternative government based on policy choices rather than identity politics.

Designation does not need to work as rigidly to cement fear-fuelled politics. With other parties stepping out of the Executive, the DUP and Sinn Fein will be compelled to concentrate on outcomes and delivery rather than process. It will be interesting tonote if Sinn Fein will be comfortable with this. It is not perhaps the Fresh Start it had planned. They will have to face critics who will see them as enemies of their own beliefs.

The potential crisis over Justice is probably serving as a distraction at present.

Assuming that the Alliance Party takes the Justice Ministry – even if is not David Ford MLA who must be bound for the House of Lords one of these days – the UUP and any other parties who opt to form an Opposition will have time to build capacity, develop evidenced-based analysis, embed meaningful accountability and recalibrate the Assembly. In so doing they can bring absentee voters back into the polling booths. Many of those who fail to vote are not apathetic. They do not vote because they reject the politics on offer and see no viable differentiated alternative offering progressive social and economic policies. They simply see parties that are more or less the same to a greater and lesser extent.

A former leader of the UUP has described going into opposition as courageous. The implication of this remark is that not to do so would be to display timidity and unnecessary caution.

Perhaps the UUP is donning new clothes to replace those lost to the DUP. Time will tell whether or not they exhibit the same illusory qualities of the emperor in Andersen’s well-known tale.