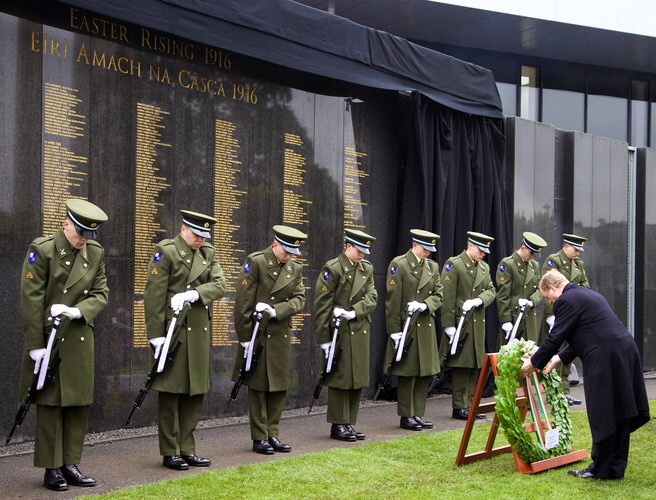 We’re all unionists now. Being a member of a group of nations that pools power and decision-making is all the vogue.

Being Irish and British, British and Irish is, for many, as natural as breathing.

Ireland and Scotland-England-Wales (SEW) are at it’s closest point 11 miles apart. The formal title of these two islands, the archipelago, is the ‘British Isles’.

The two islands are a Venn diagram of shared and overlapping habits and customs. They breathe the same air (you know you’re in a different country when you land in Europe, America or Asia) and share the same mental circuit; the same nervous system of language, trade, culture and blood. Historian A.T.Q. Stewart wrote that people used to row from County Down to Stranraer:

“Incredible as it now seems, hundreds of ordinary people who had been deprived of their ministers rowed across the North Channel to Scotland on Sunday afternoons to take communion, and returned the same day.”

Frank Frankfort Moore (1855–1931), unionist writer born to Presbyterian parents in Limerick and educated in Belfast at RBAI, wrote in ‘Truth About Ulster’:

“We reckoned it no feat to cross that narrow channel, and to watch the Galloway hills, already seen to be green by anyone looking out from Donaghadee or Ballywalter, become clearer and brighter with every hour’s sailing, until the beautiful undulations of the shores of Lough Ryan were on each side of us, and we could run our boat comfortably into a natural harbour with a sandy ground to drop our anchor into. And when we hailed one of the fishermen outside his own cottage, we found him and his people speaking exactly the same dialect as was spoken on the Irish coast which we had left a few hours before; for the Scotch of the County Down coast from Bangor to Portaferry, is the Scotch of the coast of Galloway.”

Heaney put into symphony the special relationship and complicated intimacy of these two islands when he said:

“There’s a hidden scotland in anyone who speaks the Northern Ireland speech.”

Our shared accents and vernacular show that the Irish Sea is no border; we grow from the same turf. I may be Irish but I have a Caledonian umbilical cord.

During the Home Rule crisis and in the months preceding Easter 1916 Dublin was a British city full of “Britishers”, unionist and nationalist. Todd Andrews wrote:

“Dublin [in 1901]was a British city and accepted itself as one.”

Like it is between Ireland and Europe today, a home legislature connected to a supreme legislative body then seemed eminently sensible.

Some Irish will find the Ballagh-analogy perfectly appropriate, but just as many will find it an outrageous suggestion. For so many Irish people, O’Connellite nationalists and your unionist brothers, SEW is not properly foreign, now or then. For Edmund Burke and Henry Grattan and so many Irish patriots you could seek a separate parliament but never fully separate the two islands. George Orwell wrote:

“It is very rare to meet a foreigner, other than an American, who can distinguish between English and Scots or even English and Irish.”

Nationalists and republicans like to say unionists, by rejecting their Irishness, suffer an identity crisis. Yet nationalists and republicans, by rejecting their Britishness or even the profound British links, are showing an identity overdrive. Anglophobia isn’t healthy; it gave us the fior gael, the Irish-Irelander.
And here we are now, with the new wall at Glasnevin acknowledging dead British soldiers, republicans are doing a unionism – green psycho-squawking babies.

Unionism is very good at amplifying its rage in a way that diminishes its cause. Republicans are almost always too smart to let this happen, they can even spin rage aimed against them into political capital. But with the Glasnevin concession being made, on sacred republican home soil, it was obviously just too much for some.

The term ‘Big Mad Children’, from a British Irish Association chairman, is a very apt descriptor for the unbending unionists and republicans whose company we must endure.

The Good Friday Agreement ushered in the age of the duality. You can be whatever you want, and everything, they say, is to be shared and cross-community. Nationalist and green culture has enjoyed a northern resurgence, to the chagrin and pushback of the DUP and other hardliners.

This has been reciprocated in the south. We have seen the acknowledgement of the minority culture and the British connection. However, with no unionist community, it will never be as controversial even though fringe republicans protested at the Queen and the opening of the Cross of Sacrifice.

Seosamh de Brún, an Irish Volunteer who spent Easter Week in Jacob’s biscuit factory wrote in his diary during the Rising:

“I have been to confession. First time for years. I feel better for it. I do believe that the Catholic religion and Irish nationality are better in meaning than synonymous – they are so interwoven. The spirit of Christ and Irish Nationality the spirit of progress and sacrifice.”

No longer is Irishness coterminous with Catholicism. No longer will Northern Ireland privilege Protestantism.
No longer can Northern Ireland be unionist only, and no longer can Ireland be republican only.
It has been remarkable and enlightening to watch the Glasnevin-gate. So much in the North has been about equality and parity of esteem, and about the non-hierarchy of victims. Yet as soon as the tables are turned this has gone out the window.

Compare this with IRFU’s 1916-2016 charitable walk and cycle. It’s perfectly balanced between green and orange, but appealing almost only to the muted and middle-of-the-road community that nobody will even notice it and the sterling reconciliation work it is doing.

There are many who watch the Big, Mad Children with total bewilderment, the cynical and apathetic type. Yet so much more of Ireland, North and South (as typified by the IRFU scheme), is mellow and multifarious when it comes to identity. It is time to bring forward that voice and their mellow example to the foreground; and the media have a role and responsibility.