You are at:Home»News & Current Affairs»Opinion»Brian John Spencer asks ‘Is there much difference between a 12 year old boy who writes to Queen and average adult Unionist or Nationalist?’
Social share: 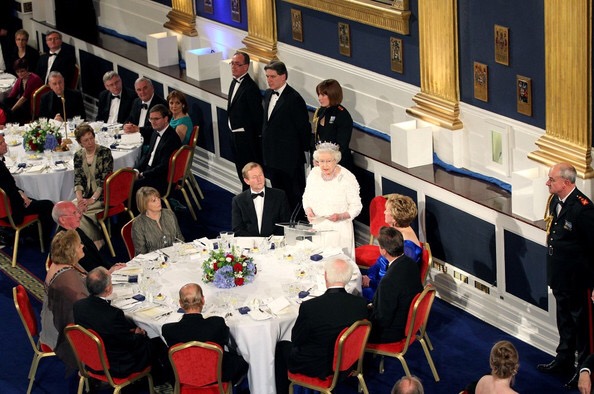 A twelve year old Dublin boy has asked Queen Elizabeth to return Northern Ireland to the Republic of Ireland.

This is the kind of blunt thinking, ignorance and simplistic logic to which I was exposed growing up. “We just want our land back,” a Mayo university friend would joke. I would watch news footage of Irish-Americans parading down Fifth Avenue, and I would be drowned in exasperation as their banner exclaimed, ‘England Out of Ireland‘.

Firstly, the young Reece Kilbride has asked the impossible. The sitting British monarch is a constitutional monarch, her role strictly non-political.

Secondly, Reece Kilbride may well reflect people’s thoughts. I doubt he himself has thought this. Perhaps he is articulating the teachings and feelings of his parents and teachers.

Conceivably Reece’s parents mirror the story of the Irish loyalist child, as told by George A. Birmingham in ‘The Red Hand of Ulster’ (1912):

“Gideon (son of Ebenezer McNeice) was taught, as soon as he could speak, to say, “No Pope, no Priest, no Surrender, Hurrah!” That was the first stage in his education.”

Is ‘No Queen, no Brits, hurrah‘ – the order of the day here?

The second stage in education is school, where, as Maureen Wall of UCD railed, young minds are “filled with toxic rubbish that passes for history.”

Thirdly, Reece Kilbride should be writing his letter to the everyday unionist men and women of Northern Ireland, for it is with them the decision lies – the principle of consent is the key plank of the Good Friday Agreement, as enshrined in Article 1 (ii).

Why hasn’t the principle of consent been taught to Reece? That power is with the people and not with the Monarch instead of being conceivably being taught the “boneheaded bogtrotters” argument of “Brits Out”, “give us our land back”; albeit, expressed with supreme courtesy.

Reece has given expression to the Irish republican’s fundamental misunderstanding of the Ulster question and the Unionist mindset, as Conor Cruise O’Brien wrote in 1972 in ‘The States of Ireland‘:

“Our school histories do not seriously discuss the ideas and politics of the men of 1916 in relation to the Protestants of Ulster.”

The stamina and endurance of the misunderstanding has been catastrophic.

Unionists and the pro-Union community are not deluded lackeys, they do not suffer an identity crisis or false consciousness as “fostered by an alien government”, as the Irish Proclamation erroneously proclaims.

Irish monarchists hold views as strong and legitimate as Irish republicans, and vice-versa, as guaranteed by international treaty.

John Hume expressed this emphatically in his famous 1964 article in the Irish Times:

“Another positive step towards easing community tensions and towards removing what bigotry exists among Catholics would be to recognize that the Protestant tradition in the North is as strong and as legitimate as their own…. We must be prepared to accept this and to realize that the fact that a man wishes Northern Ireland to remain part of the United Kingdom does not necessarily make him a bigot or a discriminator.”

For Reece Kilbride and Irish republicans, their fight is not with the Queen, or England, or the British apparatus in Northern Ireland. Their fight, through policy and debate, is with ordinary native Irish men and women in Northern Ireland who are pro-Union and pro-Monarchy.

Trevor Ringland spoke with IRA men in the Maze. The prisoners said they wanted to drive the British into the sea, but the the British in Ireland is more complicated than an armoured Saracen vehicle, as Trevor explained:

“I said ‘that’s me’. They said ‘we don’t mean you, Trevor’. So who do you mean? The English? Most of them are only here because of you. Buy me a pint and talk to me about it but don’t shoot me.”

There are many Irish people who are also British .They are part of the scaffolding of Irish life. They cannot be removed, their roots are deep, the bones of their forebears are in Irish turf.

When I say unionist people are Irish, I’m expressing my own personal view, and the traditional view, as Brian Walker wrote in 2008:

“One hundred years ago most unionists in Ireland, north and south, regarded themselves as Irish. Of course, most also saw themselves as British citizens and were very keen on ulinks to the Crown and to Great Britain.”

Finally, Reece and other people who fail to understand the Ulster question and unionist people, make two other mistakes.

Firstly, the British have been working for nearly a century to extricate and disengage itself from Ireland. As David McWilliams wrote:

“It is my view that the British were on their way out of Ireland from the mid-1860s. London was actively trying to disengage and promote the Home Rule movement.”

He continued, explaining that the stumbling block to Irish independence were the Irish themselves, Irish men and women from Ulster:

“The only flies in the ointment were apparently the Ulster Unionists…

This grand design – the gradual British pull-out – was going according to plan pretty well up to the time the Ulster Volunteers said no. Once the Ulster Covenant was signed and it became clear that the Ulstermen would fight, the notion of some sort of partition became a reality. This was what John Redmond feared most.”

The fight for Irish republicans is with fellow Irishmen, not Englishmen.

“This is the opportunity for Ulster to show that it places Empire above everything. If the little protestant community in the South, isolated in a turbulent sea of Sinn Feinism and Popery can trust their lives and their property to the majority there, surely the powerful community of the North might take that risk for the sake of the Empire in danger.”

“More and more evidence shows that well before 30 January 1972, the trend of British policy was to seek disengagement.”

“The paradox is that this discrimination was the result not of a British desire to hold on to Northern Ireland, but because of an unstated hope in London that Northern Ireland would one day somehow become part of an all-Ireland Republic.”

During the Home Rule crisis, while Ulstermen wanted Empire, it is clear London for the sake of Empire wanted Home Rule.

The tale of Britain in Ireland over the last century, has for nationalists, been of pain and calamity and wrenching heartache. Yet, the tale is not of premeditated and committed malevolence, but a tale of trying to deal with wildly passionate Irishmen of diametrically opposite aspirations.

Secondly, Irish republicans also misunderstand another aspect of the unionist mindset – deep mistrust of the English politician, bordering on an Anglophobia.

Ian Paisley said to a French journalist during the Ulster Worker’s Strike of 1974:

“We’re in the hands of our English masters. And we understand they are not our friends. They would like to destroy us. So that’s our only fear, but we’re not wandering about in fear of anybody.”

English writer V.S. Pritchett remembered his trip to Belfast in 1923:

“The Orangemen were contemptuous of the Southern Irish and had a blustering condescension to Englishmen like myself.”

So Reece, listen to your fellow Dubliner and Irish republican, Diarmaid Ferriter, who wrote:

“As Winston Churchill had written… from an imperial point of view there was nothing the British would have liked better than to see North and South joined together.”