You are at:Home»News & Current Affairs»Opinion»Twenty Years on by Patrick McKeating
Social share: 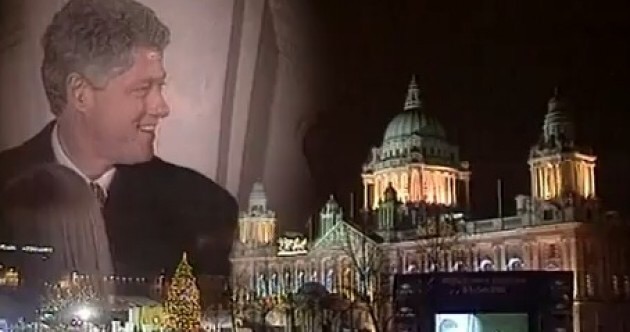 It was a day of firsts. The visit of President Clinton was the first time I heard the phrase ‘no stone unturned’. As 9 year olds we all had to write about the visit of the most powerful man in the world to our city. A boy named Christopher wrote that the CIA would ‘leave no stone unturned’ in searching the Europa hotel for explosives. I took it quite literally. It made no sense.
Rather more significantly this was the first time I felt part of history – of a striking event after which things wouldn’t be the same, of actually believing in a man who made a promise to challenge the past and change the future. Even as a nine year old I got the sense that the sprawling crowd on that cold November evening did too. It was different. Not the sudden ecstasy of a goal or the cold passion of a riot. Not a dejected crowd leaving Casement or a bored flock leaving mass. This felt permanent.

He told us that, “We will stand with those who take risks for peace. If you walk down this path continually, you will not walk alone.” We believed him. Who wouldn’t though? The man arrived in a jumbo jet. His jumbo jet.

We know how the story developed at home. Not an easy narrative but one that appears to have a happy ending in so much as history can. Let’s put it this way, Eamonn Mallie used to report from grim scenes of violence, retribution and false hope. Now he tweets about coffee and art.

Around the world there were faint whispers of peace too. President Yeltsin met with Clinton a stone’s throw from the famous Speakers Corner In Hyde Park weeks before. The Dayton Agreement gave hope to an end of war in the Balkans. The Oslo Accord secured recognition of each other by Israel and Palestine. Clinton told the House of Commons, “We can build a peaceful and undivided Europe.” It seemed that world leaders were becoming idealistic. It seemed that perhaps this was the future.

Yes we know what happened afterwards. We know how it all played out. We know about Omagh, the bombing of Serbia, Al Qaeda, the Coalition of the Willing and Islamic State. But isn’t it refreshing to reflect on a time when peace was sought using peaceful means? Even if that was just the case for a matter of months twenty years ago? I would end with Dickens’ famous beginning but surely that would be a little too much – even for this article.