You are at:Home»News & Current Affairs»Opinion»‘Solidarity and Resisting Terror’
Social share: 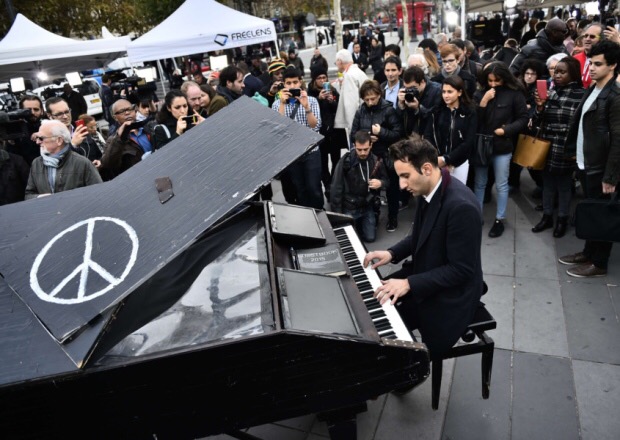 In one of the hundreds of op-eds written following the Paris attacks, the Guardian’s Lucy Mangan talks about the “need for silence” in the wake of tragedy. Silence is certainly a powerful place to begin. Anything other than silence on these occasions, often unintentionally, spirals out into something else.

The attack in Paris, like the one in Beirut, was politically motivated. It forced upon innocent people its political statement and demanded a political response. Regular people, simply living their lives and enjoying the weekend, were brutally politicised by masked thugs.

This demand for political response was almost carried along by the anger and fear, the emotional knee-jerk caused by such an atrocious act of depravity and violence. The event broke on to a million tiny screens and was broadcast in as scattered, chaotic and shockingly uncensored a way as it happened. When the conditions are set in this way, people then scramble to make sense of events, seizing upon the victims and planting them inside right or left-leaning political notions. The emotionally charged kick back turns the public into a riot of miniature preachers exclaiming their own versions of the ‘truth’ from sofa soapboxes. When opinion becomes currency, the facts and individuals become arbitrary.

It’s in this respect that victims become victims over and over again.

Individualism is lost, spun into the reductive meme-based fear-mongering of fearful and hate filled anti-immigration narratives or the sneering retort of moralising tragedy hipsters, whose accusatory whataboutery took aim at the ‘selective grief’ of those who seemed to not care equally about other atrocities. By this stage the intended aftermath is in full effect. Outrage and panic rule. Sensationalist headlines usually motivated by the financial ad incentive of click-worthiness are a catalyst for manufacturing sensationalist public responses.

Ceasing to have a human face or even a name, those that were gunned down are chewed up by pre-existing party agendas too. Whether it’s David Cameron’s Snooping Charter, building justification for military action or Trump’s argument for gun rights, their blood even greases the wheels of legislation and policy building. Here in the UK debates on shoot-to-kill,cyberwar and increasing funding for special forces are the rage. The winners at the stock markets are the intelligence consultancies and weapons manufacturers as the gears of the military industrial complex shudder to life. There’s profit to be made and ground to be gained. Politics and business are what they are, unapologetic.

The victims have simply become characters costumed for narrow, long-running narratives that prior to had reached no real progressive resolution.

It’s a horrible inclination prevalent here in Northern Ireland too. The victims of past atrocities are often reduced to political footballs or ignored entirely. We effect a similar kind of dehumanisation when we politicise the victims of The Troubles in this way, ceasing to treat them as fellow human beings already violated physically or psychologically by violence. We’re still learning how to move forward, it’s deeply important.

At the risk of almost quoting late American author David Foster Wallace, true freedom is about awareness and social conscience — not, by“default” knee-jerk, asserting that these events and people are about us and affirming our perspectives about the world.

The average citizen, who has no immediate control over policy or the mad media echo chamber, can choose what to pay attention to and how to process an atrocity. One alternative starting place is silence. At first, when grief is most raw, silence can communicate collective compassion, empathy and sympathy for real individuals who were drawn into this story without choice.

In her Guardian article, Mangan describes the grieving silence as “a unique form and expression of solidarity. We can all be silent, and it sounds the same from all of us, and yet everyone can put into it and take out of it whatever they want and need.”

What claiming solidarity does is it acknowledges the individuality of the victims. One extremely powerful Twitter project, already attempting to do this, is being run by Mashable. They’re publishing images of those that died in Paris with short personal blurbs that give us a glimpse of the life that was. Running through that feed one can’t help but shut up with the rhetoric. Profoundly victims are presented on their own terms — their jobs or passions. The effect of quiet scrolling is intimate common humanity.

We must recognise atrocities without allowing them to totally define those innocents caught up in them.

Because in this same way, there are faces and names in Lebanon, Syria, Iraq — across the world. Our common humanity with the Lebanese father, Adel Termos, who threw himself on a suicide bomber is as true, should we choose to recognise it. In another life, that dad may have been able to talk to my dad about fatherhood or football.

Like my dad, like me, like those gunned down in Paris, that Lebanese dad was a real human being with a name and ambition and hope for his children. His people, like those in the UK or France or anywhere, dance to music and love food and watch sport. People are as true to this in New York as they are in London, Paris, Beirut, Syria, Iraq and the world wide.

Music, food and sport — some of the things that bring humankind together. Yet terrorist assaults are about the destruction of that. The destruction of freedom, joy, community and culture with bullets and bombs.

Our freedom, joy and common unity is, therefore, defiance against the intended consequence of all terror — fear. In order to stay safe we cut ourselves off through censorship and paranoia. Suppression is how the terrorists score a victory and control people.

A French journalist, now also a widower and single parent, eloquently wrote to last Friday’s terrorists, “You would like me to be scared, for me to look at my fellow citizens with a suspicious eye, for me to sacrifice my liberty for my security. You have lost… Us two, my son and I, we will be stronger than every army in the world. I cannot waste any more time on you as I must go back to [my son]… he is going to eat his snack just like every other day, then we are going to play like every other day and all his life this little boy will be happy and free. Because you will never have his hatred either.”

It’s this that makes solidarity, with those that suffer, a political act. In a real way it is about defying terror, because the idea of the freedom we celebrate and aspire to is more powerful than all the black flags in Syria and Iraq. We are in solidarity with Muslims all over the Middle East because it was this idea of cultural freedom and democracy that inspired the civil resistance of the Arab Spring just as it did the democratic revolutions of European countries.

Our solidarity is with all those under the tyranny of Islamic State or Syrian dictatorship terror, whose aspirations for a freer society were thwarted at the beginning of the Syrian Civil War by criminals with pre-determined political ambitions.

So perhaps the most defiant and revolutionary response is not calling down hell fire or ranting that we should close borders. Maybe its choosing to live fearlessly and free, in solidarity with those that have suffered and will continue to suffer for just dreaming of it. To resist terror do what you’ve always done, eat together at restaurants, laugh together, shout for your team this weekend and listen to your favourite music loud so they hear it in Raqqa.