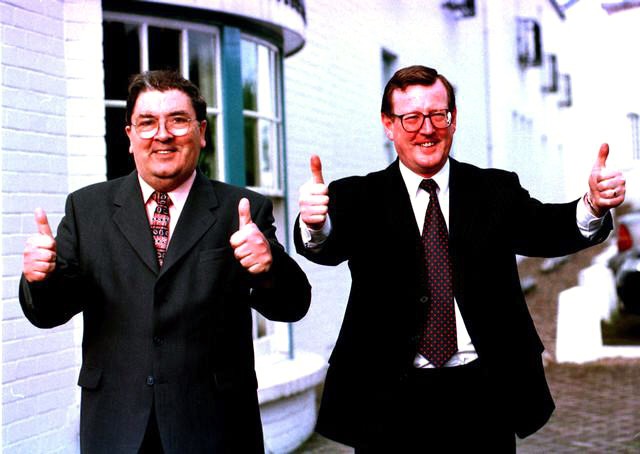 Debate was passionate. Speakers, from either side of the argument, delivered speeches ranging from reasoned argument to accusation and personal attack.Such was the nature of the engagement within the post-Good Friday Agreement UUP as the party in venues like the Waterfront Hall, Ulster Hall, King’s Hall and various hotels wrestled internally with issues of de-commissioning and the inclusion of Sinn Fein in the new administration at Stormont.

An antagonistic DUP heaped criticism on David Trimble and UUP members often had to run a gauntlet of taunts and hostility on entering the various venues where the UUP leader and his strategy often carried the day but never by a hugely comfortable margin of support and certainly not by nearly enough to silence the discord within and the loud accusations led from outside by the DUP.

Both of these, in addition to other factors like the actions and electoral success of Sinn Fein in constantly testing the ability of the UUP to keep its constituency supportive – the determination of British, Irish and US governments to shape the process, as required, to sustain its existence – suspensions of Stormont and ultimately the failure of the UUP in recognising sooner a need for change in leadership – eventually led to the emergence of the DUP as the lead voice of unionism.

Once in power and post St Andrews and Hillsborough and now in a role reversal within unionism about to make ‘A FRESH START’ the DUP is the party of unionism which is wedded to the belief that within the present structures at Stormont, enough has been created that is worthy of preservation.

Sinn Fein is clearly of the same view. In regard to the economy and economic challenges it displays an obvious conversion to realism for slow learners. Soon they may even begin to dismantle their Trojan horses.

However it seems premature to claim that the process is transformed. If this is the case someone needs to let all the participants know.

Within unionism it is now the UUP that snipes from the sidelines and has, for the moment, opted out of an Executive role. If it achieves the electoral success for which it hopes and anticipates in the elections for the new Assembly it is difficult to see how this will be sustained in the absence of a major review of the Assembly structures as envisaged in the Private Member’s Bill brought by Independent MLA John McCallister which could now fail in the light of the minimalist approach for institutional reform within the Fresh Start.

In spite of claims otherwise there has been an element of electioneering in the actions of the UUP. Unlike the party led by David Trimble it had at best a token seat at the Executive table but given its history in entering government without de-commissioning to create an Assembly and commit to devolution there is no logic to its failure to support calls for an adjournment of proceedings and threatening the process other than seeking to wrong-foot the DUP and gain electoral credibility within a unionist constituency that has grown weary of a tortuous process and perceives it as having delivered little dividend for unionism and weakening its imagined culture.

A promised alternative is to emerge. If this is not radical in vision and policy it may serve only to confirm the stance of the UUP as tactical rather than strategic, embraced merely to do what is right for the UUP rather than Northern Ireland.

Since the Trimble era the UUP has zigzagged its way through local politics veering a course from stronger connection to Westminster to graduated responses, pacts and now withdrawal from the Executive. Having started from a low base, it is in a better place in terms of representatives but a more compliant and organised membership allied to pragmatic and populist tactics rather than any perceptibly consistent ethical or progressive value base in socio-political and cultural issues have delivered only limited success.

Where risks or challenges are taken they seem tentative and serve only to display inherent contradictions. In the words of the leader the UUP may not merely be on the ‘wrong side of history’ but morally and ethically distant from many voters and non-voters especially of a younger variety.

Recent Opinion Polls suggest a personal popularity bounce for Mike Nesbitt MLA but it is likely and hard not to conclude that this lies within a constituency within unionism concerned by DUP concessions to Sinn Fein. Some of these voters probably switched to the DUP during the Trimble and immediate post-Trimble era. They will view the DUP as being where the UUP used to be. There are parallels but this is only partially accurate.

The UUP cannot muster the loud protests of a Paisley era DUP and is not attacking a party as deeply riven. With a few exceptions the DUP has managed disquiet more effectively. Peter Robinson has stayed long enough to steady the DUP ship and whilst not quite walking the gangplank has departed the scene and left enough time for the party to repair the damage and disquiet which was emerging before testing its perceived constituency in an election.

There will be sighs of relief amidst the fond farewells.

Unionism is rightly concerned and tested when the activities and will of para-militarism assumes greater significance than democracy and this strains the credibility of the institutions for reasons which are readily apparent. Having failed to achieve an adjournment in politics the DUP resorted to damage limitation and an in-out policy indicative of its pragmatism and desire to retain the institutions regardless of flaws and Sinn Fein’s currently benign connections to its war pedigree.

Aided by sovereign governments anxious to be rid of the problem it now claims a ‘fresh start’ and speaks of transformation. If this is the case then you have to be concerned as to how bad things really were. Spin as they might, the issues which are not addressed speak volumes for the depth of the transformation. This fresh start is little more than a limited agreement designed to keep the show on the road. Betrayed by its moral emptiness and lack of reconciled differences on contentious issues it may yet offer potential.

When the UUP was the biggest party in the Assembly there was a view that unionism needed the Assembly more than Sinn Fein. The present policies and actions of Sinn Fein suggest that this is not the case.

Recent polls, admittedly time bound, show that militant and aggressive republicanism have only a limited appeal and is not delivering its goal.

Economics and the success of the just delivery of civil rights by mainly catholic activism presents republicanism with a challenge that can only be addressed within the political arena and is damaged, not enhanced, by connections to death on the streets. Inequality now framed only in sectarian terms and in terms of a national struggle is divorced from reality.

This may be taking place. Sinn Fein has had to digest an uncomfortable pill over welfare. Language and vocabulary show signs of a willingness to make Northern Ireland work for all.

It is to be hoped that this is genuine and not an expedient response to an outcry of critique and disapproval within civic society. It is the former that will display the truth of a fresh start and transformation in our politics.

It is opportune to claim both. It could be an indication of a new realism within the two bigger parties. It could be indicative of a recognition that if we are to resolve our many problems and issues then we need to find a better way of working together and build on our common interests to address and our differences. It could be an admission that as a result of our historical circumstances there has been a lack of reconciliation and sensitivity within the peace process and that this has been its inherent contradiction.

Had it been an all- party agreement rather than an arrangement between two power blocs, we might have more reason to feel encouraged. But this is the challenge for the other parties and in their response they too have an opportunity. Northern Ireland is transforming perhaps more than the politicians realise and many, within the community, tired of old quarrels and labels, have already made a fresh start.

Politics that brings expression to this change will have much to gain and much to offer.