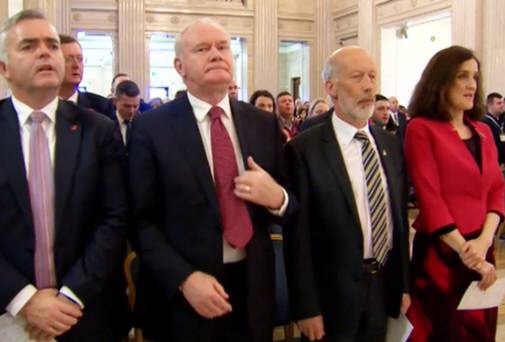 In a recent article Brian Spencer makes a number of observations about this “loutish Calvinist“.

I am grateful that Eamonn has allowed this “rural unionist oaf” a right of reply.Clearly Brian believes that my faith and my rural roots are matters which deserve public comment.

I am disappointed that Brian doesn’t mention the elements of my background which motivated my actions on Wednesday because my childhood, and specifically one day in my childhood, where what I was thinking of when I acted as I did.

In November 1987, a few days after I turned five, my father brought my sister and I to Enniskillen to view the site of an IRA bomb which had detonated the previous day on Remembrance Sunday.

As we viewed the devastation beyond the police cordon Daddy told us never to forget what had taken place there and the people who were responsible for it.

The Sunday after the bombing my father spoke at a service in a church (a Calvinistic, Free Presbyterian Church as it happens) about the bombing. I listened to a recording of what he said before writing this article.

He recalled that the pervious Sunday the door of the Sunday schoolroom in which he was teaching was knocked and he emerged to find a gentleman from the Free Presbyterian Church in Enniskillen who advised him that there had been a bomb and his sister was involved. When asked how bad it was he shook his head and said, “It’s very bad”.

He told him that while my uncle had been recused from the rubble my aunt was completely buried.

My father then asked if she was dead. The reply was, “We don’t know”.

Dad, my grandfather and another aunt left church and headed to the Erne Hospital where, after waiting for an hour among the horrific sights of the aftermath of the explosion, they discovered that Aunty Daphne was alive.

A few days later, while calling to visit Uncle Alan and Aunty Daphne, Dad telling in the recording of meeting Richard Needham, a Minister in the Northern Ireland Office. Moments before he met Daddy Needham had stood in the ward and made a speech to the injured on how the government would ensure those responsible were brought to justice.

Even back then, so soon after the bombing, my father was sceptical to say the least – a sentiment which he expressed to Mr (now Sir) Needham rather vocally.

28 years later and with still not a single arrest, never mind a conviction, for the Enniskillen Bombing it would appear that his attitude to Needham’s speech was justified.

While my aunt survived the bombing she still carries the scars, physical and mental.

When I spoke to her earlier this week she told me that the Remembrance Sunday Bombing was not something that happened 28 years ago but something she lives with every day.

When I wear my Poppy I don’t think of the Somme where a family member paid the supreme sacrifice or the battle field in France (I don’t know which) where another was injured.

When I wear my Poppy I don’t think of the deserts of North Africa where a family member was decorated for his services with the Desert Rats.

When I wear my Poppy I think of Enniskillen.

That’s not a choice I made.

That’s a choice which the IRA made when they bombed a Remembrance service.

As I stood in the Great Hall on Wednesday, therefore, I was thinking of Enniskillen. Frankly, I never think of anything else during the the two minute silence which I’ve always observed for as long as I can remember.

I couldn’t. Why? Because I don’t have any earthly idea who Mitchel McLaughlin was remembering but I’m quite sure it wasn’t the victims of Enniskillen.

For me it would have been rank hypocrisy to repeat those words after McLaughlin, the man who said the murder of a mother of 10 wasn’t a crime.

I didn’t know that the National Anthem was to be excluded from the order of service. At all the previous events I had attended at Stormont it had been included and I only learned of its absence when I was handed an order of service around 10:40am on Wednesday morning. Between then and the close of the act of Remembrance I made the decision that I was going to sing it anyway.

Why? Because I believed that the only reason for its exclusion was the presence of Sinn Fein/IRA members. The presence of members of an organisation which continue to justify and defend the 1987 bombing of a Remembrance Service.

What I did last Wednesday was not, as Mike Nesbitt claimed and others have repeated, a stunt. If it was a stunt to promote my party it was a foolish one because I will not be a candidate in the upcoming Assembly election.

TUV has a number of passes to get into Parliament Buildings. Surely, from a TUV point of view, it would have made sense to use one of them to get someone to do it who will stand at the next election.

Surely it would have made more sense to get someone who had, unlike myself, experience of doing live TV interviews and experience of dealing with calls on a phone-in.

If it was a stunt why wasn’t Jim Allister in Stormont on Wednesday rather than in Ballymena?

I’ve also been accused by Mr Nesbitt of “ambushing” people because people only agree to attend things if they know what will be on the order of service. On the basis of that information they can then, Mr Nesbitt says, make a choice as to whether to attend or not.

Ambushing someone, according to the dictionary, means “to launch a sudden attack from a place of concealment.” I have never ambushed any one.

Can Martin McGuinness say the same?

I didn’t know what was included or excluded from the order of service before attending. How, in Mr Nesbitt’s mind, therefore was I supposed to make my judgement as to whether or not I should attend?

Frankly, I was distinctly uncomfortable on Wednesday throughout the service because of the stench of hypocrisy.

So when it came to the end of the service I took a deep breath and (being a “loutish Calvinist”) said a prayer. I then started to sing the National Anthem.

Because I didn’t see why the National Anthem – which had been sung at every Remembrance Service I’ve attended at Stormont in the past – should be excluded at the behest of those who blew up people for the crime of remembering in 1987.