You are at:Home»News & Current Affairs»Opinion»Lots of Bombs and Lots of Loughs
Social share: 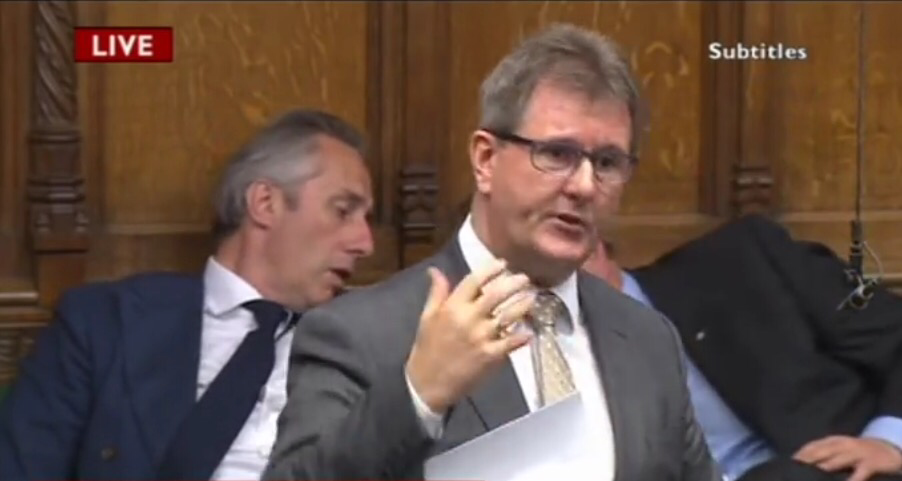 “Gee, I wish we had one of them doomsday machines.”
General “Buck” Turgidson, Dr. Strangelove

DUP MP Jeffrey Donaldson opened his mouth in Westminster on Wednesday and said:

“With support for the Union in Northern Ireland growing ever stronger, may I help to assuage the concerns of the Right Honourable Member for Moray by saying that we have lots of loughs and lots of ports, and that if the government ever need a new home for Trident, Ulster is there.”

These foolhardy words were uttered during a debate about the UK’s Trident Nuclear missile programme. The Prime Minister broke a smile in acknowledgement but Donaldson, in a later interview, insisted that he wasn’t joking about the province guarding the nuclear nest egg.

The immediate backlash to the comments was outrage – naturally. Who wants WMDs in the background of their Belfast lough selfies? There are some scenes an Instagram filter can’t improve, weapons for mass murder is one of them. On Tuesday, in a poll by the Belfast Telegraph, 68% of people disagreed with the notion that we should look after Trident. Ulster clearly isn’t ‘there’.

On the political scene, however, the SDLP and the Green Party were quickest in clarifying their positions. Green Party Leader Steven Agnew and his party members even going so far as to call the comments by Donaldson “reckless” and “arrogant”.

Agnew is right. The caustic little quip at the SNP was nothing but a colour display. The brittle trust necessary to Stormont’s running has not been easily achieved and brash or silly outbursts become worthy of panic.

Among the fundamental pre-ceasefire agreements and documents that brought peace to Northern Ireland, one of the most important involved the Joint Declaration on Peace, known as the Downing Street Declaration, in which the Irish Taoiseach Albert Reynolds and British Prime Minister John Major committed to earnest cooperation in moving forward.

In it, the British government declared “no selfish strategic or economic interest in Northern Ireland” in order to achieve “peace, stability and reconciliation established by agreement among all the people to inhabit the island”.

At the time the DUP’s fiery Ian Paisley viewed it as a conspiratorial sell-out to “bring about the sole and sovereign authority of a Dublin Government over us”.

The progressive language and tone set by the declaration was echoed in the 1995 Framework documents and still form an important foundational cornerstone to today’s peace and institutional set-up. The basis for consensus, paralysing as it can be at times, is supposed to protect the representation of all communities and constantly needs to be reinforced.

Donaldson’s fleeting cheap shot commandeered the opinion of the entire Northern Irish population, disrespecting any consensus. Further to that, the imprudent remarks disregard the very principles of consensus, only serving to erode trust and play entirely into any paranoias about the integrity and democratic commitment of those at Stormont. It’s offensive and embarrassing. No public debate or political consultation.

Even if Trident were ever to reside in Northern Ireland it would result in a back-tracking on that original Declaration in a basic and powerful way. Such a move could dangerously be perceived as renewed strategic interest on the part of Britain in Northern Ireland, seismically damaging our fragile peace by undermining it’s tentatively laid building blocks – and who knows where that would lead. Donaldson’s comments were a casual and pointless invitation to the British government to renege on that commitment.

That said, while Donaldson may actually dream at night of looking after rusting nuclear submarines in exchange for a pat on the back from Westminster, I doubt Number 10 will take him any more seriously than the Northern Irish populace.

Social share:
Jeffrey Donaldson Trident Union Unionism
Previous ArticleSinn Fein and Welfare reform – economic realism for slow learners by Terry Wright
Next Article Does anyone think ‘national security’ interests including use of collusion would be tolerated by the families of the French people killed in Paris? – Asks Mark Thompson of RFJ