You are at:Home»News & Current Affairs»Opinion»‘Jim Allister, keep your divisive politics out of Ulster Rugby’ – By Brian John Spencer
Social share: 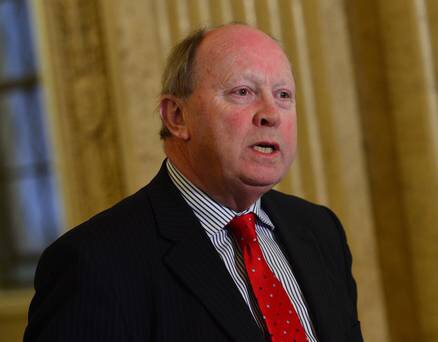 Ulster Rugby doesn’t do identity or politics. CEO Shane Logan has the mouths of the players and he has them bridled shut.

Ulster Rugby is part of the proverbial fifth province. The place where the moderate and the bipartisan reside silently and in parallel to the world of flags and parades, free from sectarianism and Troubles baggage. For Ulster rugby and the support fraternity the linguistic cantour matches the landscape of fact, a post-sectarian Northern Ireland.

In a province where sectarianism and tribalism are pushed to the foreground by the authoritarian creedists, Ulster Rugby is the silent man.

The Ulster rugby family is cryptic on the Northern Irish question, but of course all of middle Northern Ireland is cryptic. We interact with one-another with a veneer of politeness that is underlaid by a high tribal voltage. Politics may not be expressed, but identity politics is thought.

Ulster doesn’t have a player like the free running, free speaking Australian David Pocock. I’m not talking about his physique and poaching, I’m talking about his unfettered political views and social activism. The openside flanker is a well known environmentalist and an outspoken agitator for gay marriage.

Ulster Rugby isn’t free of politics. It just stays free from the Ulster politics of Orange and Green. Their politics may be thought but they remain unsaid. Engagement with Ulster politics is toxic for any corporate entity, a risk to the person too.

We don’t know Ulster Rugby politics but we can guess them. Ulster old boys give us an indication, alumni like Ray Davey, Jack Kyle, Trevor Ringland, Tyrone Howe and Stephen Ferris.

In the 1960s Jack Kyle in a courageous and rare act of defiance spoke out against the malignant rhetoric of Ian Paisley. Ray Davey founded Corrymeela peace centre, said to be the Alliance Party at prayer. Ringland and Howe graduated from the white jersey of Ulster into the pressed white shirt of the Ulster Unionist Party. Stephen Ferris grew up in Maghaberry building bonfires for the Eleventh Night.

Jack Kyle strongly opposed Paisley and championed “toleration and regard between Catholic and Protestant”. The celebrated Ulster rugby player and Irish international wrote in 1966 in a letter to the Irish Times decrying Paisleyism:

“[We have to] counteract the creed of those who believe they have a monopoly on the Christian religion, and that nothing good can come from anything or anyone outside of their own narrow-minded and prejudiced ideas. What a pity the misdirected energies of Mr Paisley and his followers couldn’t be used to build, like these people, instead of to destroy.”

“Do Mr Paisley and his followers really believe that the building off barriers between Catholic and Protestant and the formation of a religious apartheid is for the good of the province?”

And he finished by saying, reiterating the enforced silence of the fifth province:

“Freedom of thought, word and deed; so long as you think, speak and act according to the rules of the man [Ian Paisley] who formed his own ‘Free Church’.”

British and Irish Lion Tyrone Howe was well known for his liberal politics and for his frustration with petty squabbles and sectarian quarrels on Banbridge Council. Trevor Ringland is a byword for liberal unionism, winning renown for his exit from the UUP after Tom Elliot refused to attend a GAA game. While Stephen Ferris built bonfires his politics are unspecified, but hint towards agnosticism.

Ulster Rugby has always been a healthy step away from Ulster politics. As Jack Kyle said, “There was never any religious business about rugby. That was the wonderful thing about it.”

Against this unspoken rule the Paisley general, Jim Allister and unremitting partisan, recently veered into the fifth province and made political capital out of the apolitical Ulster Rugby.

The TUV leader slammed the Kingspan administration for failing to ornament the Ulster jersey with a poppy for the Remembrance Sunday fixture against Cardiff in Cardiff, an act he denounced as a “calculated snub”.

Like his Calvinist press officer this act was loutish and vulgar.

The unreconstructed Paisleyite’s shrill intervention was entirely retrograde, outrageously out of place, unwarranted and unwanted. It was wrong, conceited, and above all, a blazing contradiction.

Jim categorically fails to understand the special ethos, philosophy, spirit and generosity that exist in rugby in Ulster and Ireland. His Paisleyite hooting was a jarring mismatch to the landscape of fact of Ulster Rugby.

The players were acutely aware of how Jim Allister made their club a matter of megaphone partisanship. I’m sure they were outraged and in disagreement with the North Antrim MLA. Yet not a word was said by any of the players anywhere. Silence across Twitter. Irish rugby doesn’t have voluble controversialists like James McClean or Conor McGregor or even David Pocock.

The CEO has enforced a polite suburban silence at Kingspan.

There was an official statement released by Ulster Rugby; dry, formulaic and scrupulously legalistic.

This statement alone should have made laughter out of Jim Allister’s distasteful intervention. As the statement outlined, all those English teams who also played on the Sunday also played like Ulster without a poppy. Further to that, Ulster has a permanent war memorial which is placed centre stage at the Kingspan stadium. The bottom line is, Ulster Rugby held a solemn and dignified Remembrance service that marked those who served and made the sacrifice.

Jim’s press officer has made it clear that he does not support the Ireland rugby team, and we can only presume the Paisley’s former general is the same. This represents a fringe and fanatical viewpoint which is unheard of among the Ulster Rugby community. Jim also recently pilloried aspects of the all-Ireland bid for the Rugby World Cup.

Ulster Rugby and the rugby fraternity in Ulster do not want a Paisleyite hooter and heckler meddling with the special and unique status of rugby in this province and on this Island. Ex-international Trevor Ringland said:

“While the rest of Ireland was tearing itself apart, rugby was doing it right. It’s a different way to do politics, in which nobody dies.”

“That was the thing about playing with the northern boys we transcended politics. It didn’t take too long for me to reconcile my Republican heritage with the diverse political and religious backgrounds of my team mates. There was no border in the dressing room.”

Ulster and Irish rugby are a special and precious thing, something that needs to be guarded and something from which we must learn.

We can also learn a lesson from this episode. As Jack Kyle said, for protestants free speech was only for Paisleyites during the Troubles. Times have changed and the creed-crazed zealots can and need to be repudiated. Furthermore, the players of Ulster Rugby could learn from McClean and McGregor and Pocock. If we want to change Northern Ireland we need the men of balance and fairness, as typified by Ulster Rugby, to come out and stand forcefully for their eminent and emancipatory qualities of civility, equality, moderation and toleration.