You are at:Home»News & Current Affairs»Opinion»Billy Hutchinson – a British Loyalist in Dublin
Social share: 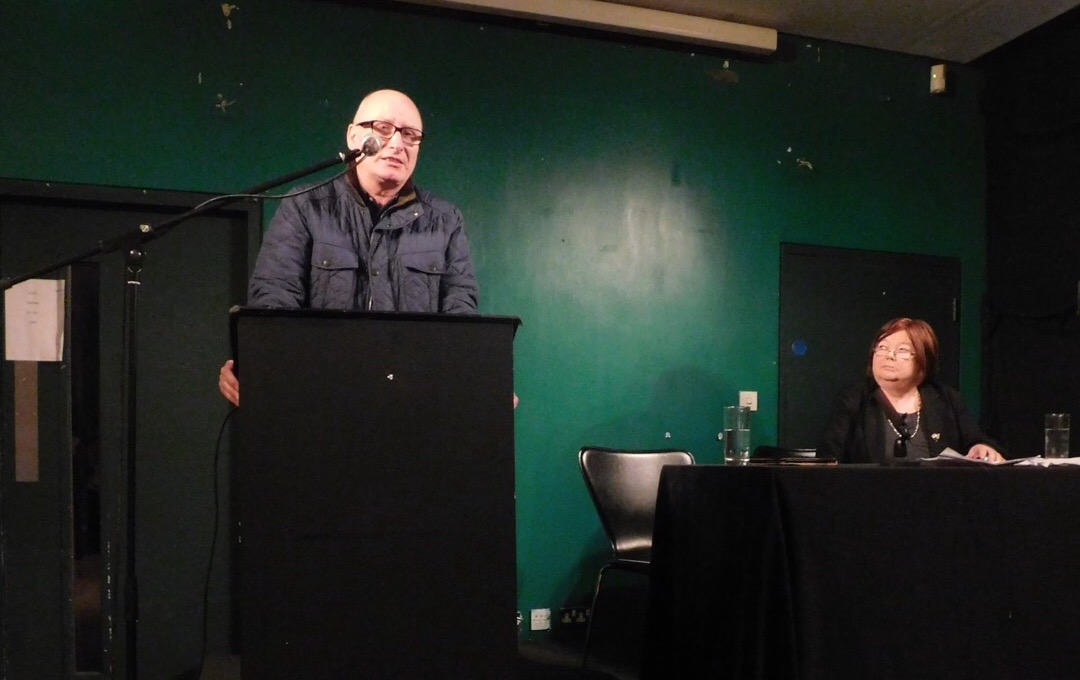 I’ve felt green of late. Not a political conversion, rather, the green of envy.

Jealous of the energy, vision and action of the Irish unity lobby. The unionist caucus by contrast is inert and anaemic. Unionism is now the politics of Ourselves Alone, endlessly playing the grievance card.

Unionism is reclusive. Unionists exhibit the traits of a barbed introvert. In many aspects the pro-Union mind in Ireland is agrophobic. Unionism might hold long time adherents with this conduct, but it won’t win new subscribers with it.

Breaking this unionist habit the leader of the Progressive Unionist Party Billy Hutchinson made a trip to the Irish capital to speak at Liberty Hall to an audience of Irish nationalists and republicans. His address looked at how the loyalist community view the Republic of Ireland. This was the first in a series of lunchtime public talks, ‘Our Friends From Belfast‘, organised by trade unionists, community and peace workers from Dublin

The purpose of the series is to break stereotypes, increase an understanding of one another, and to build relationships. The chair reminded us that Irish loyalists are “almost unknown” in the south. And then some humour: Billy Hutchinson comes from a mixed marriage, one between a socialist and unionist.

Billy began by looking at the 50th anniversary of the Easter Rising. 1966 was the year of the Malvern Street murder; the year of the Lemass-O’Neill summit; and the year of fierce Paisleyite backlash to reform.

“The thing I remember was smuggling.” In Billy’s childhood everyone had a “Free State lighter”. A metal contraption with a fabric wick.

As a child Billy remembered O’Connell Street, but not much else about the south. As a returning adult he expected a hyper-gaelicised used city. “I expected it was going to be fiddly-dee music.” His understanding of Dublin was way off, he confessed.

“Dublin was so American. I couldn’t believe it. It was Coca Cola culture. U2 were described as an Irish band but they were inspired by America. It would have been hard to find a fiddly-dee bar. American influence was all around the world.”

With the ceasefires and accompanying dialogue with TDs from the south, the tensions began to defrost. But he reminded the room of the starting point and the mindset with which the peace makers had to work.

“It was just thought by loyalists that Dublin supported the IRA.”

Billy’s understanding of Ireland was helped by a chance and inauspicious meeting with a lady in Cork. He retold the story of how hearing his Northern accent the Cork cashier asked if he was Dundalk. He corrected the lady and said he was from Northern Ireland, to which she responded that she thought Dundalk was part of the North. This told him that it wasn’t a matter of the south being collectively hostile and against the North, but that many people were indifferent and oblivious to the state of affairs.

“It was funny but refreshing. Not everybody from the South knows and cares about the North. It’s the same for Northern prods. It was a lesson I learnt very quickly. I was told the Cork and Kerry mountains was IRA territory.”

Billy then stated his avowed constitutional allegiance: “I am British and my political ties are to England.”

The former combatant called for the continued construction of relationships, personal, political and economic. And not just North-South but East-West also. “There are a lot of similarities between the North and South and the more cooperation the better.” He continued:

“We may be two nations but we are one island. It’s a bit like Belgium and France, we should cooperate.”

Billy moved to take questions from the audience which added insight and context to the loyalist viewpoint of the South.

Asked about a potential Brexit Hutchinson said he opposed it. For reasons of trade principally, for which Ireland and Britain are deeply and critically tied. It would also trouble the issue of the border.

Asked about the spectre of Scottish independence Billy responded that the referendum of September 2014 was resounding, settling the matter. This line rings of the corpulent complacency of leading unionism in Northern Ireland. The SNP represents a formidable challenge to the constitutional status quo, a challenge that requires the display and deployment of every bit as much energy and enthusiasm from the pro-Union lobby.

Asked why Northern protestants would want to stay with a county that is becoming an increasingly difficult in which to live, Hutchinson said that Great Britain is not unique in confronting the troublesome issues of migration and integration, these are EU wide. He took this moment to reaffirm and reiterate his ties to England. Expressed by his love for cricket and rugby league, making Yorkshire and Leeds a regular destination.

Asked if it was time to drop the designated titles unionist and republican Hutchinson said Northern society is not ready for it, nor are the parties who have engineered “institutionalised sectarianism” in the Assembly.

Asked about racism and a racist event loyalists were tied to Hutchinson said:

“The message is we don’t want to get rid of sectarianism and replace it with racism, and we have been using World War Two to explain how different people come here. Racism has no place in Northern Ireland society.”

The loyalist leader reminded his seating audience that the south has a bad history of discrimination and racism towards the traveller community.

Asked about the GAA Hutchinson said he admired the institution and what it has achieved on a social and cultural level. For him it is a model that needs to be applied to Irish League Football. However on loyalists playing GAA it was a firm no. He explained that the Troubles saw republicans take ownership of everything that was Irish, from the language to Irish dancing.

“The GAA is Irish so it is seen as republican, and so it gets lumped in with everything that happened during the Troubles.”

Billy Hutchinson closed the discussion by restating the many similarities that exist between Britain and Ireland. “Driving around Dublin it’s like Leeds. It’s all English architecture. The links between Dublin and London are stronger than ever.”

People rightfully continue to mourn the loss of David Ervine. Many lament and decry the absence of leadership within loyalism. This talk was only a minor act, but in symbol and example it is large.

Our only fate is what we make for ourselves. Loyalism can continue to ask for help or it can choose to help itself. Please may we see more positivity and courageous activity like this.