You are at:Home»News & Current Affairs»Opinion»Why does murder by the State seem fine to Theresa Villiers? – asks John Loughran
Social share: 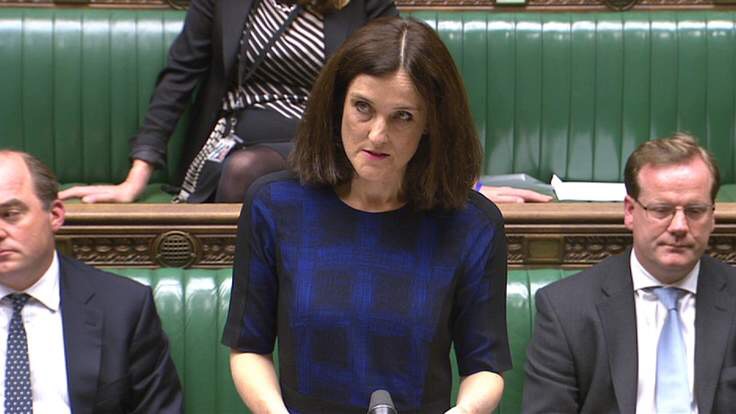 At the weekend I read Theresa Villiers’s oral statement to the British House of Commons on Tuesday. Presenting her assessment of ‘the structure role, and purpose of paramilitary groups in Northern Ireland’ she highlighted that “there are still serious legacy issues that need to be addressed”. On the need to engage seriously with legacy issues there is little political disagreement but there is a clear disagreement by what comprises ‘legacy issues’.

So notwithstanding the content of the report (which has been discussed widely) the oral statement of Ms Villiers on behalf of the British government is of itself worthy of comment. The statement gave an insight into the thinking that shapes the British conflict narrative which has been was constructed to simply reassert an untenable, misleading and factually incorrect assessment that the state was neutral and independent in the North of Ireland over a 40 year period.

Core to her narrow construction of legacy is an understanding that the British state seeks to absolve itself for its conflict actions and policies. Indeed there is emerging state ‘revisionism’ that is itself a barrier to engaging honestly with legacy issues. It is this thinking that represents a grave threat to the implementation of the Stormont House Agreement legacy mechanism – as it seeks to predetermine any outcome.

This ‘revisionism’ is not new. Its most recent outing was at the 2015 Conservative party conference when Ms Villiers said her government would “never accept any attempt to re-write history or legitimise the actions of those who pursued their aims by the bullet or the bomb”. This mirrors a similar speech at the British Irish Association in 2013 when she made reference, to “those who believe that the security forces operated outside the law”. In Ms Villiers public statements it is quite obvious that she is blind to the impact of British state conflict actions and policies over the last 40 years. More concerning it is pretty hard to find any coherent reference in any of her public statements that acknowledges the conflict status of the British state.

And this is after the indisputable evidence of the practice and policy of collusion as outlined in the Stevens Report, De Silva and the direct state killings on Bloody Sunday, Ballymurphy, Springhill and the New Lodge. Seriously? Why, no acknowledgment, recognition or taking responsibility for British state conflict actions? Indeed such omissions themselves raise questions about the intention and motivation of the British state to honouring its legacy obligations.

As disturbingly Ms Villiers’s oral statement reaffirmed the hierarchy of victimhood as she stated that: “the thoughts of the House should be with all those who suffered directly at the hands of paramilitary organisations”. I get that and I respect that sentiment. What I do not get is the lack of reference or acknowledgment of the grief, loss and injury of all those who suffered at the hands of British state forces. Furthermore in attributing responsibility “for over 3,000 murders” to paramilitary groups she omits the countless hundreds killed directly by the British army, hundreds more killed by the practice of collusion and those tortured. This is just insulting. It does indeed require clarification from Ms Villiers as to her provocative intent?

Of course Republicans and Loyalists have fundamental questions to answer and have a duty to assist victims. But this does not absolve the British (and indeed Irish) state from taking responsibility for their conflict actions, practices and policies. Ms Villiers invoking a national security veto is one way of restricting any investigation of state culpability in the conflict. This prompted the Committee on the Administration of Justice to highlight that “deliberately vague and undefined grounds of ‘national security’ in effect can mean whatever she wants it to mean.” (23 September, 2015)

This ‘national security’ veto outlined by Ms Villiers also seems at odds with commentary from PSNI Chief Constable George Hamilton made in the aftermath of the RTE Collusion documentary. He said he would hand over the police “vault” of information on conflict killings to an independent body investigating the past. The Chief Constable was significantly more rounded stating: “I don’t think we should be exempt from scrutiny from investigation in the police service, past or present. I think that’s good… but I actually think other people have stories to tell and questions to answer.”

Furthermore Ms Villiers’s approach that engaged the PSNI and MI5 in common enterprise to compile this recent report unquestionably put politics and unresolved legacy questions back at the core of policing. This is not where this society need to be: this approach has rolled back two years of progress to when the NIO and PSNI were in the High Court to challenge a democratic decision by the DCAL Minister Carál Ní Chuilín who released historic papers. This approach has also raised confidence issues in the motive and intent of the PSNI.

This wreckless approach to legacy from Ms Villiers fundamentally seeks to alter the core principle of independence that was agreed in the Stormont House Agreement. Her sleight of hand reflects a deep concern to protect the practices and policies of the British state to public and international scrutiny while it also speaks to a panic about what the information in PSNI ‘vaults’ may contain. Arguably Ms Villiers’s approach now makes it extremely difficult and puts pressure on the PSNI Chief Constable George Hamilton not to open the archive and information ‘vault’. No doubt his best efforts to take the past out of policing will be tested in the period ahead. There is now ample evidence that Ms Villiers restricted understanding of the legacy issues is a cynical attempt to determine the outcome of any wider legacy processes. It is that plain and simple!

So what wasn’t included in the Secretary of State’s oral statement?

Clearly there was no recognition of the loss of those killed by the British state. On Thursday night I was at a legacy information event hosted by Relatives for Justice, a group which works to support families bereaved in the conflict. Contributor after contributor recounted stories of loss and bereavement. Many raised questions of the British state and the intelligence agencies in the act of death, cover up or failure to investigate killings. Indeed it is not only a serious concern that the loss of these families has yet to be acknowledged but more disturbingly the same agencies (implicated in deaths) are presented as ‘independent’.

So as you can see it is hardly credible and indeed could be understood as offensive by families bereaved by the British state, when she unconditionally “thanks in large part the efforts of the police and our armed forces” for ensuring that the “the future of Northern Ireland will only ever be determined by democracy and consent” while not acknowledging their loss alongside those killed as she describes “by hands of paramilitary organisations”. That is not to question the integrity or motivation of individuals of all police or army but it does raise significant questions when there is no recognition of the corporate role in conflict.

By Thursday evening Ms Villiers’s oral statement was directly challenged by the Director of Public Prosecutions. He was initiating an investigation into the activities of Stakeknife. The actions of this agent provide a clear lens into British government’s ‘dirty war’ policy and the corporate role of the agencies charged with directing his actions. This ‘dirty war’ policy engaged, supported and directed agents and informers who proceeded to play human chess with the lives of so many in pursuit of joint political and military objectives.

So the DPP will now investigate the same state agencies that ran agents, were involved in state killings that Ms Villiers praised just 48 hours earlier. Of equal significance they were from the same agencies that provided information into this paramilitary report.

This will require Ms Villiers and the British government to fulfil their legal obligations to facilitate the right to truth to families. It will require an end to the use of the national security veto. It will require an admission that “there has been virtual impunity for the state actors” as described by the Council of Europe’s Commissioner for Human Rights Nils Muiznieks. It will require much more honesty and a step change from the tone and context of Ms Villiers’s past legacy statements. Only time will tell.