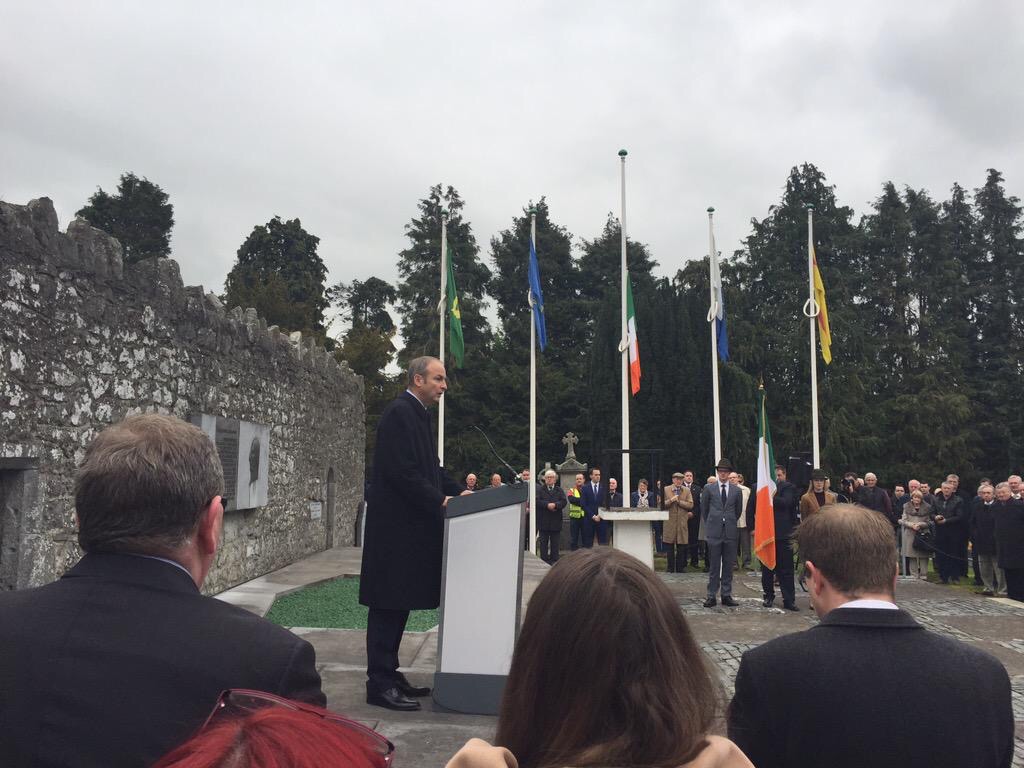 On Sunday (October 18 2015) the leader of Fianna Fáil Micheál Martin addressed the Annual Wolfe Tone Commemoration in Bodenstown. I previously looked at the Arbour Hill Address given by Micheál Martin in April 2015, the annual oration which marks the lives of the 14 executed leaders of the 1916 Rising.

This latest speech was for a Northern protestant once again fascinating. “Provisional Sinn Fein” is hegemonic in the north. It is the authentic and infallible representative of Irish republicanism in the six county geography. Criticism comes almost only from unionism. Not a one party state but a state with one “republican” party. With that comes concomitant deficiencies.

Turn South and suddenly an array of criticisms and counter-narratives are deployed against the ascendant republican party.

The Bodenstown oration was combative. Challenging the incumbent administration Micheál Martin rubbished their budget and record, and set his party out Fianna Fáil as the responsible alternative.

The Cork man also set Fianna Fáil out as real and rigourous republicans, dismissing Sinn Fein as unconnected to the men and women of 1916, a “mafia-like organisation” that “dishonoured the Republic.” He said:

“The party which today uses the name Sinn Fein has no right to claim that it represents the men and women of 1916. Founded less than 50 years ago, the Provisional movement waged a campaign in the face of the overwhelming and constantly reaffirmed opposition of the Irish people. It used methods which dishonoured the Republic and its first loyalty has always been to its own and not the Irish people.

Gerry Adams’s statement last month that Provisional Sinn Fein is “the only republican movement in this island” shows how these people think. Theirs is not the ideology of 1798 and 1916 – it is a mafia-like organisation which is incapable of respecting anyone outside of its own ranks.

How dare they claim to own Irish republicanism. No organisation which fails to expose child abusers, racketeers and murderers can call itself republican.

And let’s not forget that last month they also said that they could guarantee that the Provisional IRA didn’t exist because they know everything that happens in republican communities in the North.”

At Arbour Hill Martin said Sinn Fein are “not republican.”

The Fianna Fáil leader swatted the lethargy of the Kenny-Cameron stewardship of the peace process, and raked his studs into the torso of Sinn Fein for bad faith and sectarianism in northern politics. He said:

“For all of its posturing about building bridges, Sinn Fein has increasingly been playing a sectarian card to try and build its support.

One of its Ministers was held by the High Court to have made a major appointment in a sectarian way. This year one of its most senior politicians actually put up posters telling people to vote Sinn Fein to get one over on the Protestants.

Gerry Adams himself addressed a meeting recently where he said about unionists that he intended to “break the bastards” and that “the equality agenda is the Trojan Horse of the republican agenda”.”

The latest Irish budget presented last week by Noonan and Howlin was labelled “highly” and “intensely” political. This latest speech delivered by Micheál Martin was especially political. Little sentimental reminiscences about Tone, principally the address was about the delivery of blunt verbal blows to political opponents.

Especially political because April 2016 is quickly approaching. That month offers a double: the 100th anniversary of the Easter Rising on April 24; the Taoiseach Enda Kenny has confirmed that the next General Election will be in the Spring, and laws say an election must take place no later than 8 April 2016. The field is open, the atmosphere is charged.

Gerry Adams responded to the speech. He compared Micheál Martin to Margaret Thatcher, called the speech a “diatribe” and called Fianna Fáil a posing Republican Party that works for the people of the “Galway Tent”.

Disagreement among believers of the faith is always the most vicious and violent. The coming months represent a show down to find the true holder of the truth, republicans trying to out-republic fellow republicans.Ireland is out of the World Cup by the battle for the crown of Irish republicanism goes on.

Spring 2016 is also big for Northern Ireland, there Stormont elections lie. For the Stormont village the clash of the republican Titans is an irrelevancy and for the news bureaux someone else’s subject. In the south, Republicanism is strengthened, and Sinn Fein is weakened by having a range of parties with a range of narratives. By ignoring the south you strengthen Sinn Fein in the north.

It is an incredible pitch and soundbite that Sinn Fein offers the electorate – Sinn Fein is the largest party on the island of Ireland. That soundbite requires all island scrutiny. Northern politicians and media must therefore challenge Sinn Fein on that all-island plane.