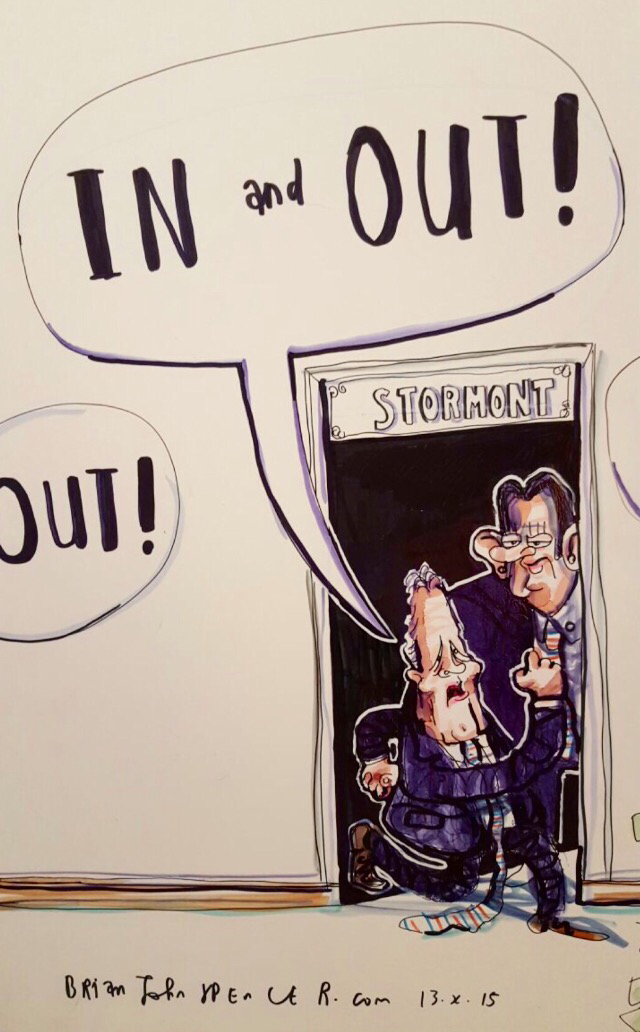 There is a growing recognition in Northern Ireland that the Good Friday Agreement (Belfast Agreement) has accomplished as much as is possible in its present form. It has provided stability and a badly needed breathing space and has helped, to a certain extent, to “normalise” Northern Ireland. Yet, recently Northern Ireland has lurched from one political crisis to another. The battle over the budget, the inability to agree on a way of dealing with the past, and the present political crisis over the “discovered” existence of the IRA as well as the inability of the assembly to create the promised “shared society” all represent the limits of the Good Friday Agreement.

In response to this stalemate, John Loughran wrote, ‘Time for ‘Good Friday Agreement Mark 2′ after the conference held in Belfast creating the ‘Civil Society Network’. He argues that ‘the stated aim [of this Network], “harnessing the willingness, hope and desire of many to work in unity to support the peace and political process.” On the day each contributor further pledged themselves to “advocate, support and challenge on behalf of civil society during this time of political uncertainty and beyond.”’ John further stated that ‘the general message was that the power sharing Executive and the political institutions must be protected. People didn’t seem to want more of the same type of government. They sought a type of government that was visionary, dynamic and effective.’

While agreeing with John that this is an important initiative and that civil society must be involved in moving Northern Ireland out of the cul de sac in which it now finds itself now finds itself I am not so sure the present system of mandatory power sharing and the executive is the best way to accomplish that. I am not saying to scrap the GFA, but to reconsider and rework it to reflect the problems and challenges that have arisen in the past seventeen years and to make the government more ‘visionary, dynamic and effective.’

After reading and considering John’s work, I then scrolled down to John (Lord) Alderdice’s comments on the article. Alderdice disagrees with the idea of a new agreement and argues that, ‘We need to stop blaming people from outside who have limited concern, but taking shared responsibility [my emphasis]for running our affairs together, despite our different long-term aspirations.’

Before going further, I want to make it clear that I am simply throwing out ideas that impressed me when I was doing my research, thoughts sparked by the present stalemate, as well as Loughran’s article and Alderdice’s comments. In other words, I do not mean this be a “cut and dried” policy statement, but a collection of ideas that can, or may trigger a discussion on the way out of this political impasse.

“The concept of responsibility rather than referring to power, from our point of view is about not having to sign up to each other… The only way ahead then, is to share it and to deal with responsibility or power in a shared sense.”

Obviously, adopting ‘sharing responsibility’ would mark the end of the mandatory power sharing and the use of the d’Hondt system. This would also end the current system of “consensus” politics and designations of ‘nationalist’ or ‘unionist’ when going in to the Assembly. It would open the door to voluntary coalitions based on self-interest as well as an opposition based on its own self-interests. However, for some in Northern Ireland, this is entering new and somewhat frightening territory with the spectre of one party domination returning. With the demographic shifts taking place in Northern Ireland, this would be as true for the unionist population as well as the nationalist community.

This means that when dealing with these changes and concerns, significant safeguards must be built into the system. These safeguards would make sure no one party could control the government, that a real opposition could develop and that the government would protect the basic rights of each citizen.

There is one concept that all parties now accept and that is “proportionality” in elections. Therefore, maintaining proportionality in local and national elections as well as appointments to the various committees in the government would pose no problem. However, I would suggest that in any new elections, that consideration be given to dropping the d’Hondt system and adopting the Sainte Lague method. The reason being is that this method would ensure that the smaller parties would receive representation and at the same time would involve the entire society in the running of the society through the sharing of responsibility. (To see how this would works go here.)

Another safeguard against any return of, for some, the dreaded majority rule would be a Bill of Rights based on a European Commission on Human Rights, which also appeared in versions of ‘Sharing Responsibility’. A Bill of Rights is something that still has not been enacted in Northern Ireland, even after a proposal in 2008 by the Northern Ireland Human Rights Commission. With a new form of elections and allocation of responsibility in government, a Bill of Rights would go a long way in defining and protecting the rights of all citizens of Northern Ireland and making sure that no one party or any government could violate the rights of anyone in Northern Ireland. In fact, Glen Bradley (Veterans of Peace) contends that it would fulfill the original intent of the Good Friday Agreement. In his response to Loughran’s essay, ‘Another elephant in the room’ Bradley argues:

“The agreement negotiated should have led to a Bill of Rights, which, if confronted, debated & agreed, would have largely led to a sustainable, incremental solution to many issues (including the position of former prisoners as assets to society).”

A proposal and safeguard that dovetail with what Loughran wrote is to involve civil society in the workings of the Assembly as well as the larger society. The initial proposals in ‘Sharing Responsibility’ called for co-option of civil society groups into the committee system of the government. Under the present system, this probably would not work. However, the notion of involving civil society in the sharing of responsibility is something that, as recent events and the recent founding of the Civil Society Network as well as the Loyalist Councils makes clear, is popular and possible. How this is done, I do not presume to know, but I argue that it can be explored through discussions embracing all political parties, NGOs and civil society as a whole, i.e. trade unions, ad hoc organizations, community groups, etc.

Perhaps one of the most important proposals for creating a shared society concerns integrated education. A 1986 version of ‘Sharing Responsibility’ argued:

This proposal is even more important today than when it first saw the light of day. Beyond the attempt to create an integrated education system that can, hopefully, begin to heal the divide in Northern Ireland, the reality of the huge cuts to the Northern Ireland budget, the system of segregated education is no longer economically tenable. Therefore, not only can a shift away from the present system of education be beneficial to the health of the society it can also end the constant “mirroring” of investment needed to maintain the different educational sectors. This would release money for use in critical sectors of society, including greater funding for all levels of education.

As I said earlier, this essay is not a policy statement nor an outright endorsement of any policies. However, I do believe that some of the progressive ideas mooted in the various iterations of ‘Sharing Responsibility’, as outlined above, are worth revisiting to help Northern Ireland find away out of the current political stalemate and to finally create a truly ‘shared society.’

Tony Novosel is a senior lecturer in History at the University of Pittsburgh. He is involved in 'common history' projects in Belfast.