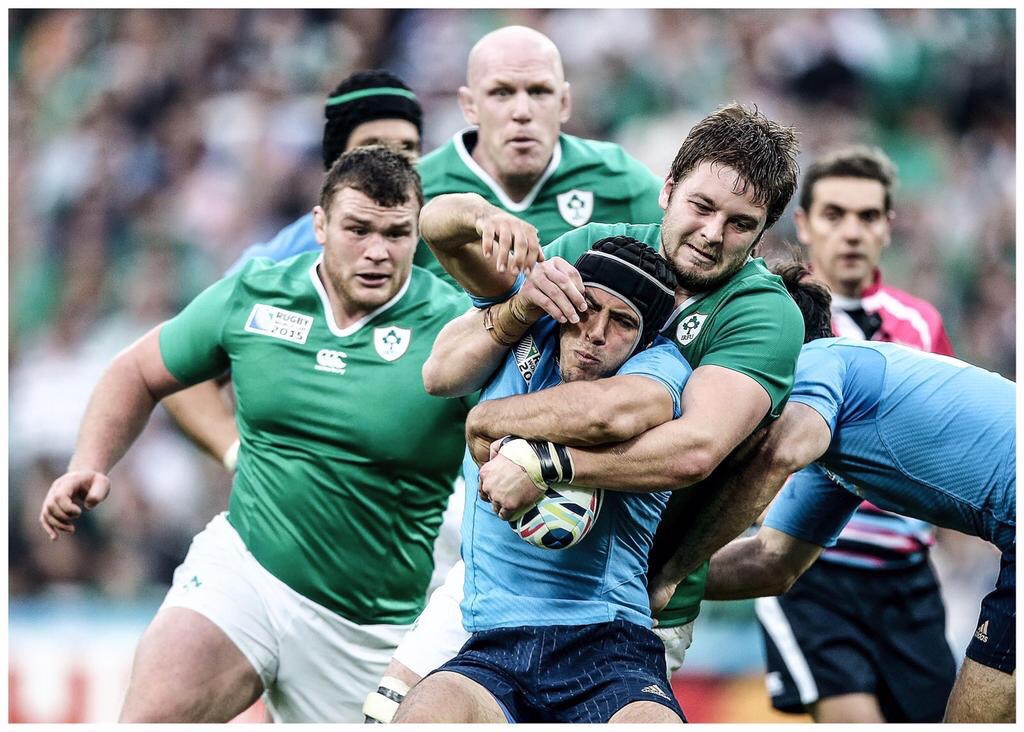 Ireland undervalued Italian rugby. In pre-game trash talk Stephen Ferris said Ireland was a train hurtling towards the French fifteen and the quarter finals; the Italy game was just some nice scenery on the way.

That’s taking your opponent for granted and speaks for the Irish performance on Sunday in the Olympic Stadium. An uncomfortable win. The Azzurri were in town and gunning for a win. They made 150 to Ireland’s 90 tackles and were committed to the last whistle. After the narrow win Schmidt confessed to Irish arrogance:

“For us I think maybe we got lulled into a false sense of security over the last couple of weeks.”

Here’s a run down of how it happened in front of the 53,000-plus crowd at the Olympic Stadium.

The Italians launched the kick-off, fielding to a near full strength Irish team. Tommy Bowe confidently collects, as he does all day, and Murray kicks for touch. The ball is played closed for the opening few minutes.

A clumsy spill is made from Sexton at 3 minutes 30. Italian captain Sergio Parisse is inspiring with a long pass into space and a bounce on Irish prop Mike Ross.

Sean O’Brien is clinical at the breakdown and does as Pocock and Hooper did time and again to England the night before, and steals ball for green.

Sexton made a break at 6 minutes, followed by strong Irish phase play. Italy penalised for offside. Ireland lines up for penalty to the left of posts at 7 minutes. Sexton strikes clean and takes the points. 3-0 to Ireland.

Play resumes with Italy continuing to bring play to Irish faves. Sexton is charged down at 10 mins but Henshaw tidies up.
Italy have shot on goal at 13 minutes 30 after Heaslip is penalised for playing the ball on the ground. Score by Tommoaso Allan. All even at 3-3.

Henderson is strong in the close quarters, making tackles, disrupting and slowing down ball. He helps turn over Italian talisman Parisse at 16 minutes.

From a quick lineout Ireland crash up the middle, Heaslip punches through the Italian defence, Henderson punches through the blue line, Keith Earls scores at 18 minutes from clever Henshaw hands. His 8th try in the Rugby World Cup competition. Sexton converts. 10-39 to Ireland with 20 minutes gone.

Italy remain strong in defence, forcing a turnover from Rory best with a handling error. They dominate possession are really bring it to Ireland in attack.

Tommoaso Allan has another shot on goal after O’Connell pinged for body position in ruck. Now 10-6 at 25 mins.
Italian get another penalty near Irish posts but kick to Irish left corner at 27m. Murray takes from an overthrow. Lineout on Irish 10 metre line after Sexton clearance.

Irish have lineout on Italian 5 metre at 37 minutes. Connor Murray uncharacteristically spills the ball at the base of the scrum.
Italian take scrum and get penalty against Ireland. Italians have lineout on their 10 metre, Ireland steal. The Irish fail to convert pressure into points and the first half ends after Keith Earls is put into touch. Score 10-6.

Henderson calls on the spirit of Stephen Ferris!

The second half begins with a Sexton kick to the Italians. Campagnaro receives and takes it to Ireland. Italians at 46 minutes continue to string impressive plays together. After surging Parisse break down the Irish left flank the Italian number 5 Josh Furno would have touched down were it not for commitment from O’Mahoney, 48 minutes gone. Italians continue to pressure Irish defences. Tommoaso Allan kicks Italy to within a point, 10-9 at 52 mins. Parisse continues to make his presence known, securing a counter ruck at 52 minutes. The Irish bang on Italian lines until 56 minutes. Sexton shoots a penalty on the Italian 22 at 57 minutes and scores. 13-9 to Ireland. Cian Healey and Nathan White on at 58 mins. Ireland have another penalty at 60 mins. Sexton strikes and scores. 4 out of 5, making it 16-9. At this stage Italy have made twice as many tackles as . Parisse comes off at 64 minutes. Italian kick on Ireland posts. The replacement kicker Canna misses. Still 16-9. 36 year old Mauro Bergamasco comes on for his fifth Rugby World Cup. Ireland start to control the game and ring the changes. Chris Henry and Devin Toner are on, 67 minutes gone. Sean Cronin on for best at 69 minutes. Peter O’Mahony is yellow carded at 71 minutes for a shoulder charge at the ruck. Italy take penalty from scrum at 74 minutes and pressure Ireland with line out on Irish 22. Ireland steal and play it back up the pitch and finish with lineout on Azzurri 22. Luke Fitzgerald is on for ever energetic Earls. Still 16-9 to Ireland in the closing stages. Never entirely comfortable as Italy continue to plug away. The veteran O’Connell knocks on at 77 minutes trying to play smart. Ireland get a penalty and Sexton misses his sixth kick on goal. That 4 kicks made from the 6 taken. After Italian pressure Heaslip secure the ball and scrambles up the pitch. From the ruck Sexton takes the ball and with the clock passing 80 minutes the ball is battered into touch. Full time 16-9.

It was win win guaranteeing an Irish place in the last 8, but it simply wasn’t the performance and scoreline the fans, reporters, players and staff expected. This time four years ago Ireland put over 30 points on Italy.

The Irish backrow was neutralised and the backline was kept in check. It’s apparent that Jacques Brunel’s Italy did their homework.

Ulster’s Iain Henderson provided bullocking go forward ball and resolute defends. He was named the official Man of the Match and heralded by rugby writer Murray Kinsella and Irish prop Cian Healy as channelling the strength and presence of Stephen Ferris. High complement.

Irish eyes are now on the Pool D decider against the French. The Sunday game in the Millenium Stadium is massive for Schmidt’s men. Win and Ireland will likely play Argentina. Lose and it’ll be a New Zealand quarter-final. The margin between those two vistas needs no explaining. It does need said that Ireland will need to bring more to Cardiff than they did to London this weekend.