You are at:Home»News & Current Affairs»Opinion»A look back at Ireland v France at the Millennium Stadium
Social share: 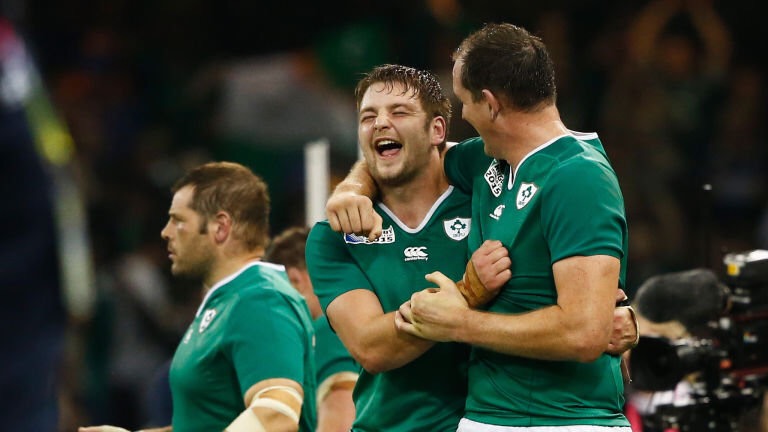 The Irish fans went to Cardiff not knowing what to expect. France is the team that could beat New Zealand one week and lose to Italy the next.

This was the Pool D crunch. Win, and it’s Argentina in the semi-final. Lose, and it’s New Zealand. Neither a scenic vista, but one is infinitely more appealing.

Ireland haven’t lost to the French since 2011, but they’ve never beaten les Bleus at a World Cup. Now Ireland have the ability and with Schmidt, the plan. Players know their role and what they have to do to get the right result. That’s the Schmidt effect.

The Pool D decider began with the Michalak kicking off, overseen by Nigel Owens under a closed roof Millennium Stadium.
After heavy hits in the first minutes of play Michalak has a shot on goal after a Toner penalty. The maverick out-half misses.

The French continue with Bastareaud aggression. French 15 has a kick on goal from the halfway after Ireland collapse scrum. Mentally this is ominous. Heavy strikes on the Irish defensive lines and regular strikes on Irish goal. Spedding misses. Ireland are off the hook for now.

At 12 minutes Sexton takes a penalty and converts. Suddenly it’s level at 3-3 with a Spedding success on goal. Now with 18 minutes gone Sexton strikes and scores another penalty. 6-3 to Ireland.

Suddenly it’s back to even at 6-6 with another Spedding penalty, that’s 2 out of 4 for the French.

The see-sawing of the score-board captures the intensity and tempo of the match with both sides banging and bashing away.

Sexton is hit heavily by a Picamoles tackle after a hospital pass from Best, who has otherwise been very strong.

Playmaker and the anchor Sexton is off at only 25 minutes. An old Ireland would have folded losing their star man but Ian Madigan comes on an excels.

With less than 2 minutes of play Madigan strikes a penalty and puts Ireland ahead at 9-6.
The game at this stage is very tight with tight-quarter combat and the odd break. French attack is blunt but immense, Ireland soak it up.

Then the moment of the match. Keith Earls fumbles a sitter after Bowe is let off his leash down the left flank. Fans are open mouthed.

O’Connell pulls up after a ruck and is in serious trouble. The talisman follows the Sexton path off the field.

As half-time approaches the Irish look heavy footed at times with the French remaining dangerous. They probe and look dangerous, determined to cross the Irish line.

Ireland hold the lead for the half way break but have lost two of their world class players. It this was an Eddie O’Sullivan Ireland the team would fold, but Schmidt has ensuring depth and instilled action plans for just these scenarios.

Madigan starts the last 40 minutes with Henderson on for O’Connell.

Individual brilliance from Henshaw at 48 mins, then back on feet for another bash at French line. Ireland depleted of their Star Men Sexton and O’Connell look sharper as the clock ticks over for the second half.

At 49 mins Rob Keanry crashes over for an Irish try after strong ruck work. Madigan misses conversion, 14-6 to Ireland.
Ireland look like Wales after another key player exits the fray, this time Peter O’Mahony. Yet Ireland remain balanced and composed, something new for longtime Ireland fans.

Morgan Parra puts France 5 points short of Ireland with another penalty conversion. 17 minutes of play now left. France looked dangerous for the whole of the first half but as the second half rolls on Ireland look more and more imperious.

After 12 phases Rory Best crashes against the line of defence on the French line, from the ruck Murray taps the ball down against the post padding and Nigel Owens awards the try. Madigan converts to give Ireland an ascendant lead, 21-9 with 8 minutes to go.

Now sloppy the French give away another penalty at a scrum. Madigan converts, putting Ireland home and dry and a ticket to an Argentina quarter final.

The Irish XV put in a much improved performance at the Millennium Stadium compared to the Italy game the weekend before. They respected their opponents and took serious knocks, but stuck to the playbook and held out for a victory with a final score that did not reflect the magnitude of the game. Heaslip said afterwards the players were mentally and physically drained.

The downside is Paul O’Connell has played his last game of this World Cup and his career. Sad for Irish rugby at whole. O’Mahony is also out. Sexton is still unclear.

Ferris articulated the arrogance of Ireland ahead of the Italy game. Schmidt’s men will have to regard Argentina as though they are the All Blacks. The Pumas have huge ability and have smashed Irish World Cup hopes in the past. The memory of the Lens loss in 1999 is still raw, the narrowness of the 2003 win still haunts. These are the instruction manuals for next Sunday.