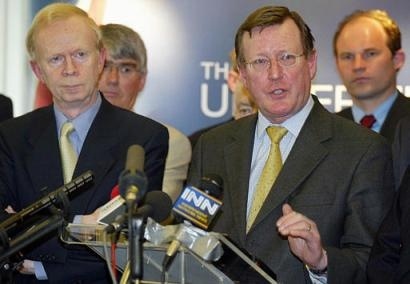 To look for meaning in difficulties has never been strong within unionism. To focus blindly on what has happened rather than the opportunities presented by what has happened, is not a ready recognisable trait. These are weakness laid bare yet again. They are not the only failings.

In a recent interview when asked by Alex Kane why he, David Trimble, as leader of the UUP, the biggest party within unionism at the time, had such difficulty selling the Good Friday Agreement to unionism he identifies a number of factors.
The most telling and disturbing for unionism is when he refers to a ‘bitter and deep hatred of nationalists within one young influential individual’, ‘ deep feelings of sectarianism and prejudice within the middle class’, ‘some embittered people’ and ‘pools of bigotry and prejudice.’

This is not by any means, a complete picture of unionism but those who were present at the many debates that took place and witnessed the muddle of recrimination within the UUP at a turbulent time for the party and the Good Friday Agreement will recognise the truth of what is stated by David Trimble.

Deliberate or otherwise it was prevalent in the language and fervour of debate that took place and explains why too many unionists saw in the Good Friday Agreement what they perceived to be ground lost as opposed to ground won.
The Agreement, grounded in uncritical unorthodoxy was ethically and morally challenging not least in seeming to assume that all the objectives and narratives of all the signatories were equally valid. It seemed to many within unionism that morality and ethics had been hijacked to make the unacceptable acceptable but endorsed, flaws and all, by a vast number of the electorate it presented an opportunity for a new start and the creation of fresh political structures that would make a clean break with a corrosive past and the politics which had resulted.

It was an opportunity to rebuild and avoid the mistakes of the past.

This was the spirit of the Agreement but the failure within Stormont in sustaining this has been little short of an assault on the hopes and aspirations of a community. Caught up in a swirl of bad politics, it has been a collective political failure.

Unionism has been no guiltier than others but committed as it is to persuading for the union and to ensure that the human cost in injuries and loss of life resulting from all of the conditions that produced them should never be repeated, its purpose and direction were clear.

Reconciliation and transformational change, not adjustment but change, grounded in social justice, equality and a peaceful society should have informed policies and political decisions but political agreements it seems do not necessarily change hearts. Like other parties obsessed by power and political terrain it retreated into a tribal bloc and like other parties continues to look at issues through a set of experiences of history and bitterness it finds hard to abandon.Unionism seems content to scrape and scratch against nationalism from choke point to choke point.

This lies at the root cause of the failings of unionism during the current crisis.
It has become enmeshed in turning politics into a spectator sport constantly reassuring increasingly frustrated spectators that it is doing what is right for Northern Ireland. If you are doing it you do not need to keep saying it. Who is it trying to convince?

Northern Ireland may be more peaceful than the days of bombs and bullets but it remains a community that awaits lasting resolution to deep-seated problems.

If unionism could break free from the limits of its narrow cultural and religious identity instead of using these as a filter for its actions and decision-making it could lead a re-alignment of socially progressive politics by squeezing out what is obsolete and refreshing what is relevant. This should not have to wait, as Claire Sugden MLA recently suggested, for a younger generation of political leaders.

Unionist leaders need to be aware that many unionist voters are not impressed by resignations, brinkmanship and electioneering camouflaged as principles already compromised by graduated responses and pacts. This serves only to distort the truth without getting caught in a lie. The electorate prefers correction to conflict.
This will only be achieved through participation, resolve and creative leadership. Recycling old strategies and abandoning realities to retreat to toxic and opportunistic populism which confines the community to the narrowest of cultural and intellectual horizons is to render unionism marginalised and peripheral within the Union, the opposite to which unionist leaders claim to aspire. It serves only to release old animosities behind a fog of rage, charge and counter charge that serves to obscure and limit what it is possible to achieve. The curtain is lifted only to reveal corrosive relationships.

Unionism is not being well served by any of the unionist parties. Historically, unionism abandoned many of the population. It now risks abandoning an increasing number of the electorate, unionist by commitment, but sharing political convictions and socially diverse and cultural interests not represented by political unionism or communal ceremonies and traditions.

There is common ground in seeking an end to criminality and political reform to the devolved institutions but when this gets lost in the pursuit for power and damaging your opponent to win influence for its own sake, politics forfeit sustaining ethical and moral purpose.