You are at:Home»Sport»Ireland versus Romania – Brian Spencer has been computing the finer details of the Irish win over the weekend
Social share: 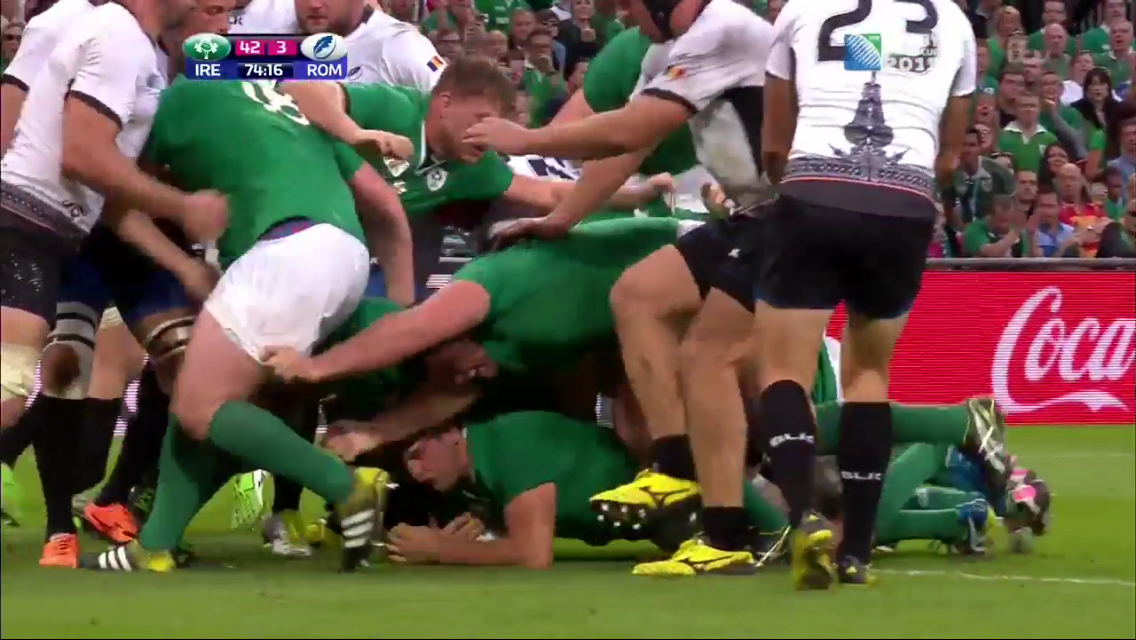 Chris Henry of Ulster barrels over for Irish try number 6 against the Romanian Oaks, and number 13 of the tournament.

Ireland lined up against Romania in front of a Rugby World Cup record crowd at Wembley Stadium – 89,267 spectators.

Jamie Heaslip led a reworked Ireland team following the bonus point 7 try win over Canada, featuring 4 Ulster starts. The readiness to rejig the XV shows the strength of Irish Rugby and the desire of Joe Schmidt to keep the boys competing.
The Oaks put the ball in play for the 16:45 kick off. Ireland keep possession for a long period of minutes with Darren Cave making a strong break. Ian Madigan who slots in for Sexton puts up a garryowen with Payne collecting. The play makers throw the ball about with confidence putting it into the hands of speed men on the flanks and to the heavy hitters stomping up the middle.

After a handling error Romania clear to touch, Irish lineout on their 10 metre line.

More thumping Irish attack ball with strong clearing. After good continuity Richardt Strauss couldn’t hold onto Devin Toner offload. Romania show they are up for the game after holding possession for a decent series of plays.

After only 5 minutes Ireland has registered 32 carries and made 71 metres. Romania one of each.

Irish out half Ian Madigan takes 3 points at 7 minutes after Romania are penalised.

Romania have another good series of possession going into the Irish 22. Jared Payne gives away a penalty for not rolling away. Romania go for and take 3 points. It’s 3-3 with 10 minutes on the clock.

42 tackles from Romania after 10 minutes. It’s frantic rugby. Romania remain defiant and troublesome into 13 minutes with a massive number 7 and very capable front 8. 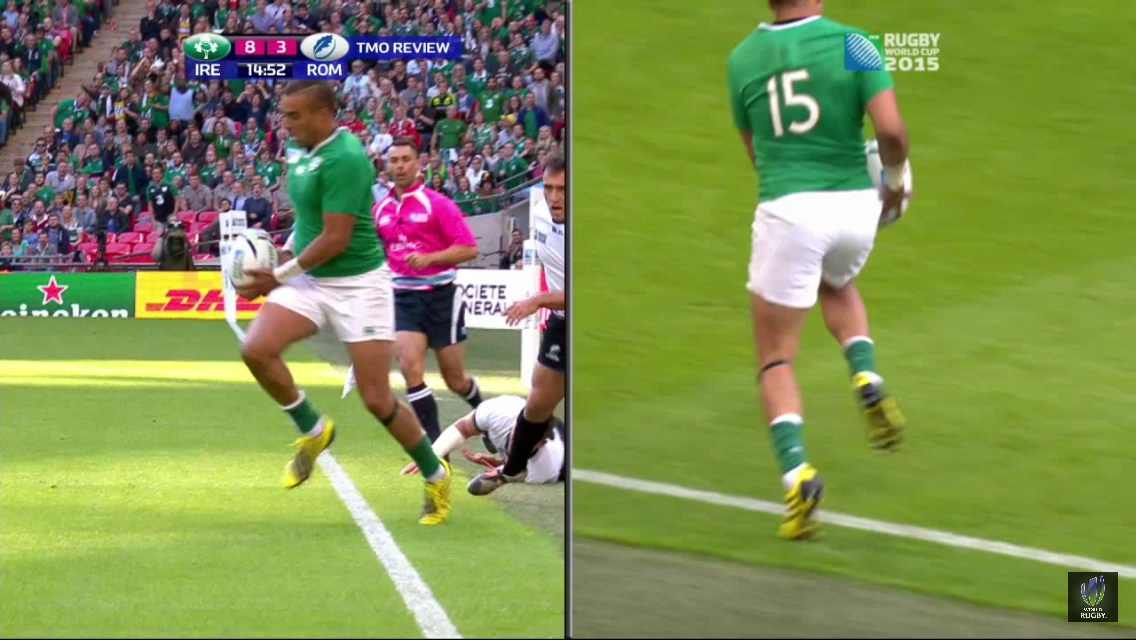 At 14 minutes the Irish full back Simon Zebo touched down after evading the last line of defence with a spectacular kick and collect.

However the TMO correctly adjudged for a foot in touch. A 16 minute lineout for Ireland with possession interrupted with infringements from Romania. Three more points from Madigan at 18 minutes, now 6-3 to Ireland. 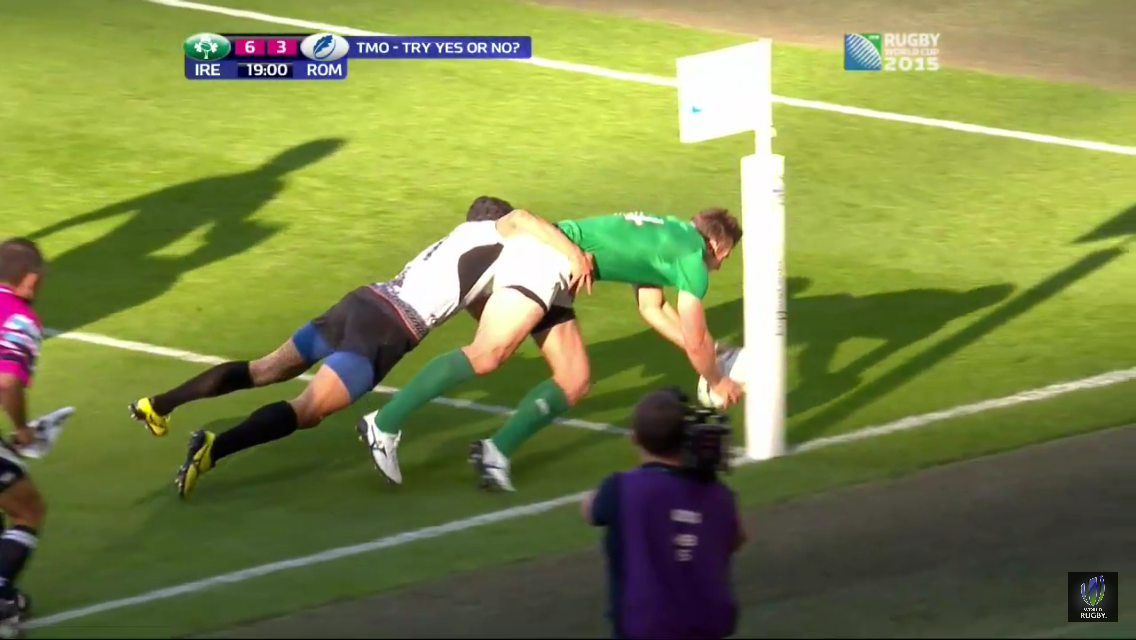 The colossal Keith Earls collects from a high ball, offloads to Chris Henry feeding to Heaslip and out wide to Zebo and into Tommy Bowe who’s crashes over in the right hand corner. It goes to the TMO and is given. It’s made 13-3 after another Madigan conversion, 20 minutes gone. 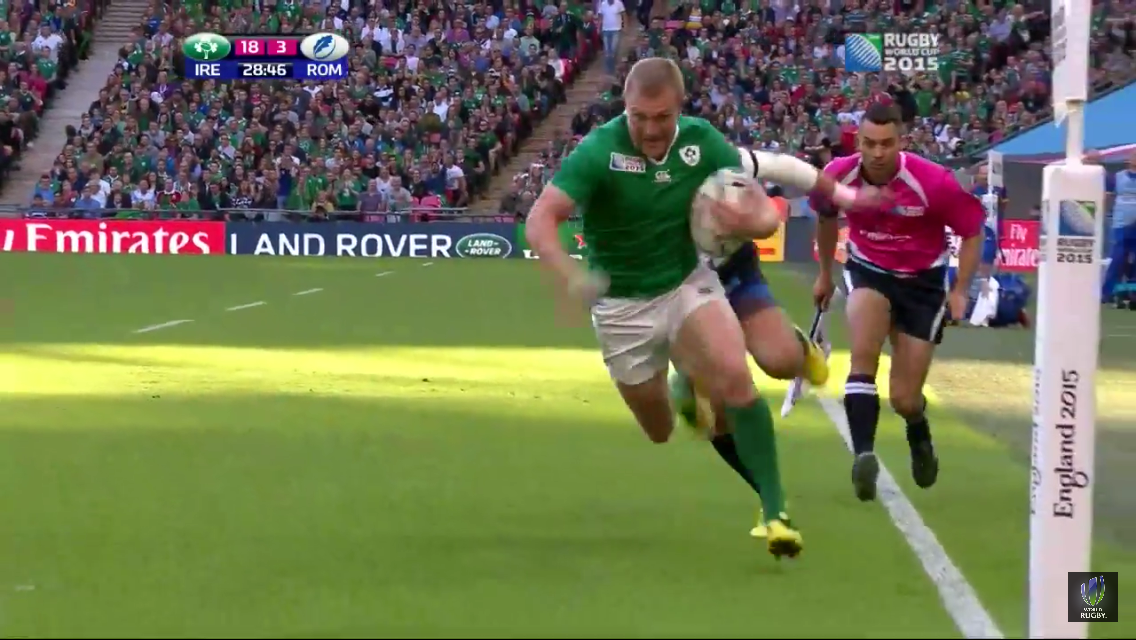 Keith Earls then scored from an explosive burst down the left flank after a magic pass from Zebo on Romania 22 at 28 minutes. Madigan misses conversion to make it 18-3. That is 2 out of 3 kicks for him.
In the last minutes of the first half Ireland are hungry for more points but force the plays and in a manner unbefitting a top tier team lose the ball on two occasions including through a strong counter-ruck by The Oaks.

The whistle goes and the players turn to the changing rooms.
Earls and Zebo have ensured an electric back-line that is utilising the wide expanses. Henry has been snaffling away, fetching and working with the pack to allow quick go forward ball. Bowe is strong in the air including a heroic take from a high ball straight out of a GAA playbook.

Romania have been resolute and determined and have made sure Ireland have to fight for every metre and all their points.

The second half begins. Devin Toner catches from a Irish kick and sets up a ruck for more play. Two minutes in and Cian Healy brings to the world a jaw dropping spectacle. A 80m spike down the pitch after Romanian pressure has Ireland deep in their half.
Ireland have a lineout on the Romanian 5 metre after the fullback clears Healy’s long range kick. Ireland take possession close to Romanian line and with vision Eoin Reddan dinks a grubber through the Romanian line with Earls collecting and dropping over the line in explosive style for his second try.

Earls equals Brian O’Driscoll’s World Cup try-scoring record with his seventh in the competition. Madigan converts making it 25-3 at 43 minutes.

Like O’Driscoll Jared Payne is playing like an extra back-rower making a hard tackle and securing a turnover.

Rob Kearney is on as the impressive Earls exits for a Head Injury Assessment (HIA). He makes an immediate impact, charging down a Romania 14 kick on their own line. Romania line out on their line at 53 minutes. Romania clear.

Paddy Jackson is on for Payne and Madigan moves to 12, 58 minutes. Captain Jamie Heaslip and hooker Strauss go off for Cronin and O’Brien at 59 minutes. Reaffirming the strength and confidence of the squad under Schmidt.
Bowe scores his second try after a well worked move from an Ireland lineout. Paddy Jackson slipped to Reddan who fed to Bowe. Madigan converts, 32-3. 62 minutes gone.
O’Connell comes on at 63 minutes and tightens up the set pieces. Rob Kearney comes on again after the electric Earls makes his final exit. Suspected concussion.

Kearney scores after another scintillating move up the left of the pitch; Jackson to Zebo to Kearney on the back of a green scrum. Score is 37-3 after the conversion is missed. 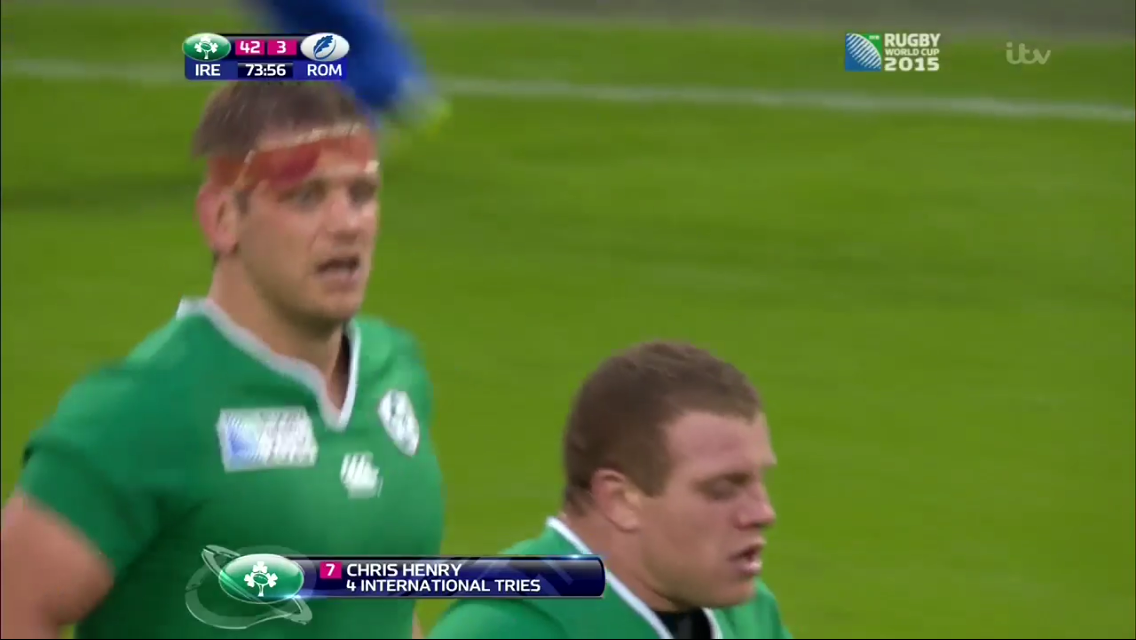 Cave makes another break and with heroic rucking from Bowe Ireland get the penalty from hands in the ruck. Ireland kick to corner. Taken by Jordi Murphy the maul is steered at the rear by Henry who goes over the whitewash surrounded by green. Madigan converts. 44-3, 74 minutes. 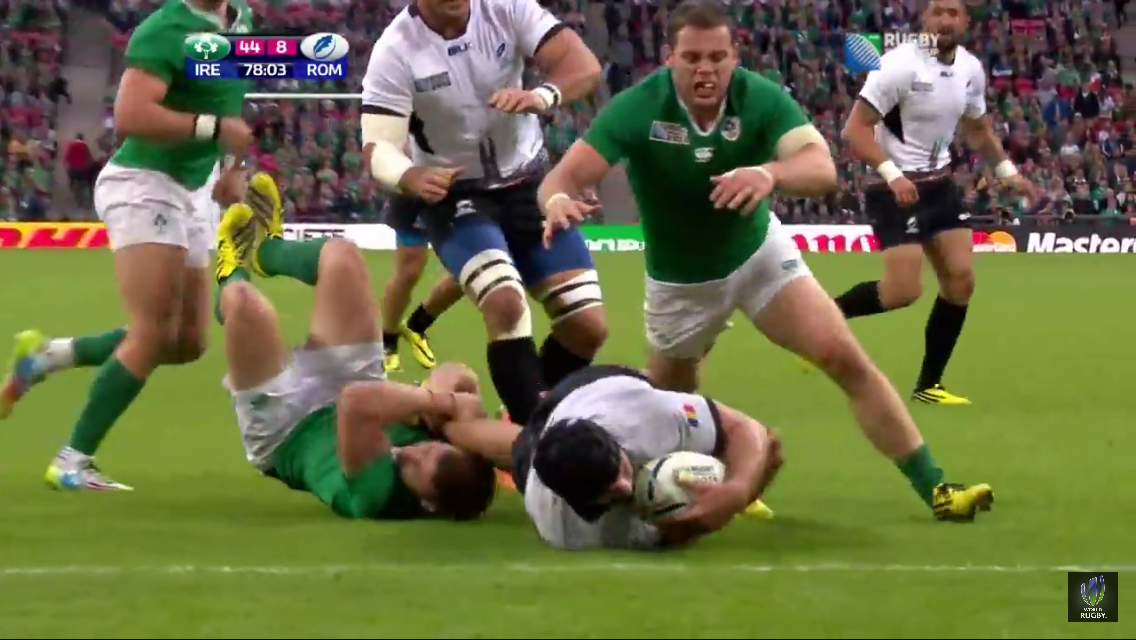 Typifying the valiance of the Romania Oaks their number 5 barrels under the Irish posts at 77 minutes. A nice consolation made yet better with a conversion – score is 44-10.

Ireland take their penalty and collect from a lineout on the Romanian right flank on 5 the metre line. A maul directed by Murphy at back, Reddan then feeds to Bowe but Ireland lose to Romania after Bowe is isolated.

Full time 44-10 and Ireland charge up the table in group D with 10 points out of the maximum available, pitching Ireland up nicely for the crunch game against France in Cardiff.

In spite of his early exit Keith Earls is made man of the match, and deservedly so. Ireland play well throughout the match in the fronts and the backs with the substitutes making a marked impact.
Scoring thirteen tries in the tournament so far Ireland have shown their are a dangerous unit that can score from 1-15 anywhere on the pitch. This is a team that can go far in the tournament.
Ireland: Simon Zebo, Tommy Bowe, Jared Payne, Darren Cave, Keith Earls, Ian Madigan, Eoin Reddan; Cian Healy, Richardt Strauss, Nathan White, Donnacha Ryan, Devin Toner, Jordi Murphy, Chris Henry, Jamie Heaslip (captain).
Replacements: Sean Cronin, Jack McGrath, Tadhg Furlong, Paul O’Connell, Sean O’Brien, Conor Murray, Paddy Jackson, Rob Kearney.