You are at:Home»News & Current Affairs»Opinion»‘E pluribus unum’ Bram Fischer was that one in South Africa – By Patrick McKeating
Social share: 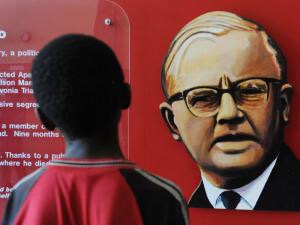 Have you ever wondered why Nelson Mandela wasn’t sentenced to death? After all, he was the most wanted man of a brutal regime. The reason is simple – because of Bram Fischer. Born of Afrikaner political stock, he studied at Oxford on a scholarship from Cecil Rhodes. But he wandered from the path beaten for him by his family.

As a committed reformer, he rejected the racial status quo of apartheid and his influence on the African National Congress (ANC) during the 1950s and 1960s cannot be underestimated. Their view had been primarily for black rights in the face of racial discrimination however Fischer added a socialist element to include all races under the one flag for a new South Africa not tainted by the stains of the past.

A unique political leader, he personally led the life he wanted all to lead in South Africa. He openly associated with all races, he all but adopted the daughter of his black maid and each weekend in Bloemfontein he allowed the entire neighbourhood to frequent his swimming pool. For many Indians and Africans this their sole experience of an integrated society.

Upon leaving Oxford during the Depression and returning home via a booming Soviet Union, he joined the communists at the time were the only party in South Africa to welcome people of all races.

When lecturing law at university he struck up a strong friendship with one of his only black pupils, Nelson Mandela.In ‘The Long Walk to Freedom he wrote, “we met and were life long friends. Bram could have been prime minister of South Africa but instead he became one of our staunchest allies.”

In 1958 Mandela and 155 other black leaders gained notoriety in the Treason Trials which lasted for five years. Their defence was led by Fischer and all were acquitted. However a greater task lay ahead in the Rivonia Trial of 1964. Although many of the accused welcomed the martyrdom that would come with a death sentence, Fischer had other ideas.

Within two years of the ANC leaders being sentenced to life imprisonment in Robben Island, Fisher himself was arrested for his communist party membership. During the trial he skipped bail and went underground before being caught nine months later. It was an act of extraordinary sacrifice as when he was caught the weight of the law was thrown at him and he was given the same sentence as ‘The Black Pimpernel’.

Seen as a blot on the copybook of the white establishment, he was a hero for the black population of South Africa. But he was not to enjoy the eventual success of Mandela as he died of cancer in 1975. Nobody knows where his ashes were scattered as the police seized them at his funeral He once said, “We are glowing embers which will be part of a new flame.”How right he was.