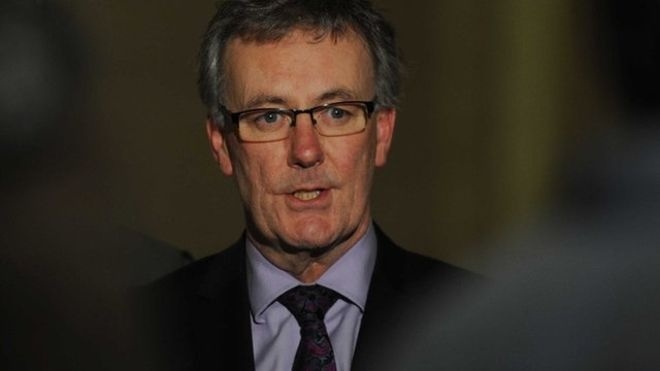 Maybe Mike Nesbitt is playing a smart game of chess. Or maybe he can’t even visualise toppling dominoes. He’s the enigmatic (flip-flopping?) ‘moderate’ who takes a hard-line to “shrink to grow” his party.

Maybe he correctly assesses that there is no large ‘moderate’ Unionist constituency which wants to share power with SF, and which is receptive to sharing NI public life with the nationalist identity.

Nationalists feel, from anecdotal experience, that such a body of moderate Unionists surely exists – but where is it manifested in terms of political parties? Should nationalists address the possibility that‘moderate’ unionism is a myth?

Mike’s colossal rookie blunder is to storm out of the Executive on the wrong pretext.

He could have easily withdrawn on the basis of Stormont’s institutional dysfunction. Mike might even have gotten credit for shaking up the stagnation.

Instead, he swerved headlong into Jim Allister territory, exploiting fears of the Republican bogey-man. This is massively more disruptive to our politics when done by a ‘moderate’ than when done by those more easily dismissed as extremists. When a ‘moderate’ does it, it yanks at the fabric of the Agreement.

It may be a blunder of historic proportions, unleashing forces which have profound consequences. It foolishly recharges Unionism’s existential question: whether to share power with the other side.

Tellingly, Unionist parties justify doing so on the basis that it’s a necessary evil. They say to Jim Allister that it’s just unrealistic to ignore SF’s mandate. Paisley got his party over the line by selling it as the least worst option, the alternative being Direct Rule with growing Dublin influence. As it turned out, he became friends with Martin McGuinness, appearing to have a Damascene conversion to sharing with the Other.

Who else in the DUP can that be said of? Perhaps something of the sort is true of Robinson, if only for rationalised, strategic, purposes. Hence his Autumn 2012 Iveagh House speech, proclaiming expansive unionism. Hence, too, his characteristic snarl at “lemmings” in his party.

Pious claims that this crisis is a principled stand against violence are untenable. A reasonable word limit precludes exposition of Unionist parties’ hypocrisy on violence. That hypocrisy results from the slanted foundation stone of Northern Ireland: the mind-set that Catholic lives matter less. It follows that loyalist violence matters less.

The most recent manifestation of this is our First Minister’s intervention to lobby a judge for leniency for a UDA suspect. Is it conceivable he would likewise lobby for a republican suspect?

If the DUP can’t withstand the gathering drumbeat of Lundy accusations, on what basis, and by what mechanism, could Unionism later say it trusts the other side?

Why would SF accept being bound by a reconstituted IMC.How could they if the IRA doesn’t exist?

Does Mike care whether stoking anti-GFA Unionism also strengthens the argument of Anti-GFA republicans?
Demonization of SF is gleefully seized upon by Dublin establishment parties who play dirty “senior hurling”, with secondary regard to the impact on the North. They should be careful what they wish for: another term of Dáil opposition might benefit SF.

Interestingly, the Twitter accounts of Anti-Agreement loyalists bristle with approval of Dublin newspapers, some of whom have a “my enemy’s enemy” relationship with Anti-GFA republicans.

At Twaddell, the PUP has shown its willingness to be ruthless in pursuit of an electoral foothold. They have pronounced the current crisis a “fatal blow” to SF fitness for government. Their grassroots aspect sharpens their accusations of DUP venality.

If nationalists consider SF to be unfairly punished, they may boost its support, at the expense of the SDLP. It may be a hardening Sinn Fein, disillusioned with overtures to Unionism.

If the two communal blocs thus solidify, how can that benefit the UUP? (Of course, Mike insists this is all for “country not party”.) The best Mike can hope for is Robinson’s scalp. In the longer term, the UUP cannot out-DUP the DUP.

Dominoes are wobbling, and nobody knows where Mike’s existential blunder will lead. Whatever about the IRA, Sinn Fein, and the imperative of sharing with Irish nationalism,will definitely not go away.

Social share:
Colm Dore middle-class Mike Nesbitt Northern Ireland UUP
Previous Article‘Have we the generosity to include each other in our shared future?’ – By Dr Michael Wardlow
Next Article A Fart in Stormont’s Space Suit – By Brian Rowan