You are at:Home»News & Current Affairs»Opinion»‘The reenactment of the funeral of Fenian hero O’Donovan Rossa seen through a Unionist lens’ – by Brian Spencer
Social share: 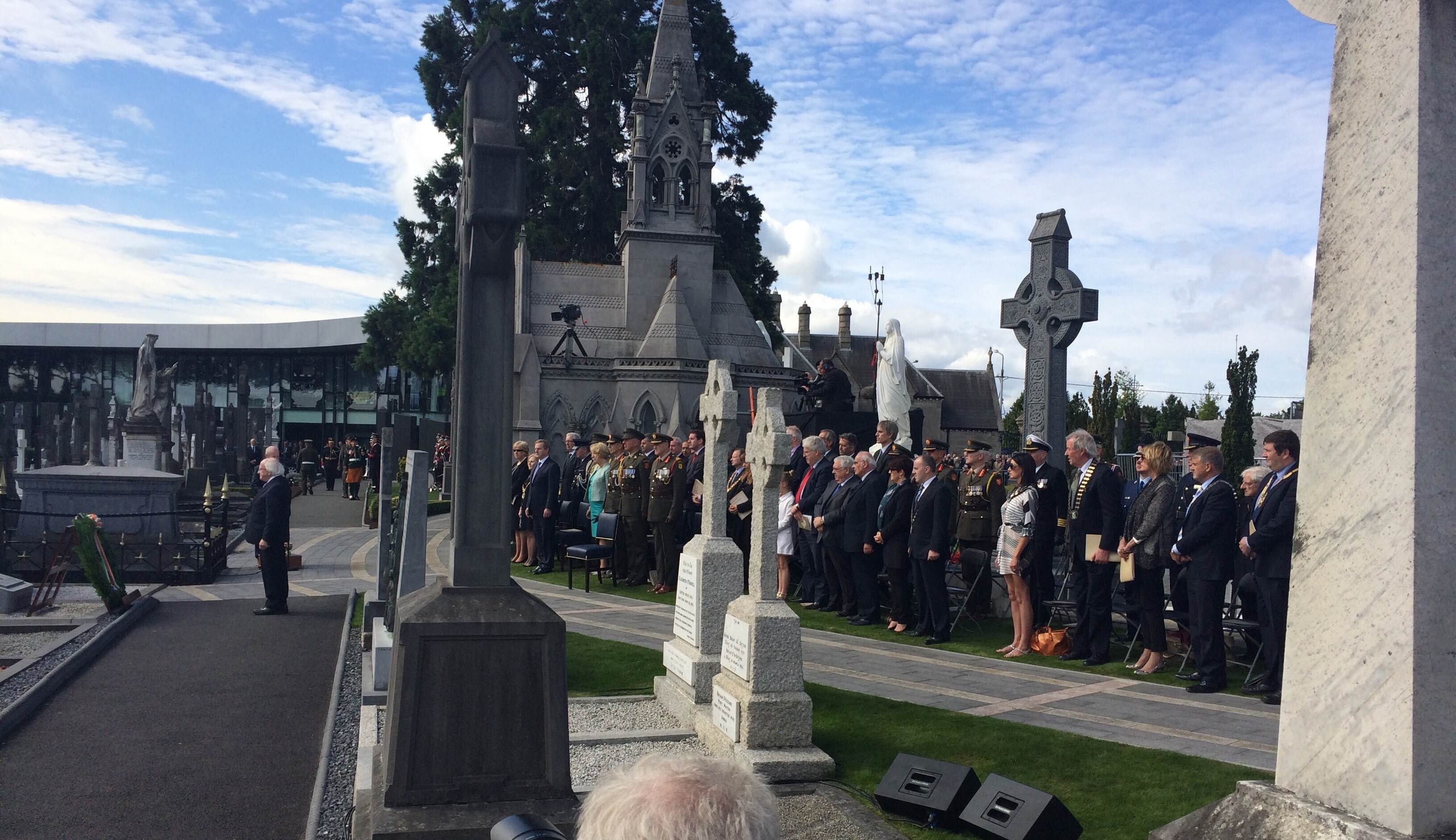 ‘There is no getting away from the Irish State’s endorsement of historical violence, murder and mayhem.’

What’s a northern Protestant and in-Utero unionist doing asking about and attending commemorations for a revered republican rebel, ferocious Fenian and “progenitor of terrorism”?

Born in 1832 in Cork he was imprisoned in the late 1850s, arrested and imprisoned again in 1865 for plotting a Fenian rising. Exiled to America in 1870 he helped orchestrate the “dynamite campaign” of England and Scotland during the 1880s.

I am Irish. I am not into O’Donovan Rossa. Does that not then mean I’m not and cannot be properly Irish?

His story is not part of my cultural and political inheritance, I had not heard of him until the this year 2015. The customs of Irish protestant primogeniture means his methods and ideology are alien and abhorrent to me. Jeremiah’s story is a jeremiad, not an elixir in my tradition.

Edward Said (US professor of Orientalism) said “nations are narrations”, and Ireland has written it’s narrative, and Jeremiah O’Donovan Rossa is a defining chapter in that book, fixed and immutable.

Ireland is Green and Orange, in the black and white sense, there is no middle ground.

Irish statesman John Bruton is maligned as a revisionist and west-Brit for questioning the republican orthodoxy associated with the “brave and splendid Gael”.

Equal and opposite, the two world views are mutually exclusive and incompatible.

The Irish flag says Green, White and Orange; Wolfe Tone’s republicanism says Catholic, Protestant and Dissenter, but the general view is that Ireland’s story is Green only and Catholic only. There is a perception that there is no real and actual accommodation of the Orange and Protestant. Or is there?

My trip to Glasnevin Cemetery for the centenary commemoration of O’Donovan Rossa’s funeral was to test this.

For the uninitiated, the death and burial of Jeremiah O’Donovan Rossa is an event of statecraft proportions. The interring of the “unrepentant” and “unbending” Fenian is the germinal moment in the history of Irish republicanism, it was the call to arms and the count down to rebellion.

The event was masterly planned and executed, huge crowds and emotions were mobilised, hundreds formed the cortège and 50,000 lined the streets. It was a show of strength and of intention.

The send-off climaxing with a rousing and famous oration by Padraig Pearse. At the graveside and in “spiritual communion” with the deceased Fenian, Pearse said that day, August 1 1915:

“The seeds sown by the young men of ‘65 and ’67 are coming to their miraculous ripening to-day.”

He called for a reaffirmation of the “Fenian programme”:

“I may be taken as speaking on behalf of a new generation that has been re-baptised in the Fenian faith, and that has accepted the responsibility of carrying out the Fenian programme. I propose to you, then, that here by the grave of this unrepentant Fenian, we renew our baptismal vows.”

The then-to-be leader of the Easter Rising ended with a pulsing and provocative blast of rhetoric:

The commemoration event one century later, August 1 2015 marked the start of the year of commemorations that will culminate with the marking of the 100th anniversary of the Easter Rising.

I arrived in Dublin the night before, staying in Rathmines. I woke early in preparation for the big day, subject-matter reading was required.

From the south I cycled to the north side and to the famous and fascinating Glasnevin cemetery, purchased and opened in 1832 by Daniel O’Connell as a place where people of all religions could be buried.

The sky was open and blue and the air fresh as I passed the imposing gates and walked towards the press area to a graveside view. There were big crowds and energy in the place. I stood by the grave of famous trade unionist James Larkin. For a moment I pondered the rhyming of history and the historical communion I was having with those who stood over the same sod 100 years previous.

Back then my antecedents Belfast and Bushmills antecedents had signed the Ulster Covenant, so I had no doubts about my place in history.

I witnessed the drilling of the Defence Forces. The rehearsing of lines. The subtle but conspicuous security presence. The filing in of politicians and dignitaries, seated on a grandstand before the modest gravestone and under O’Connells tower.

I saw a unionists or two, there in their capacity as representatives of the War Graves Commission. Martin McGuinness was there, Gerry too; the arch-deriders and adversaries of the State’s commemoration of 1916 and associated events. Alasdair was present. De Valera’s grandson O’Cuiv was there with his family standing to attention for photo ops.

The motorcade arrival of President Michael D Higgins, Taoiseach Enda Kenny, Minister for Arts Heather Humphreys and the Sinn Fein Lord Mayor of Dublin Criona Ní Dhálaigh was announced over tannoy. At 10:40 with everything and every one in place, proceedings began.

The Chairman of Glasnevin Trust John Green gave a welcome and gave an interesting speech, including a contested and highly controversial suggestion that O’Donovan Rossa ended his days with an endorsement of the leader of Home Rule, John Redmond. This has since been vociferously rejected from some quarters. Turning to Pearse, he said the famous oration synthesised the past and present to project the route forward.

Then President Higgins laid a wreath on O’Donovan Rossa’s grave. The message read: “In loving memory of Jeremiah O’Donovan-Rossa, exiled hero and a source of encouragement for the cause of Ireland.”

There was a minute’s silence, followed by a piper’s lament. Then the re-enactment of Pearse’s famous oration by actor Jim Roach. This was an incredible spectacle, forceful words delivered with unbowed conviction that affected even this avowed unionist.

The re-enactment of the legendary oration was followed by a 21 gun salute from the Army, bringing the ceremony to a close. 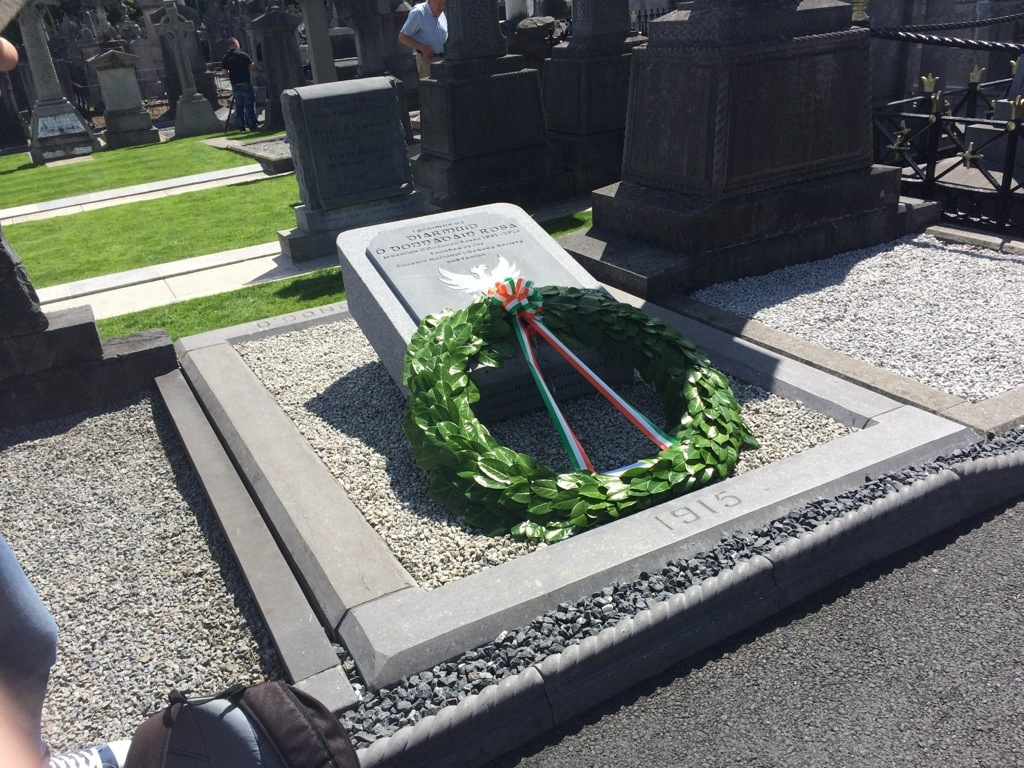 My thoughts were, the event was solemn, dignified and mannerly. A modern nationstate expressing its personhood and exercising a sacred ritual in a modest and non-belligerent way.

The minister in charge of events and Ulster Protestant Heather Humphrys has reiterated that commemorative occasions will always be “inclusive, appropriate and respectful.”

By and large these three principles were adhered to in this occasion, however as many unionists will point out, there is no getting away from the Irish State’s endorsement of dynamite, violence, murder and mayhem. Did I feel unwelcome or unaccomdated for? Not directly. There was no ill-intent at all, but it’s impossible to deny that the figurehead remained foreign to me.

The crowds encircled the burial site then dispersed from the grounds. I followed the exiting attendees and delegates and made my way into town to city hall. There on Dame Street was the parallel commemoration organised by Sinn Fein.

As I approached it sounded like the Twelfth of July in Belfast, it looked like it except the colours were different. Big shinners banging their big drums every bit as triumphal and out of shape as the loyalists they reproach for being so very triumphalist.

It was eerie the similarity, a demonstration the vanity of small differences that we do assiduously cultivate. Ultimately, Orange and Green we’re all Paddies, only we can’t see it.

There was the horse drawn carriage, all black, just like the one that carried the cask in 1915. This was really detailed, almost ostentatious stuff. Members of the public and confused tourists were surrounded by people dressed in period costume, it was like being on the set of Peaky Blinders. Men dressed as Irish volunteers were on horseback.

In and among it all were the leaders of the republican movement, adding even more height to the occasion.

All the while this band banged their big drums, playing the same song over and over with the bass drum pumping the airwaves like a stethoscope.

Then the orders were given and the bandsmen and marchers assembled into place and the funeral cortège began.

I went aside for food then cycled up to the cemetary again. The Shinner set-up at Glasnevin was altogether different. Around the graveside it was more intimate, more like the actual funeral of 1915. The public could watch events outside on screens. Ticketed members of the public could get in and watch from afar. Then the luckier few could get up close.

Here there was a coffin in place with all the trappings just as there would have been in 1915. 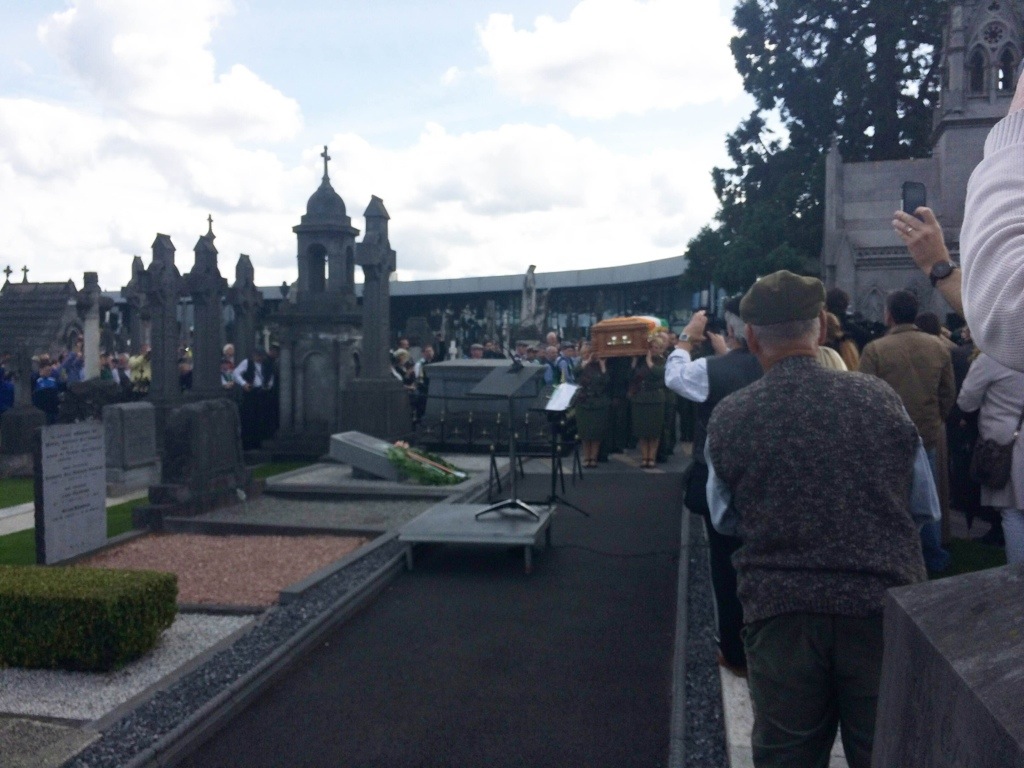 This occasion and his speech, in contrast to the State’s event, was altogether different. He praised O’Donovan Rossa in more explicit and contemporary terms. He drew a line of succession from Rossa to Pearse and right up to Bobby Sands, for whom he had much to say. Adams jibed and sarcastically congratulated the government, “The fools. The fools. The fools”, for endorsing O’Donovan Rossa’s methods, echoing his blog post on ‘The Good Old IRA‘ as he tries to crow bar the Provisional IRA campaign of homicide, bombing and assassination into the acceptable mainstream of republicanism. Something even the leader of Fianna Fáil Micheál Martin stridently objects to. Adams bellowed:

“Today is a reminder, as the events of the Centenary of the Easter Rising in the coming months will be reminders, that the business of Pádraig Mac Piarais and James Connolly and Constance Markievicz and Bobby Sands and Máiréad Farrell is unfinished business. Some people in high places do not like to be reminded of that unfinished business.” 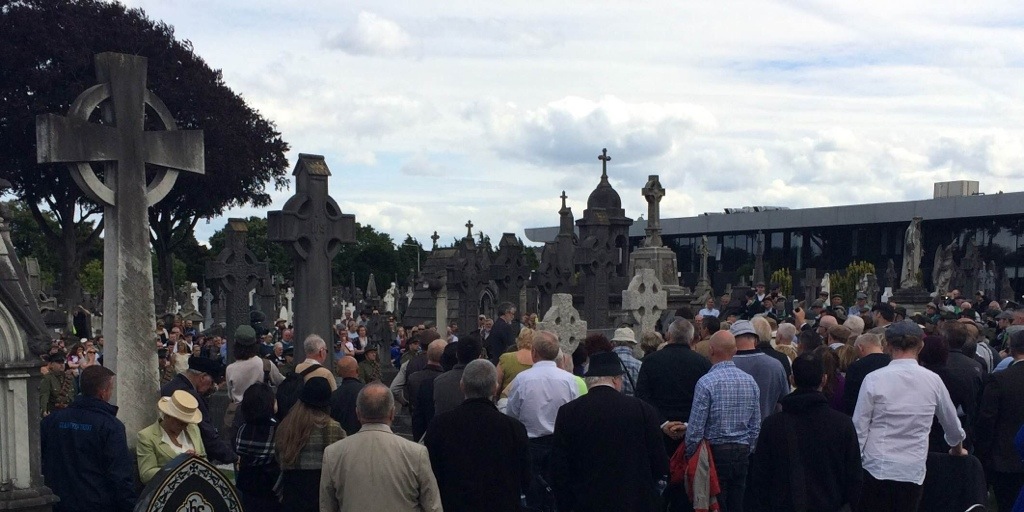 After Gerry’s bellicose eulogy to the old Fenian and Bobby Sands, to “The fools”, and to “the unfinished business” there was the Sinn Fein re-enactment of the Pearse oration. Following the trend already set this one was louder again, more Mel Gibson then the State’s.

Thereafter there was the replaying of the gun salute, then the re-enactment of the commitment of coffin to the earth. Like 1915 this was a show of strength and intent.

I left at this stage and returned to the city centre, the great and plural and enlightened European metropolis. There’s me then, a Northern Ireland prod, sitting in Dublin sipping the “protestant porter” Guinness trying to work it all out.

It’s open season in the south. The republicans are at open conflict over who is the rightful heir to 1916 and the republican tradition, and commemorative events are the tools of combat. Within this playing field are the broadly acceptably limits of Irishness as recognised within the Irish State. We protestant unionists are like an invisible Venn diagram whose tradition must be respected but which is only secondary to the core pillars of the Irish narrative.

I’m confidently British and comfortably Irish, and vice-versa, but I fear the vanity of republicanism will simply alienate the not-insignificant number of people on this island who find the armed struggle, past and present, anathema. I am stuck to see how Ireland can cherish its Republicanism but also embrace and value the Royalism of the North.

At the start I said there is a perception that there is no real and actual accommodation of the Orange and Protestant in the current Irish narrative, and countered with a question: Or is there? My experience of the day is that that perception was lived out that day, to an slight degree in the state event, and openly and proudly in the parallel event in the afternoon.

If Ireland and Irishness is to work and be agreed we require malice for none and charity for all, we need a “ethical Irishness” as Michael D. Higgins often reiterates.